Submarine Deluxe: An LSX jawbreaker shimmers just beneath the surface 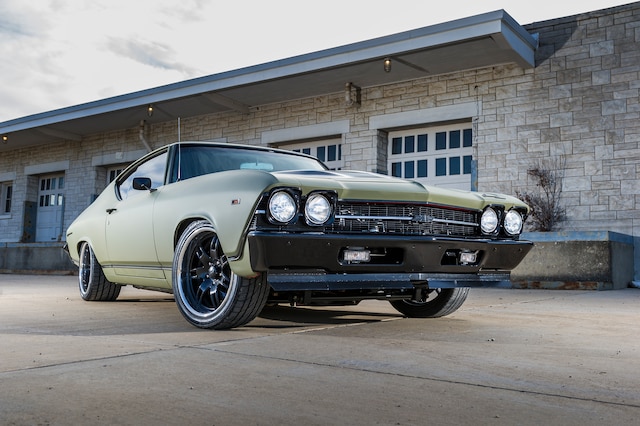 “For the past few years I’ve been trying to find the perfect, classic muscle car,” proclaimed Zach Archer. “I’ve tried [vintage] Corvettes, Camaros, and Mustangs, and even the current models. After many disappointments trying to find something that made me happy, my buddy Javier Leclerc from DI Motorwerkz got tired of advising me on what to buy or not to buy.”

Javier was weary of it but motivated nonetheless. He had an idea: why not just put our heads together and build one. After much arguing, Zach decided to listen and began looking for a Chevelle. “My budget was limited. He told me I could have a boring, slow show car or a rough-edged, imperfect, pissed-off performance car. I opted for the latter.

“We found this 1969 Malibu on Craigslist. We sat down and reviewed the options based on the desire for the best mechanicals available. He told me that with the money I had to spend, the project would be tight. Cautiously, I began to cut him loose. I was skeptical on how he wanted to spend, especially after the car was almost done … and I was almost out of money. Regardless, the car turned out amazing mechanically but it didn’t look very good. I had no more money for cosmetic work.”

Javier looked Zach in the eye and told him to come back in a week … then he kicked him out of the shop. When Zach returned he was amazed by what he saw and then floored by Javier’s fiscal responsibility. “He wasn’t painted. He chose to vinyl wrap the car. He turned all the brightwork black.”

All this played right into Zach’s desires. “I wanted to have an old muscle car that could keep up with modern sports cars on the road course … and do it on a budget.” How did he get this way? He wanted to emulate his father. “I used to hear stories about my dad street racing a 1969 Camaro back before I was born. After seeing the pictures of his cars, I was hooked and couldn’t wait to be able to afford my own some day.”

So … the Internet Malibu had an essentially rust-free body but was without much else—no powertrain, interior, or suspension so it represented a clean and eager palette awaiting suggestion and nuance. Zach and Javier got the machine in motion, beginning with the nether regions, the stuff nobody sees.

For the meanwhile, Javier put his faith in the integrity of the original, untouched framerails but they stacked it with high-quality tubular suspension components from Detroit Speed, a Moser Engineering 12-bolt, and big Wilwood binders. “Eventually,” said Zach, “we’ll box the frame and brace the corners.” That’s probably a real good idea because we have a notion that he’ll be looking to bump up engine output to a level of sickness that you wouldn’t want a civilian to see.

Mugged by the LS virus, Zach wanted a mighty LSX conversion, as interpreted by Mast Motorsports. Though naturally aspirated, the 454 maintains a high static compression ratio, a high-end forged rotating assembly, a custom-grind camshaft, and Mast Black Label cylinder heads with mondo intake valves. The induction system includes a big carburetor on an open-plenum intake manifold and an aftermarket stand-alone engine controller rather than a conventional distributor/coil conversion. Output is generous: about 650 lb-ft at 5,500 and nearly 750 horsepower at 7,000 revolutions. Before that puppy went into the hole for good, Midwest Classics in Edmond, Oklahoma, basted it with red sauce.

Javier shuttered the maw with an Auto Metal Direct steel 2-inch cowl hood. He built and positioned a chin spoiler beneath the grille and continued the theme with an adjustable, custom deck wing. He shaded all the brightwork with dabs of black powdercoat, including the original bumpers, grille, door handles, body script, and sideview mirrors. Javier knew it would contrast beautifully with the Army Battle Green vinyl that wrapper Rick Crowe completed over in Oklahoma City. See how swell it all looks against the very dark Rushforth hoops?

Javier prepped the interior with LizardSkin spray-on insulation, made a custom console with a cup holder or two (one of ’em looks like it’d take a Red Bull). He installed the American Autowire harness, then the audio system and the Vintage Air HVAC system that he enhanced with Astro vents. The Corbeau buckets are draped in cloth and vinyl and bookended by OE door panels. A bright billboard of Auto Meter gauges contrasts the gnarly VMS shift lever. By anyone’s estimation, the place is pin-neat and serene.

Zach had two seminal experiences with the Chevelle, things that he will probably never forget: working on the project alongside Javier and sitting for the first time behind the wheel of a car that had everything he always wanted. He was happy. He was able to stay within his budget for performance and streetability without having to give anything up. As for Javier’s philosophy and physical talent, Zach gushed, “He stretched my budget and gave me an incredible machine that sounds pissed off all the way to 7,250 and handles like a new Camaro. I can’t wait to take it to the track!”

If you want your 1969 Chevelle to run low 8’s then you need big-block power boosted with a pair of turbos.