Take Two: A Camaro that shows you sometimes have to go back to go forward 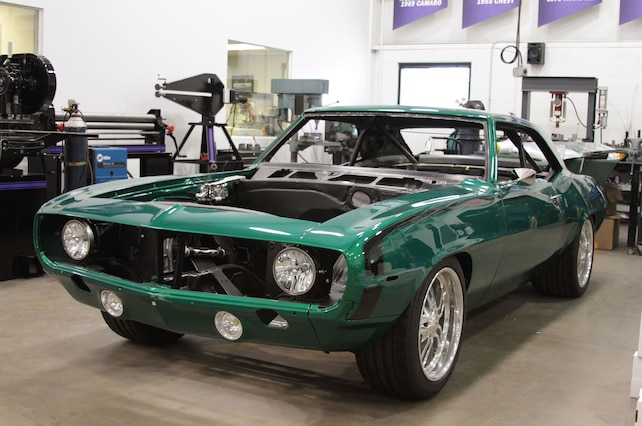 Sometimes projects get started, move along, and then hit a stage where you realize that it isn’t going exactly the direction you envisioned. At those moments it’s best to stop, regroup, and figure out how to get everything back on track. When Tommy Franklin’s ’69 Camaro arrived at Detroit Speed (DSE) it was nearly complete and had a majority of DSE’s components already installed. Heck, it was even already painted! After Tommy met with the DSE design team they all agreed to blast the Camaro down to bare metal and start over. The vision for the car was simple, everything in the DSE catalog would be thrown at the project and for grins they would mix in an overabundance of horsepower. Under the front there’s DSE’s Hydroformed subframe and out back resides a complete QUADRALink four-bar setup.

Between the fenders is an aluminum LS Next block topped with a Whipple 4.0L blower built by Brian Tooley in collaboration with Pat Musi, two names closely associated with big-power mills. Controlling what looks to be a 1,200hp engine will be a Holley Dominator ECU. Rounding out the performance upgrades will be a full set of Forgeline Dropkick wheels and set of huge Baer binders to keep this street beast in check. To keep track of this killer project be sure to visit detroitspeed.com.