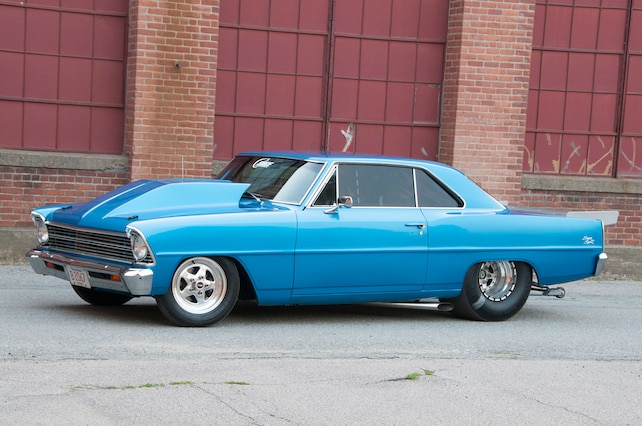 It all started with a visit to New England Dragway South on a hot summer day in 1964. Mike Pavone of Roslindale, Massachusetts, sat at the kitchen table, hopping up one of his slot cars as the AM radio crackled to life with the announcer screaming out the legendary battle cry of Sundaaaaay! The excitement of the radio ad immediately caught the youngster’s attention, but at 8 years of age little did he know that fate was about to change his world. Later that day, his older cousin Chris invited him to the local dragstrip for the first time.

Life-changing is the best way to describe the experience for young Mike, who quickly discovered that the tabletop kit models he had been building were actual race cars that burned nitro, spewed flames, and incinerated slicks as they launched from the line.

As the years passed, he spent plenty of weekends at New England Dragway in Epping, New Hampshire, critically watching Funny Cars under the stars as they lit up the night in a haze of nitro-induced flames. It wasn’t long till he hit high school and purchased his first car: a 1965 GTO packing a 389ci Tri-power V-8. It was also the same time that he met lifelong friend and fellow gearhead Bob Pucel whose knowledge and dedication to drag racing would help define his path into racing. A string of GTOs followed, but it wasn’t till he purchased a 1969 Hurst/Olds 4-4-2 that he started running at the dragstrip.

Like with many hot rodders, as life moved forward so did having a family and settling down to run a business. Mike always kept his hand in racing, although at a distance for a while. His pal Bob went onto establishing CE Racing Engines and it wasn’t long until Mike got back into racing in 1984 with a 1968 Chevy Nova SS. The car acted as a testbed for myriad engine combinations built by Bob, filling the framerails with small-block power topped with everything from single to dual quads, nitrous systems, and eventually a Vortech supercharger.

A few years ago he followed an idea that had been percolating in the back of his mind. He wanted to assemble a car that had plenty of driving dependability with a fierce attitude at the dragstrip. You know, nothing special; just your average 1,000-horsepower street car capable of running quarter-mile times in the 8-second range. He searched the Internet for a 1967 Chevy Nova SS and eventually located a big-block–powered car. Even though he had plans to ditch the driveline and up the ante with a hot small-block, a lot of the hard work had already been completed on the car, making for a simple transformation.

To handle stopping duties, Wilwood 12-inch front and 11-inch rear drilled and slotted rotors wear four-piston calipers with custom rear caliper brackets by SD Concept Engineering (SDCE) called to action. Linking it all to the street is a set of Weld Racing Drag Star wheels in 15x4 front and 15x14 rear sizes capped with sticky Hoosier rubber. Out back, the final icing comes from a set of custom-fabbed beadlocks by Exstreme Fab.

Having always raced small-block–equipped cars, his vision was to create the ultimate long-haul performance muscle car that embraced dragstrip capabilities, so he went to SDCE in East Providence, Rhode Island, and put together a plan to build a bulletproof mill with owners Wendy and Scott Dickenson. They mapped out the recipe for a hot twin-turbo combination. Scott got started on the bottom end with a 400ci Dart Little M Sportsman block, which he bumped to 401 cubic inches and then packed with an Eagle 4340 forged steel crankshaft linked to Scat H-beam rods capped with Diamond 8.3:1 forged pistons. A custom-grind solid roller stick from Comp Cams sets the beat while plenty of power comes from a set of high-flow, forced-induction aluminum cylinder heads from Air/Fuel Innovations (AFI).

Up top, Scott incorporated an AFI multi-port fuel-injection system featuring an exclusive three-piece design with a tunnel-ram–style intake base, mid plate, and upper intake manifold matched to an ACCEL Gen VII EFI fed by AFI fuel pumps. The crowning touch is a pair of Comp Turbo Technology 64mm turbos sparked to life through an ICE Digital Inductive Spark 7000E ignition. Spent gasses travel through a set of SDCE-fabbed production headers and exhaust to SpinTech mufflers. All the power flows through a TH400 trans from Dynamic Racing Transmissions, packed with a custom 3,800-stall converter from ProTorque, trans brake, and reverse valvebody linked to a custom driveshaft.

There’s nothing like starting with a clean body when you take on a build, and Mike’s car is razor sharp, making the perfect canvas for the custom-blended PPG Electric Blue vibe. Bitchin accents include a fiberglass hood and trunk lid from VFN Fiberglass, rear wing from Ed Quay Race Cars, wheelie bars, and drag chute from RJS Racing Equipment (added since our photo shoot).

Inside, it’s all business with the stock dash accented by Sport-Comp dials from Auto Meter while a Grant Challenger GT wheel plots the course with shifts moving through a unit from Kilduff. The car was rewired by Scott and team member Zack Hyland, who also lent a hand with the underhood upgrades. A 12-point rollcage certified to 8.50 e.t.’s resides inside along with Corbeau bucket seats armed with RaceQuip harnesses.

Mike’s dream became real in 2016 when the car ran an 8.67 e.t. at 158.15 mph at New England Dragway thanks to skilled driving and the dedication of his team at SDCE. During the season he went on to win the Power Adder Pro Class at the Mass Tuning Race Wars with a string of 8.67 e.t.’s in a car weighing in at 3,521 pounds. The next day he fired up the Nova and took a cruise to Cape Cod to celebrate. To us, that’s the true meaning of a well-balanced street car.

Richard Rossi wanted something more compact, more aggressive with power. So he went to NR Hotrods and had owner Nelson Rosado build a street ready 1966 Nova.

» Read More
From Forgotten To Showpiece, This 1967 Chevy Nova Has Had A Wild Ride