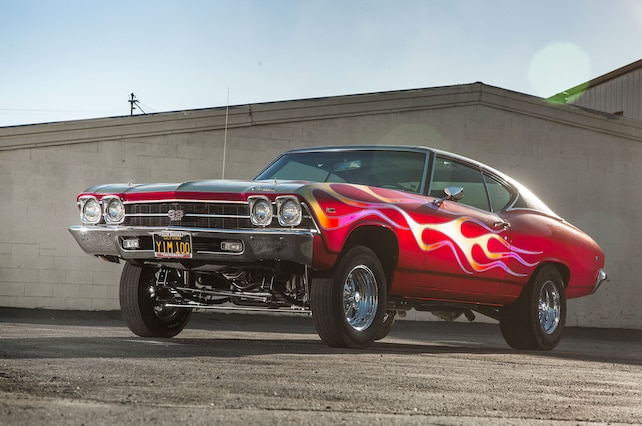 That’s what we called cars like this back in the day. Not crazy cars. Not sleds. Not even hot rods. We just called ’em street freaks; it rolled off the tongue well. In the usual swarm of plain brown wrappers, street freaks were as impossible to ignore as if they were covered in blood.

Street freaks attracted lots of attention long before there were wheeltubs or an inkling of a form called Pro Street. A lot of them sported a tunnel-ram intake or had a GMC supercharger ripping the hood; or they turned tires (sometimes slicks) so big that they stuck out in the open air. Often it was a combination of the two and appeared long before that heinous political correctness crap. It was a much simpler time then.

Though Lou Lafon is now the steward of this piece of history, 20-year-old computer operator Harris Kern of San Mateo, California, owned the ’69 396 SS in the early ’70s. Sometime in 1975, it caught the eye of Hot Rod editor Terry Cook and the “All-Purpose Supercar” wound up on the cover of the July issue. Aside from jacking up his Chevelle like a gasser, Kern used it for dependable transportation just as much as a dray beast—to tow “Dirty Harry,” his Rat-motored Sanger flat-bottom.

Lou was hanging out then. “My best buddy Craig bought the Chevelle from the original owner in 1978. I had a yellow 1969 Chevelle and our friend Rocky had his ’69 Chevelle. The three of us cruised El Camino in South San Francisco every Friday and Saturday night. The car was legendary. We took it to Fremont where it did 12.9 seconds in the quarter-mile doing 109 mph.

“I lost touch with Craig for 15 years and when we reconnected I found out that the car was being stored under blankets in a carport. I bought it from him, brought it home, and stored it in my garage until Bill had a space for me.”

The modern rendition was handled by Bill Ganahl at his South City Rod & Custom in Hayward, incredibly a mere three blocks from where Mike Farley sprayed the candy and the flames more than 40 years back.

Bill: “It was Farley’s first candy job and he wanted to make it memorable. So he did it 10 times until he was satisfied. Though the photos don’t show it, the car has a patina. When we checked out the decades-old paint we found a little bit of rash but decided it should remain that way for posterity. The thing’s a survivor, so we lived in that realm throughout, right down to the original Zolatone splatter on the firewall and inner fenders. Most of the trim and shiny stuff was upgraded. We sent some of it to Global Plating in Fremont to get refinished and the other parts we just buffed and polished.”

Lou: “My wife, Patty, found Mike and he surprised me and Bill one Saturday morning at Bill’s shop. He told us this was the first candy apple paintjob as well as the first flame job.”

Since the Chevelle has been riding the airwaves for such a long time, it naturally got noticed. And so it got published, appearing in the Car Craft Street Freak Performance Series Volume 1 Number 1, again in the October 1982 issue of Car Craft and then in the September 1992 edition of Super Chevy.

But from time to time the Chevelle still lives in the real world. “In 1982-’83 it took First Place at the Grand National Roadster Show,” said Lou. “I go to car shows, Coffee and Cars San Francisco, and I go to Hot August Nights in Reno. I go to Goodguys and any other shows I can get to.” And that’s the thing. Lou does not drive it at all unless he’s going to show it off. A short conference with Patty revealed that he’s way too protective of it to consider anything else.

Patty: “I remember clearly one day he was in the garage and our young daughter came up to the door with a stone she’d found and said she wanted to put it in Daddy’s car. She couldn’t quite reach the window opening and the stone hit the door, but didn’t do any damage. I think Lou cried for about a week. As a matter of fact, the car storage area is like his toy box … and the rest of us are not allowed in. When he puts the car away, he cleans it, puts 15 covers on it, then sweeps the floor and locks the door behind him.”

That’s the way it is with this survivor business. The owner gets a little weird and is doubtless a little anal-retentive. Though the car is necessarily sequestered, it often rolls at large under its own power, defiant and unfiltered like it always did, and with a very lucky guy behind the wheel.

If you want your 1969 Chevelle to run low 8’s then you need big-block power boosted with a pair of turbos.