1957 Nomad with Just the Right Amount of Modern Touches

Classically Modern: Dave Mock shows you can modify a classic without losing its vintage vibe 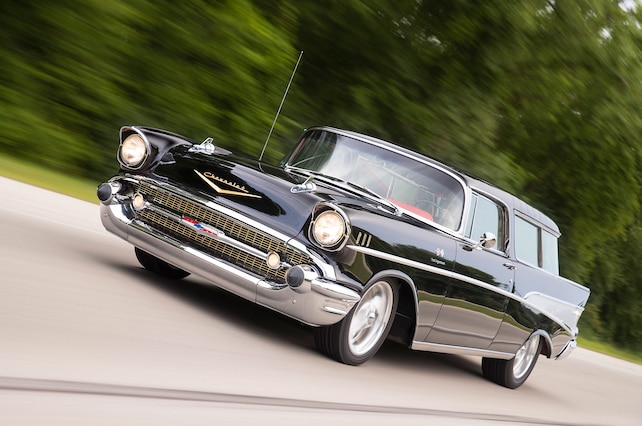 Dave Mock developed a passion for Tri-Five Chevys when he was still a child and, not surprisingly, his first car was a 1955 two-door hardtop. He bought it in rough shape in 1968 and learned the ins and outs of body, paint, and interior work in getting it fixed up. A string of other Tri-Fives followed, including a 1955 sedan and a 1956 Bel Air, and Mock furthered his education putting one after another into show-winning condition. After learning how to make his cars beautiful he mastered the art of making them fast, beginning with a 1964 Nova SS that he turned into a street terror in the Milwaukee area.

Building cars remained a hobby and small, part-time business until 1974, when Mock was laid off from his job as an electrician’s apprentice. Within a few months he made the life-changing decision to open his own business: DM Conversions (DMC), which was initially focused on building custom vans but soon expanded to include a wide variety of other vehicles. Among them were vehicles modified for disabled people, custom sport utility vehicles, commercial truck builds, and of course, custom cars. Over the years, DMC secured contracts with Ford, Chevrolet, and Dodge to build custom vans, established a sales network throughout the country and by the turn of the millennium had built more than 15,000 vehicles. The good times couldn’t last forever however, and by the early 2000s the custom van business declined dramatically. DMC adjusted their focus accordingly, devoting the bulk of their time, energy, and skill to building custom cars rather than vans, trucks, and SUVs.

With his focus back on cars, Mock decided to pursue one particular model he’d wanted his entire life: a Nomad wagon. His search led to the discovery of a ’57 in a barn in Germantown, Wisconsin. After decades in less-than-ideal storage it was in pretty rough shape, but the team from DMC looked past the bird poop covering the body and decided it was a good, solid car. Mock was torn between restoring his new acquisition to bone stock perfection or modifying it for enhanced performance. After mulling over the question for several months, and with input and encouragement from his employees, Mock decided to strike a balance by building a mostly stock appearing, modernized version of the rarest ’57 Nomad possible, one with fuel injection and air conditioning.

DMC’s Kevin Anderson worked with Mock to coordinate all aspects of the build, which began with the restoration of the body. Mike Bierer was the point man for that, and began by replacing the front floor panels, lower quarter-panels, rear floor section, and miscellaneous other damaged areas with new sheetmetal. The entire body was then totally stripped and chemically dipped before being refinished with BASF’s R-M Diamont line of undercoats and topcoats. Because he loves the design so much, Mock decided to leave the body entirely stock. The paint the restoration team reinstalled the re-chromed original bumpers and all of the refinished original exterior trim.

In keeping with the overall theme of the build, Mock and his crew restored the interior to look mostly original but with numerous modern conveniences. They custom-built new door and interior trim panels using the stock stainless steel trim, with the front armrests designed like those used in ’56 Bel Airs. Because he especially likes the way it looks, Mock decided to go with an American Retro reproduction of the 1960 Chevy steering wheel. The stock seat frames and springs were stripped and refinished, then covered with new foam and correct reproduction seat covers. “We thought about going with updated seats but didn’t because we wanted the stock look and feel. There’s something about sitting on those stock sprung seats that brings back a lot of memories,” explains Mock.

To further disguise some of the interiors’ upgrades, DMC’s techs fabricated a custom valance for the bottom of the dash. This valance houses the Trique Manufacturing air-conditioning vents and the JL Audio tweeter speakers while balancing out the A/C ducts and hiding the air-conditioner unit. A custom HVAC plate was put in place of the manual controls to house the electronic Vintage Air controls.

As he did with the remainder of the car, Mock chose to go with a modern engine wrapped in old-school visuals. The starting point was a complete, brand-new Chevrolet Ram Jet 350 mated to a 700-R4 automatic. The 4.000-inch bore and 3.480-inch stroke engine features a cast-iron block, Vortec cast-iron heads, cast-iron crank, powdered metal steel rods, hypereutectic aluminum pistons, and hydraulic roller cam. Right out of the box, this engine is made to look right at home in vintage cars with a port fuel injection system designed to emulate the look of Chevrolet’s Rochester fuel injection found on various GM vehicles from 1957-’65. The techs at DMC decided to make it look even more like a vintage Rochester system, starting with the plenum. They had Cindy at NVR Racing machine the plenum to DMC’s exacting specs so that the throttle body would mount on the side to look like the Rochester system’s air meter. Then, DMC furthered the illusion with a look-alike 1957 fuel-injection air cleaner setup they fabricated. And finally, they made adapters that permit a pair of ’57 vintage aluminum Corvette valve covers to mount on the new engine’s Vortec heads. After all of the work was completed, Scott at NVR Racing dyno-tuned the engine to make sure the custom induction system would deliver smooth and reliable performance.

To help facilitate the expulsion of spent gases, DMC installed Doug’s headers with 1 3/4-inch tubes and 3-inch collectors. They connect to a 2.5-inch stainless exhaust system from Pypes Performance Exhaust. The engine is kept cool even on the hottest days by a custom-made cooling system that features an aluminum radiator, electric fan, and polished stainless steel shroud extending from fender-to-fender. To complete the engine assembly DMC added a Billet Specialties front runner system, and to ensure a reliable supply of high pressure fuel they went with a Rock Valley stainless steel fuel tank with an integral pump.

From start to finish, it took about 4 years to complete this gorgeous Nomad. They could have built the car much faster, but only worked on it part time, always giving customer’s projects first priority. Mock and his staff at DMC are thrilled with the results of their efforts, and take great pride in the many awards the car has earned, including Best In Class trophies at both the Milwaukee and Chicago World of Wheels car shows. Even better than the accolades, however, is the satisfaction Mock gets from the collaborative effort it took to build this unique Nomad, and the joy that driving it brings him. “It was a total team effort and we accomplished our goal to build a modern version of the rarest 1957 Chevrolet ever built, the icon of classic cars,” he explains. “This Nomad drives every bit as good as it looks and it’s so much fun to drive, especially when I take my 15-year-old son out in it so he can experience how it feels to ride in a true classic.”

Tony Porter's 1957 Chevy Sedan Delivery is powered by a 350 small block and is one of two or three similar cars on Aussie streets. - Super Chevy Magazine

When Travis Endy set out to build his first car, a 1930 Ford street rod, he was 18 years old, fresh out of high school, and filled with ambition. All through his youth, his father, Jim, who is also a hard-core car guy instilled much of that automotive enthusiasm in him. Once he had a family to contend with his choice to move them about was this sweet 1955 Chevy Nomad.

John and his son JP wanted to build something a little different and a Duramax diesel-powered 1956 Chevy Nomad is just what the doctor ordered.

James Boitnott took a rusted relic and transformed it into a high-end Pro Touring machine, based on the sleek lines of a 1956 Chevy Nomad.

All the Nickey boys knew about the car was that it was a ’56 Nomad, and they expected the typical “barn find” project.