This Third-Gen 1991 Camaro Gets Serious in the Performance Arena 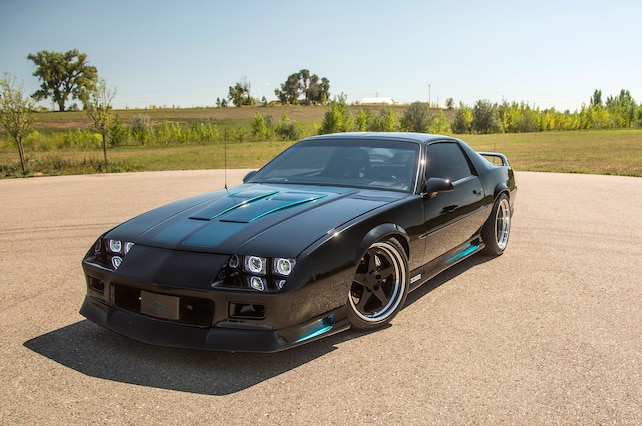 When you sign on for the ride, you probably think you have some idea of where the ride is going. But then again, you might not. Maybe you were lied to. But if it’s just that it turned out to be a little rougher than what you had in mind maybe no one would blame you if you quit.

Brandon Pursley never had any notion that it wouldn’t turn out well. He’s been fooling with cars since he was a child, beginning and practicing at his father’s trucking company. He says he has never worked in a position that didn’t involve cars, so it was contingent upon him to learn the angles and anticipate the pitfalls.

This is how he tells it: “In 2000, I was going to quit my job and was travelling to an interview when I spotted this car with a “for sale” sign on it in a parking lot. I had seen it before at a drag racing event. It was my mental dream car. I never went to the interview,” he said. “I went straight to the bank, and paid the owner his asking price. I stayed at my automotive job, which led me to my current career and family.”

He’s championed this special child for 17 years now. “It was my dream car,” he gushed. “This decision literally shaped the direction of my life and my career from that day forward.” He put bigger wheels on it and set the chassis with lowering springs. “I soon found that I enjoyed the challenge, that was much more exciting to me than trying to beat my friend’s dad’s wallets at the dragstrip so I focused on that as the primary direction.” There was another big reason for his resolution: he just didn’t have the bucks to build a good engine. But he knew that it was inevitable.

Even before the engine upgrade, there was the show car aspect. In 2003, Brandon focused on improvements that had to look as good as they performed, and if it didn’t appeal visually, it must be modified to do so. As such, there were many do-overs in the history of the campaign. He began with a 1998 Camaro donor, mainly for its coveted LS engine. Along the way, the stork delivered twin sons and upset the timeline for a long spell. Brandon simply parted out the Camaro and … studied on being a dad. Eventually, he went into the pit again and found a 2001 Trans Am, complete with a T-56 and got it for a steal.

He sent the lump to Lloyd’s Machine Service for some mild but pertinent changes. Lloyd’s balanced the rotating assembly and secured it with ARP fasteners. They tapped Advanced Induction for cylinder heads that were CNC-machined in selective areas. Then they spiked it with a livelier camshaft and added an LS6 intake manifold. They put the engine together. Then it sat for a year before Brandon (and friends Shawn Norton and Jeremy Wallis) had the time and wherewithal to move the project forward. “I promised my wife [Danielle] that the engine swap would take as little family time as possible and I kept that promise by going into work at 4 a.m., working on my lunch break, and sneaking out after the kids had been tucked in and then working through the night during the weekend. That was the most challenging part, balancing being a good father and husband and carving whatever free time I could make to work the car. And finding projects my kids would ‘help’ with and keep them entertained while I was working.”

Meanwhile, Brandon’s brain was cranking 6,000 rpm. With the engine temporarily mothballed, he concentrated on improving the appearance of the engine bay, erasing most of the cheap “stamped ’80’s” look. “I shaved the firewall, the fender side openings, and the battery tray and started filling holes. I put the custom-sized radiator under the core support to make room for the twin air intake snorkels sweeping toward the throttle body.” He treated the maw with PPG Black, the first time he’d triggered a paint gun in nearly 16 years, and contrasted the work with a scratch-built carbon-fiber apron. There isn’t a nook or a cranny on the Camaro that hasn’t been stroked; there’s so much stuff we don’t have room to say it all.

So you’ve got an inkling of Brandon’s veracity and his never-say-die demeanor. It’s one thing to put all the pieces together and yet another to faithfully cycle them naked on the tarmac out in the world.

As for that part about signing on for the ride, Brandon’s first excursion beyond his garage floor was an Optima USCA event at Pikes Peak International Raceway. “I drove the car all through the night back and forth from Wyoming to Denver to break the motor in. I washed it, changed the oil and did a thorough bolt check, then loaded it on the trailer and drove it to the track. The car ran great—OK, there were some small tuning issues, and I made some ride-height adjustments between sessions, but the late nights and the mad thrash worked out,” he rasped. “At the Denver Super Chevy show it was able to take First Place in the 1989-’92 Camaro category.”

Better yet for ol’ Brandon, it put a big smile on Danielle’s face when they went for the first banzai blast with the new drivetrain. Yup. Got that ride after all.