From the Archives: Vette Rod Test 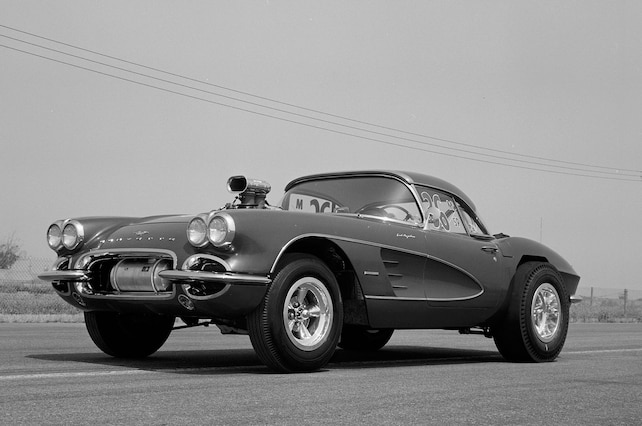 In the 1960s, Rod & Custom magazine would publish regular “Rod Tests.” These were like the road tests being done by the new-car magazines—complete with acceleration and braking data and a large spec chart—but were performed on hot rods, custom cars, and other hot iron of the day.

The magazine’s October 1962 issue featured such a review of John Mazmanian’s drag-race Corvette. A year before, Big John had purchased a brand-new 1961 model and immediately turned it into “one of the hottest Vettes in history,” as the magazine described it. He won his class at the first Winternationals in 1961, setting an AA/SP class speed record of 109.96 mph in the process, then returned to the 1962 Winternats having done some modifications to the car and set another record, 113.84 mph, in the CM/SP class. “These records still stand,” noted the magazine.

John wasn’t done with the Vette by a long shot. “Three months ago, with a different block mounted with a Hilborn injector, a GMC 4-71 blower and lots of Isky innards, the team came back to break 129 mph and 11 seconds. e.t. in the Modified Sports class.”

That “different block” was a 283 bored to 316 cubes and running a “wicked” Iskenderian Polydyne 505 camshaft, Cragar intake, Joe Hunt magneto, and Jardine headers. Mazmanian estimated the mill made 600 hp. “There’s so much power that the throttle has to be treated with an extremely light touch,” said R&C, “else the rearend fishtails completely out of control.”

When racing, that rearend was fitted with massive 10.00x16 Dragmaster slicks that required some inelegant fender trimming to fit. They and the front runners were mounted on hand-polished American Racing mags.

The car was definitely a looker, with a “flawless Kandy red paint job, custom (but stock looking) interior, special chute custom-tailored by Deist, and a long list of chromed and unchromed accessories” that earned the car a Third place trophy at the 1962 Winternationals car show.

When it came time to measure the Vette’s performance, R&C went with the 11.10/129.93 quarter-mile pass that the NHRA had recently clocked. As you would imagine, that easily eclipsed the 14.9/102.5 pass made by a fuel-injected 1962 Corvette that Motor Trend tested in its August 1962 issue. Yet Mazmanian’s Vette also out-braked that test car, stopping from 60 mph in 159 feet, 9 inches, compared to the fuelie’s 167 feet.

Mazmanian’s team mechanic, Dick Bourgeois, told the magazine John had “at least $10,000 invested in the car. John himself admits to $6,300.” So, the magazine wanted to know, “Why build a track machine that’s good only for quarter-mile drags when John could have the fun of driving this car anywhere for half the expense? Is it because he’s out only for records?”

Not at all, Mazmanian replied. “He likes the sport and likes to see it grow. He enjoys improving the breed. The money isn’t as important as the satisfaction of knowing he has an untouchable Corvette.”