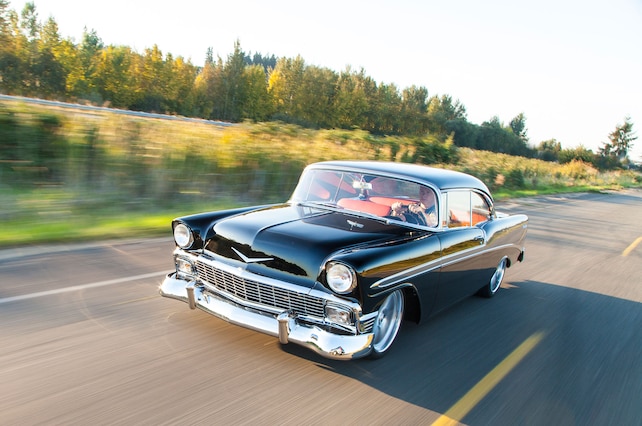 In the upper end of the old-car hobby, particularly the part with the historically significant cars, possession isn’t so much regarded as ownership as much as stewardship. It’s a slightly selfless philosophy that respects the chain of people who possess a vehicle over its lifespan. In it, a person basically acknowledges the fact that their time with a vehicle is temporary—the car almost always existed before they came along and it will possibly outlive them; they’re just taking care of it for the time being.

It’s an idea that probably never occurred to Jeff Zirkle when he went to look at a 1956 Bel Air that was up for sale. “The guy had the car for a long time,” he begins. “He was really into it; he made this rotisserie and whenever he’d have something chromed he’d put it on the car to check it then take it back off. He stashed parts in every nook and cranny in his house—under the beds and in various rooms. Like I said, he was really into it.

“But then someone special in his life—someone who was a big part of the car—passed away,” Jeff continues. “He got the project moving a couple of times but just decided it was time to sell it. I went to look at the car but I think he was actually interviewing me. He was trying to find that person who he felt deserved it.”

Even if Jeff wasn’t aware of the philosophy, he understood the significance behind it. “I have this 1955 convertible that I wanted to put on an Art Morrison chassis so Chris Holstrom arranged a ride with Art in his ’55,” he continues. “He took me to North Hill (a long, sweeping road north of Chris’ shop). He hammers down and I’m holding on to the seat asking if it’s going to break loose,” he says. “Jeff came back, ‘I wouldn’t take my BMW up that hill that fast!’” Chris says, chuckling. “But I got to thinking of that convertible—I just couldn’t bring myself to tear that apart,” Jeff admits. “I didn’t want to be that guy. I mean, yeah, I would’ve ended up with a nice car, but I would’ve started with a nice car.”

This realization was what led Jeff to cross paths with Brian Beers, the Bel Air’s caretaker. Solid, with two of almost everything—most of that already finished—the car was going together as a hot rod. “It was even mini-tubbed,” Chris indicates. “He was going for more of a driver but I told him what we planned,” Jeff says. “He was all right with that.”

Starting with the chassis, it’s one of the Art Morrison GT Sport editions but with Baer six-piston calipers and 14-inch rotors. Those mount behind a set of 19x8 and 19x12 Forgeline CF3C wheels with 245/35 and 325/30 Michelin Pilot Sport hides, respectively. Jeff popped by the local Chevy dealer for a GM Connect & Cruise package: the LS3/4L65E combination.

Rather than just put a cone filter at the end of a bent tube, Holstrom’s guys made a duct system that goes to an airbox immediately ahead of and below the radiator. Holes in the panel just below the radiator reveal the Porsche 928 filter element.

Externally, the car remains entirely stock. And it’s easy to understand why. Chris says, “It’s all factory trim on the car, nothing aftermarket except the grille [most likely a stainless unit from Eckler’s]. Every part had a story. He was real particular about that and he worked hard.”

The inside tells a different story. Chris Greene flattened the firewall, made inner fender panels, and finished the trunk with more tin paneling, all things done largely for function.

Doug’s Auto Collision Center prepped and shot the car. “I think everybody wrestles with color,” Jeff proposes. At one point he bought some touch-up paint in Space Grey, a contemporary BMW color. “I was on my phone on a business call when I painted the top of my stapler with it,” he says. “I still have that stapler—there’s my color combo: gray and black!”

The Dakota Digital VHX gauges plug directly into the drivetrain harness. Like that gauge combo, the rest of the interior appointments add function without necessarily altering the car’s image. If you didn’t know it, you’d swear the Vintage Air’s panel and vents are factory, the same for the Custom Autosound head unit. Nobody’s aware of the power window origins, but the Electric Life switches use the factory handles. Finally, Jamie at McFarland Custom Upholstery trimmed the cockpit in a combination of solid and perforated leather from a Mercedes-Benz application.

Jeff Zirkle will tell you that he didn’t set out to satisfy anyone but himself by doing the things he did to his car. But it shows that doing good for yourself needn’t be at odds with respecting a car and its other owners, past and future. Just don’t hold your breath waiting for him to turn it loose. Chances are he’s gonna call it his for some time to come.

A massive fabrication effort, eight months, and a SEMA deadline helped this amazing 1956 Tri-Five Chevy to come together for Meghann Hocking and Chad Price.