Alloway-Built 1972 Corvette Is All About the Hot Rod Rake

Jackrabbit in Black: It’s All About the Hot Rod Rake 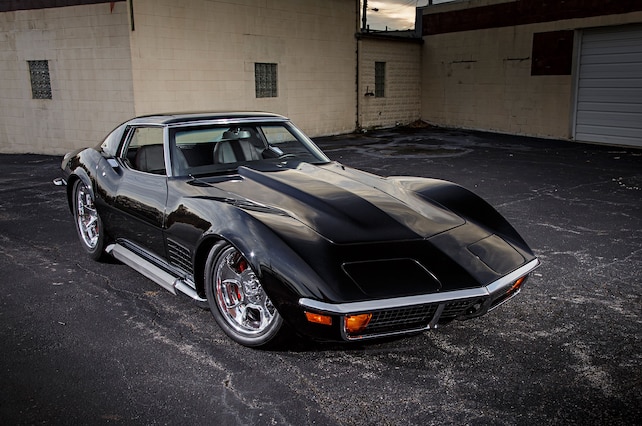 From the Corvette’s earliest days as a prototype developing in Flint, Michigan, the Corvette has been a natural to hot rod since the day it was born. In 2017, the tradition of the hot rod Corvette is alive and well in Louisville, Tennessee, at Alloway’s Hot Rod Shop. “The same but always different” describes the uniqueness of a Corvette built to Alloway’s Hot Rod Shop’s timeless specifications. “It’s a signature stance that’s almost cartoonish,” yet very functional, stated George Lange, owner of the 1972 Corvette coupe gracing this month’s cover of Vette. George Lange is a longtime friend of Bobby Alloway and owner of several cars that Alloway’s Hot Rod Shop has constructed, and has described the creative process as follows.

“Bobby starts with an empty body shell, minus the chassis, positioned exactly at the desired stance on wood blocks and then rolls fat tires on wide wheels underneath.” Alloway’s ritual of allowing weeks or even months with the big ‘n’ littles perched under a mockup to observe if the look is right is not unlike how Frank Lloyd Wright evaluated the livability of his iconic architectural designs.

After scrutinizing that the stance was right and determining exactly how to achieve it, the build order for the chassis went to Art Morrison Enterprises (AME) in Fife, (Tacoma) Washington, for the foundation of George’s 1972 Corvette. To accommodate the large, hooped, deep-dish wheels; extra wide tires and slammed nose Bobby likes it requires Alloway’s Hot Rod Shop to move the parallel front framerails 4 inches closer together. The 4-inch squeezed front ’rails allow for maintaining a tighter turning radius while driving low.

George explained his 1972 Corvette has as much front end ground clearance as his new Porsche and doesn’t require any extra caution than the Porsche to avoid scraping its nose on the ground. The rear AME framerails arrive 2 inches narrower than a standard Morrison GT Sport chassis; however, the rear suspension on the Alloway special ordered chassis utilizes the same triangulated four-bar with Strange Engineering adjustable coilovers found on a GT Sport. The live axle differential is a Currie 9-inch with 4.56 gears, 31-spline axles and limited slip. Wilwood 13-inch discs with four-piston calipers comprise the rear brakes with six-piston calipers on 13-inch discs up front. To pump the brakes a stock 1972 Corvette pedal trap operates a Wilwood master cylinder. A hallmark of Alloway’s design is the proprietary Alloway five-spoke mags by Billet Specialties. The front wheels are 17x7 and the rears are 20x10; all four mags don BFG g-Force T/A radial tires with 225/45/17 at the front and 295/45/20 in the rear.

Under the 1973 Corvette hood, replacing the original 1972 hood, beats the heart of a 2015 Chevrolet Performance Anniversary Edition 427-inch ZL1 big-block engine. Yet another Alloway hallmark is a great sounding, lumpy idle cadence and that’s thanks to a custom-ground COMP Cams bumpstick with a proprietary profile by Mylon Keasler of Keasler Racing & Machine of Maryville, Tennessee. A Vintage Air Front Runner serpentine belt system drives a Sanden A/C compressor, power steering pump and Powermaster alternator. For exhaust, the 1972 went to Barillaro Speed Emporium for headers and pipes, followed with a silver ceramic coating by Gene Mobley at Performance Coatings. The factory-style side pipes are custom made of polished stainless steel. A Steve Long of Indianapolis custom-made radiator keeps the 427-inch ZL1 running cool. American Powertrain was the source for the TREMEC TKO 500 five-speed transmission.

Unlike a typical Corvette restoration where extensive body damage is usually the case, the paint and bodywork on the 1972 didn’t require new reproduction fiberglass body parts to be grafted on then finessed until undetectable. The major part of customizing George’s 1972 was converting the coupe from T-tops to a Targa top. The Targa top was constructed by sectioning the front half from a convertible factory hardtop providing not only the panel but also the necessary windshield latches. The coke bottle shape of a 1972 Corvette convert is more pronounced toward the rear window on a factory removable hardtop than a T-top coupe. The two fiberglass T-tops were joined in the center with fiberglass mat added to correctly bridge the width, and then the front section was bonded together with additional fiberglass mat.

Bodywork and paint were entirely handled in house at Alloway’s shop. Clausen’s Sandy high-build sprayable polyester plastic filler was sprayed on all the fiberglass and steel surfaces. The body was tightened down snug to the chassis, ensuring all the gaps lined up and then block sanded until it was perfectly straight. From there on it was PPG products all the way from the Alloway Jet Black basecoat to the clearcoat. In addition to Alloway’s Scotty Troutman painting the body from top to bottom in PPG Alloway Jet Black, the ultra-glossy PPG black was sprayed on the fully smoothed Morrison chassis and related parts. Nothing contrasts better against deep gloss black than brilliant chrome-plated parts. Dan’s Polishing in Adamsville, Tennessee, dipped the triple chrome plating.

Corvettes have been raced, customized and modified since their introduction in 1953, and when the 265-inch V-8 was introduced in 1955 the floodgates opened. Bobby Alloway isn’t the first guy to customize a Corvette, but the Corvette creations Alloway’s Hot Rod Shop produces have propelled the Tennessee builder into becoming one of the best known and sought after for his distinctive designs.