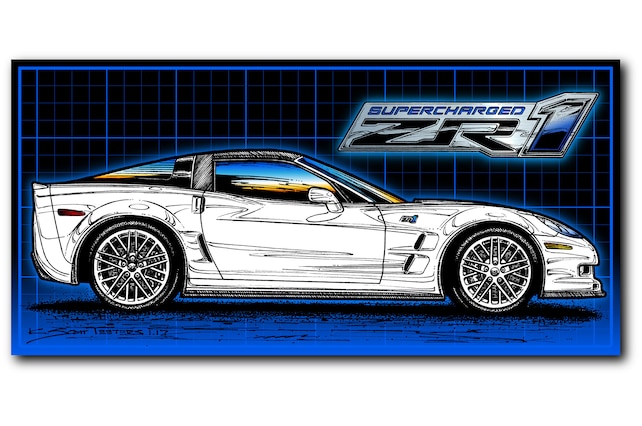 Back in November when I wrote the Illustrated Corvette Series No. 238 (Apr. ’17), the Corvette community was anxiously waiting the C7 ZR1’s grand debut at the Detroit International Auto Show in early January 2017. But a few weeks before the event rumors started circulating that there would be no C7 ZR1 debut, and that the new ZR1 “might” debut at Daytona or some other big racing event. So, all we can do now is speculate and wait. We’ll see the C7 ZR1 when Chevrolet is ready to show the car. In the meantime, let’s take a look back at the last ZR1, which was a spectacular machine.

In 2007-2008 no one was pining for a factory Corvette with more power than the Z06. But when official word broke that the resurrected ZR1 moniker would be packing 638 horsepower (133 hp more than the Z06’s LS7) and 604 lb-ft of torque (134 lb-ft more than the Z06’s LS7), heads just about imploded! That’s 638 net horsepower. Back in the olden days, published engine horsepower was larger “gross” horsepower, as the engines were measured without any power-robbing, add-on devices or exhaust system. What would the C6 ZR1’s LS9 engine measure out in gross horsepower? At least 700 horsepower, but we’ll never know. However, the ZR1 wasn’t just a Z06 with more power, it was the fiercest factory Grand Touring, GT Corvette ever built.

When the C6 ZR1 was in its development phase, I’m certain that the product planners were aware of the biggest complaint about the previous ZR-1: its looks. The car was mechanically awesome, but—from 1990 to 1993—almost indistinguishable from a regular Corvette. This is not the case with the C6 ZR1. Using the basic Z06 widebody, designers hit five areas: the hood, front splitter, front fender vents, side rockers and rear spoiler. The hood was the most obvious. Not only was it taller and wider, the top surface had a Plexiglas panel that showed the top of the supercharger cover. The front fascia of the Z06 was already low, but designers took a page from the C6.R race cars and added a full wraparound splitter. The side vents were larger and more pronounced. Attached to the side rocker panels were ground effects skirts. And bringing up the rear, the ZR1 sported what looks today like a very tame spoiler; but in 2009 it was very cool. What’s not obvious about the C6 ZR1 was the extensive use of carbon fiber. The entire front end and roof section was carbon fiber. Chevrolet decided to showcase the new material by applying $60,000-per-gallon clearcoat to the carbon-fiber front splitter, side skirts, and roof panel.

The new ZR1 couldn’t have much more exotic hardware. The all-aluminum LS9 engine is not only supercharged, it has an intercooler, port fuel injection, a 10.75-quart dry-sump oil system, and a LUK dual-disc clutch. The TR-6060 six-speed transmission has been beefed up and the gear ratios are closer than those in the Z06.

Let’s talk about wheels, brakes and suspension. The Speedline forged aluminum-alloy wheels measure 19x10 in the front and 20x12 in the rear. The Michelin Pilot Sport tires measure 285/30R19 on the front and 335/25R20 on the rear. The brake system uses Brembo carbon ceramic rotors that are vented and cross-drilled, measuring 15.5x1.6 inches in the front and 15x1.4 inches in the back. Six-piston calipers are in the front and four-piston units are in the back. The brake pads are twice the size as those used on the Z06 and will last a lifetime for street use. The basic Z06 suspension uses the next-generation Delphi Magnetorheological (MR) variable shocks, softer springs, larger antiroll bars and revised rear suspension geometry.

Looking back at the five years that Chevrolet offered the C6 ZR1, one thing is missing … racing. The C4 ZR-1s saw track battle thanks to Morrison Motorsports and the smashing of a 50-year-old 24-hour speed record with an average 24-hour speed of 175.885 mph in March 1990. The Mobil 1 and EDS-sponsored ZR-1 was race-prepared, but essentially stock. But a C6 ZR1 was never fielded for such a speed record attempt. Perhaps Chevrolet felt they were getting enough attention through the C6.R Corvette Racing Team. A definite possible explanation for the lack of a racing C6 ZR1 could have been the supercharged LS9 engine. Could an LS9 stay together in a long-duration, high-speed endurance event? Ah, that’s doubtful.

Another thing that never happened was a top speed attempt with the LS9’s governor removed. The twin-turbocharged, L98-powered 1988 Callaway Sledgehammer lapped the Transportation Research Center in Ohio at 254.76 mph. This car was driven to-and-from the track. That is insane speed and perhaps no one really wanted to try it in a ZR1. However, the C6 ZR1 did see some astonishing numbers on the dragstrip. Lingenfelter Performance mildly modified a 2009 ZR1 and on December 9, 2009, had a best run of 9.813 at 145.74 mph. High 9s in the quarter-mile was Pro Stock drag racing territory back in 1970.

Lingenfelter installed an 8.5-inch diameter harmonic balancer and a 2.60-inch supercharger pulley to speed up the supercharger. They also installed a low-restriction air filter, ported the stock throttle body and doubled the capacity of the intercooler. The modified LS9 netted 739 rear-wheel horsepower and 720 lb-ft of torque. M&H Racemaster slicks and skinny front tires were also added. The car was not gutted and had all of its standard ZR1 creature comforts.

So, my final analysis of the C6 ZR1 is that while the car was GM’s flagship performance car for five years, during which time the LS9 was the most powerful engine GM ever made, the ZR1 was, in the end, a true GT, Grand Touring car. A classic GT car has a strong chassis and suspension, great brakes, plenty of power and distinctive looks with hints of a racing car but it’s a car that one could take on a long trip and be comfortable. You could argue the case that all modern Corvettes are GT cars, but the C6 ZR1 was at the pinnacle of GT Vettes.

The C6 ZR1 also had the honor of being the most expensive Corvette ever offered. The base price of a 2009 ZR1 was $103,300, and by 2013 the price was up to $112,575. While the C6 Z06 had a total of six special editions, the ZR1 only had two: the 2012 Centennial Edition and the 2013 60th Anniversary option. In both cases, these options were available on all Corvette models for 2012 and 2013 and not limited edition models. Perhaps Corvette product planners felt that the ZR1 was already expensive enough.

C6 Corvette ZR1s had a total of five different wheels, with the chrome 20-spoke wheels by far the most popular with 3,377 optioned that way. The least popular wheel was the Machined-Faced Cup-Style Aluminum wheel in 2012 and 2013, with only 71 ordered. All of the LS9 engines were handbuilt and Mike Priest holds the record with a total of 57 LS9s built. Aside from the typical running changes and minor fixes to the basic C6 structure and options that came and went, the C6 ZR1 was virtually unchanged throughout its production run.

Chevrolet seems to have settled into a pecking order of its Corvette monikers. Grand Sport is the badass street Vette, Z06 is the quasi-race car Corvette and ZR1 is the advanced technology Vette. While we were disappointed that the C7 ZR1 didn’t debut at the Detroit show, rest assured that Team Corvette is just making the next ZR1 absolutely the best!