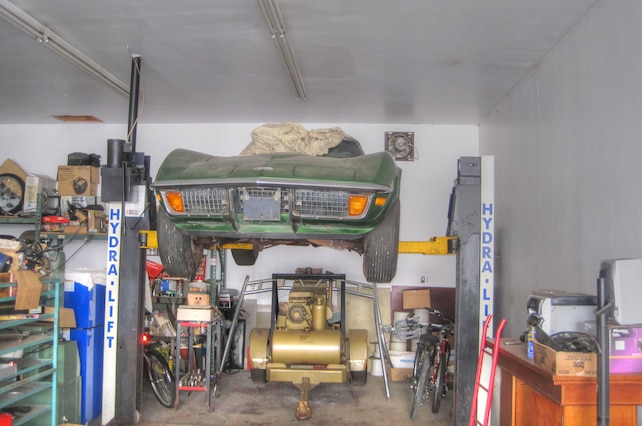 David Hallman buys old Vettes to fix up and sell. The Ottawa, Ontario, Canada, enthusiast never could have imagined a trip to an automotive shop a few years ago would lead to what just might be the lowest mileage, 100 percent stock and “un-wrenched upon” 1972 Vette coupe in the world.

“I bought a 1968 Vette and was having some problems getting it serviced,” Hallman told us. “Somebody suggested I try Actek Auto, right here in Ottawa, where there are some old-school mechanics. The owner is Ernie Finateri, an old Corvette guy I used to race in the 1960s and 1970s. He fixed the 1968 and we got to be friendly. He told me he had his own collection of vehicles.”

One of them was a 1972 T-top coupe that Finateri bought from the bank as a repossession in 1973 and had stored ever since. The Vette was raised high in the air on a lift and almost entirely covered by a tarp.

Looking up, Hallman could make out a layer of surface rust. The car looked like a time capsule when they threw back the tarp to partially uncover the body.

Right on the spot Hallman said he’d buy it. But Finateri wasn’t prepared to sell his gem.

Hallman kept going back to the shop over the next three to four years and reasserting his interest to buy the low-mileage 1972. The answer was always no, but Hallman did manage to buy several other old cars from Finateri’s collection.

“He liked to sell things in packages,” according to Hallman. “About a year ago I bought a 1969 Camaro Pace Car with 6,000 original miles that had been a drag car. A 1973 Corvette was part of that deal.”

Then, this past fall (2016) Finateri closed down his garage after 30 years. He needed to make room in one of his storage garages, which housed his wife’s 1995 Corvette and the 1972.

Finateri named his price. The two shook hands. Hallman tried to put down a deposit, which Finateri said was not necessary. In fact, Hallman says somebody else found out about the 1972 Vette later and called Finateri with an offer of more money, but he said no, citing the old adage … a deal is a deal.

The 1972 Vette is a coupe with the 200-horsepower 350/automatic loaded with power steering, power disc brakes, tilt and telescopic steering wheel, T-Tops and flip-out back window. The engine still carried its original stickers, as did the shocks and springs. The car even wore its factory shod bias-ply tires on the front, with snow tires on the back that have been on the car since 1972.

Hallman was pleased to find the original spare tire that had never been out of the boot. Likewise, the jack appeared to have never been used. The clock still works inside, same for the cigarette lighter and gauges. The Elkhart Green paint is original, which buffed out like new.

Squirrels had made a nest in the area behind the seats. The car had been stored with a cover, but the windows were left in the down position. Hallman says the shop dog was pretty interested in the car. Apparently, he could still smell the varmints, even though they were long gone. After steam cleaning, Hallman could not find a crack or a mark on the interior, which now appears as it came from the factory.

Hallman did not want to disclose the dollar amount, but he says he didn’t steal the Vette. He paid a “competitive price.” In January 2017, he brought the car home.

Hallman drained the old gasoline from the tank and installed new fuel filters and a battery. To his surprise, with a few turns of the crank the 350 fired right up, blowing out the old mufflers, which were rusted solid.

Even though Hallman buys and sells old Vettes, he plans to keep this 1972 and have it judged in 2017 by the NCRS as a Survivor. Club members have already advised Hallman to keep his 1972 Vette as original as he possibly can.

Hallman first got a look at the ’72 Vette raised high on a lift and with “a nice layer of surface rust on everything.” With the tarp thrown back, Hallman said the car looked like a time capsule. He said he’d buy it right away, except the owner wasn’t ready to sell.

On a cold and snowy January day in 2017 they loaded the 1972 time capsule onto a flatbed. Hallman remembers being worried. He said, “The last thing I wanted to see was him going off into a ditch and dropping this car on its side after chasing it all these years!”

The 350 is the 200-horsepower base engine with automatic, seen here as found.

A yellow sticker on the front of the passenger-side valve cover reveals code “CKX” for the 8.5:1-compression 350 four-barrel engine rated at 200 horsepower and tuned specifically for the TH400 automatic.

Hallman was pleased to find the interior dusty, but otherwise needing a good cleaning to look new.

The speedometer and odometer read in miles: 3,749, probably the lowest mileage 1972 in existence.

This National Parks (Parcs Nationaux) pass on the lower left edge of the driver-side windshield is dated 1972.

The brakes had seized after over 40 years of no use and had to be replaced.

Washing and waxing brought out the shine of the original Elkhart Green paint.

The 1972 Vette looks and drives like a brand-new car.