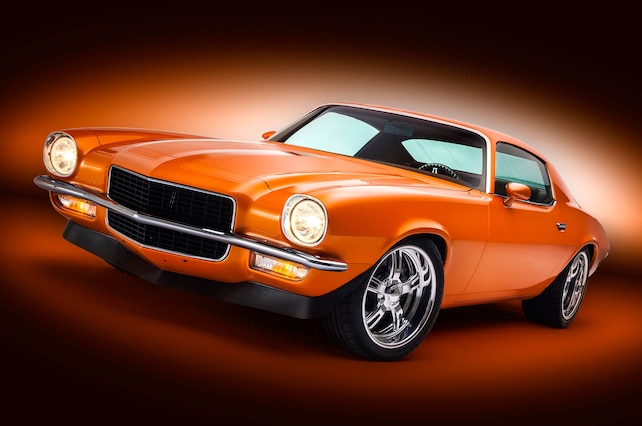 Finding an all-original muscle car from the late ’60s or early ’70s is a great place to start, but what you do with the car next is up to you. Some people like to relive the car’s glory days by leaving it in, or restoring it to, its factory condition while others want a little more out of their American muscle. Steve Aguilar wanted a little more out of his newfound 1971 Camaro Z28.

In 2012, Steve started out looking for a Pontiac GTO, but when he came across this ’71 survivor on eBay, he just couldn’t resist. The car was all original and had full documentation from when it left the factory over four decades ago, even after having gone through six owners before Steve got his hands on it. He contacted the owner, haggled the asking price down an impressive $4,000, and took the Camaro home. So much for the GTO; this was much better.

From the beginning, Steve knew he would be changing a few things up. First of which was the interior and paint. “I wasn’t crazy about the color combo,” recalls Steve, which consisted of blue paint with black stripes and a gaudy blue-cloth interior. Before the year was over, Steve had the Camaro in the shop for new paint and interior.

Six months later, he got the Z28 back and enjoyed it for a year and a half, taking it to various car shows near his home in Fullerton, California, and winning numerous awards.

In December 2014, Steve went over to Brian Stone and Leo Vargas of Showtime Paint in Gardena, California, to have them smooth out and paint the firewall. Three months later and the firewall refresh turned into a full-blown, frame-off build.

Steve decided to go full restomod with his Z28. He had the frame detailed, primed, and painted while the body was stripped down to bare metal. Hours of body line matching, filling, and sanding ensued until the car looked just like a perfect clay model. The side markers and door locks were filled in and smoothed and then House of Kolor Sunset Pearl Orange paint was generously applied. The front and rear bumpers were triple-coated and buffed by La Habra Plating in La Habra, California, to produce a show-quality chrome finish.

The modifications continued under the hood where the firewall was in fact smoothed like planned. The wiring was rerouted in custom-fabricated tubing to make it all disappear.

Although Steve took the Z28 quite far from its state as an all-original car, he did leave behind one important part of the car: the engine. He opted to keep the numbers-matching 350 small-block LT-1 but did freshen it up with Brodix aluminum heads and an Isky camshaft and hydraulic roller lifters. The engine draws in air via a 750-cfm Quick Fuel carburetor atop the stock LT-1 high-rise, dual-plane intake manifold that was ported and machined by L & R Engine in Santa Fe Springs, California. The MSD Pro-Billet distributor and plug wires are the only parts of the ignition system visible in the engine bay as the coil and MSD box are hidden in the cabin under the dash.

Expelling the exhaust is handled by Lemons long-tube headers feeding into a 3-inch custom stainless system with a crossover pipe. Before the roar of the LT-1 makes it out of the tailpipes, dual MagnaFlow mufflers quiet things down a bit.

Behind the small-block sits a TREMEC T-5 manual transmission with a Centerforce clutch in between. Power continues to the rear wheels through a 10-bolt rearend built by J & S Gear of Huntington Beach, California. Braking is taken care of by Wilwood 12.8-inch rotors all around with six-piston calipers in the front and four-piston calipers in the rear. Steve had CH Topping in Long Beach, California, install the Wilwood Hydraboost system to give power to the disc brakes.

When the engine and powertrain were all accounted for, Steve took the Camaro to Westech Performance in Mira Loma, California, for some dyno tuning. The end result was 400 horsepower to the wheels—a substantial increase over the LT-1’s stock output.

Underneath the Z28 is a heavily modified suspension from Hotchkis, which includes coil springs, shocks, and sway bar up front. In the rear, Steve kept the leaf spring system but upgraded to Hotchkis springs and shocks.

Inside the car is where Steve really takes this once-stock Camaro to the next level. He happened to know the concept interior designer for Tesla Motors, Juan (Lucas) Reyes, who was able to put together a custom yet cohesive interior. The whole dash was built out of fiberglass and reengineered to eliminate the glovebox. The single-piece dash was then covered in Bentley leather and double-stitched to match the rest of the interior. In the dash lives a clean set of gauges from Auto Meter. The center console was also hand-fabricated to conceal an electric parking brake, ridding the need for the foot parking brake and assembly. On either side of the center console are Scat Procar seats reshaped and covered in matching leather by Lucas.

At the end of it all, Steve is more than satisfied with the way the car turned out. We asked him if there was anything he would do differently, and his answer? “Not a thing.”

Camaro Resurrection: Bringing a Car Back to Life after Sitting for 20 Years.