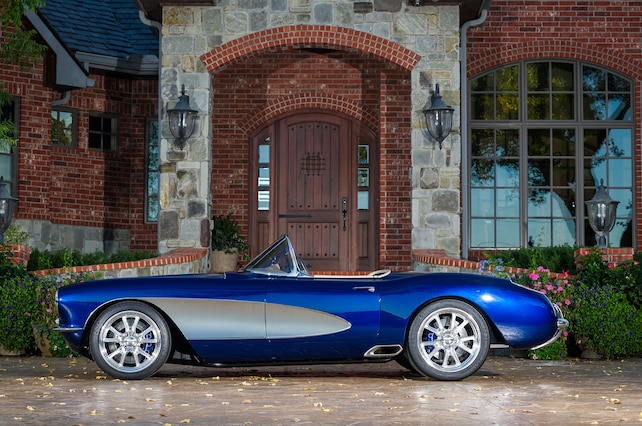 Sometimes here at Vette magazine we make a mistake that slips past watchful eyes, occasionally making its way to the website or, worse yet, onto the pages of our monthly print magazine. Calling this car a 1957 Corvette C6 is not one of those mistakes. If you run the VIN or ask anyone who knows a thing or two about Corvettes, you would find no opposition to the fact this is most certainly a 1957 Corvette. Peel back the body and that’s when you run into some identification issues. What’s underneath this blue ’57 is by no stretch of the imagination a 1957 Corvette, instead is the entire powertrain out of a C6 Z06 and a custom tubular chassis. So neither is it just a 1957 Corvette or a C6 Corvette because it’s a little bit of both.

This mad combination of a Corvette is owned by Mark Eaton of Wichita, Kansas, who bought the car as a torn-apart 1957 Corvette. It wasn’t just any Corvette though, it was the Vette that started his lasting attachment for these iconic American sports cars. Back in 1970, his lifelong church friend Monte purchased the car. Mark clearly remembers his first ride in the Corvette, “I was only 15 at the time and of course I had no money, but I told him that one day I wanted to own that car.”

Monte kept the Vette for another 10 years before selling it to Melvin, another friend from his church, who drove it for a couple of years and then began tearing it down with plans to completely restore it. From 1989 until 2014, the Corvette sat in pieces scattered around Melvin’s shed collecting dust.

Finally, 45 years after his first ride in the 1957 Corvette, Mark got a call from Melvin asking if he was ready to buy the from car him. Mark eagerly accepted the offer and began the process of getting the car up and running again.

Before settling on a direction for the build, he received word of a track-prepped 2006 Corvette Z06 that had crashed and was for sale. Mark decided to purchase the wrecked Z06 and pull out the entire drivetrain to use in his 1957 Vette. To make the LS7 and transaxle out of the Z06 work with the antiquated C1 body, he had SRIII Motorsports build a tubular chassis with accommodating modifications.

With most of the major puzzle pieces accounted for, he just needed someone to put them all together. For this, Mark went to Bauer Restoration in Wichita, Kansas. He handed over the project to Mark Bauer who, with the help of his team, would take the ’57 from a pile of parts to a dream-fulfilling restomod.

Come May 2015, and the car was ready to go. The final product was a top-notch show car with more than enough modern performance for Mark to enjoy.

The 427ci LS7 under the hood was upgraded from its stock 505 hp to 600 hp thanks to Katech Performance who added their Torquer LS7 110 camshaft that measures 0.615/0.648-inch lift and 220/244-degrees duration at 0.050. Katech also upgraded the stock valvesprings to handle the new, higher performing cam. The LS is cleaned up by a handformed aluminum engine cowl, which keeps the ignition system out of sight. The only engine bits left exposed are the dual stainless air intake pipes with blue cone filters on the end, the curved runners of the intake manifold and the chrome-topped radiator.

Corey Conyers of Bauer Restoration handled the fabrication of a custom exhaust that needed to weave around the highly customized body and drivetrain. Plenty of modifications were needed to get the HPC-coated Street & Performance shorty headers to fit. The rest of the exhaust is a custom 2 1/2-inch system exiting through dual VeraFlow mufflers that have an electric cutout for adjusting how much engine roar Mark wants to hear. Side note: this is probably the most useless modification according to Mark because he has yet to switch it out of its loudest setting. We don’t blame him.

Behind the LS7 isn’t the transmission, or at least not immediately behind it, because Mark wanted to keep the transaxle from the Z06. A prop shaft connects the rotating assembly of the engine all the way to the rear of the car where the transaxle, IRS and 3.42:1 rear gearing lives.

The chassis is what makes the mating of the 1957 Corvette body with the 2006 Corvette running gear work. “We gotta have something really ridged,” Mark recalled thinking when he started to lay out his plans for the build. The biggest problem with 600 horsepower in a C1 Vette is the fact that the convertible fiberglass body lacks substantial structural rigidity. Thus, Mark knew that he needed the chassis to be extremely ridged so that the fiberglass had no room to bend or crack. The solution? Well, as mentioned earlier, he went for a fully tubular chassis from SRIII that was customized to fit all the drivetrain goodies Mark wanted. On top of making engine and transaxle mounts, the rear cradle was narrowed to fit an ample amount of rubber and a larger, 22 gallon-gas tank was hand-fabricated to maximize time between stops at the gas station.

Attached to the SRIII tubular frame are coilovers from QA1 and custom front and rear antisway bars. Mark also had to decide on brakes before SRIII built the frame. What he chose were Baer six-piston disc brakes with 15-inch rotors front and 14-inch rotors in the rear.

It takes a big wheel to fit over 15-inch rotors so Mark had custom wheels built by Budnik measuring 18x9 up front and 19x12 in the rear. Some equally as impressive 245/40R18 and 345/30R19 Michelin Pilot Super Sport tires were then fitted to complement the wheels and give the Corvette exceptional grip on the road.

The attention to detail doesn’t stop there as the exterior is also littered with stunning details that can leave you staring for hours. The fiberglass body was widened 2 1/4 inches in the rear to swallow up those meaty 345-section tires while the side glass was completely removed and the channel closed up to give the convertible turned roadster a cleaner look. Speaking of roadster, Mark wanted a more swooping look for the front glass so he swapped out the stock window frame for one from a ’53 Vette, which has a little more pitch. Mark also had the trunk floor, interior floorboards, firewall and front and rear wheelwells hand-fabricated. Even the Corvette badges on the front and rear weren’t left alone—Mark had those embedded into the body instead of simply glued on. And the color? That is Le Mans Blue supplied by PPG and sprayed by Bauer Restoration’s Darren McCollom.

Step inside and the first thing you notice are the matching gauges sprawled across the dash, which were custom designed by Speedhut. The leather dashpanel ties together the rest of the interior’s three-tone leather done by Downey’s Upholstery in Wichita, Kansas. The hidden radio is controlled by remote with only the screen for the backup camera visible in the dash. Even without windows to roll up or a top to put up, Mark still wanted some form of heating and air conditioning so he had the guys at Bauer Restoration install a heating and A/C system from Vintage Air. A couple of final, modern touches to complete Mark’s experience in the driver’s seat include an electronic emergency brake and electronic Reverse lockout.

At the end of it all, Mark was more than happy with Bauer Restoration and the outcome of his lifelong dream car. Then in the winter of 2015, the proverbial icing was put on the cake—Mark took his Corvette to the Detroit Autorama and was presented the Past Forward Award from the Henry Ford Museum for the car’s preservation of past traditions combined with modern innovation.

For a car that Mark intended have built for himself to simply drive and enjoy, the Vette sure has overstepped all of his expectations, winning numerous Best of Show and Builders Choice awards across the country. But when you build something as beautiful and radical as a 1957 Corvette with a 2006 Z06 underneath, a little extra attention is to be expected.

Two C1s Corvettes and a C2 are discovered that had been stored for over 50 years in a barn, along with an unprocessed roll of film that shows the Mako Shark II.