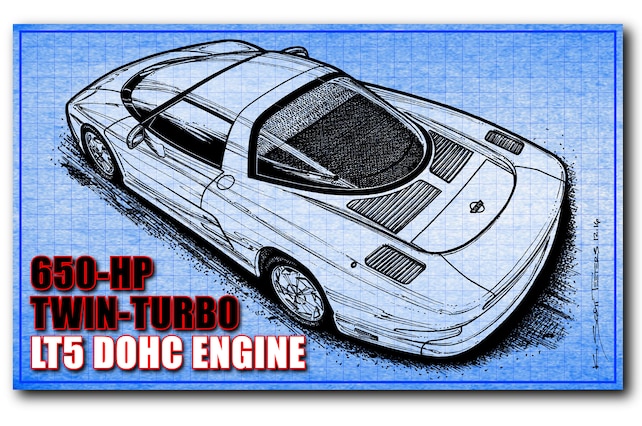 In the early 1980s Chevrolet was working on a twin-turbocharged 2.65-liter IndyCar engine. Though never seriously raced, it was a jewel, and “turbocharging” was the to-die-for setup for performance cars. Chuck Jordan, the new GM Design V.P., started his design career at GM in 1949. Jordan was there through the end of the Harley Earl and Bill Mitchell eras. When it was Jordan’s responsibility to explore the future of Corvettes, he went back to the Italian-like shapes of the Mitchell days. Under Chuck’s guidance, young designer Tom Peters created a rendering of what would become the “Indy Corvette,” named thusly because the car was to be powered by an IndyCar engine.

A fullsize clay model based on Peters’ rendering was built and sufficiently impressed management to approve the construction of two running versions. The 1987 running Indy concept was a more realistic version of the clay model. When completed, the running Corvette Indy, powered by a transverse-mounted early LT5 ZR-1 engine (similar to the 1970 XP-882) was put out on the show car circuit. After rave reviews, management approved the construction of a realistic version that could be manufactured.

The CERV III (Corporate Engineering Research Vehicle) was the most advanced Corvette engineering study to date. The CERV III was also the world’s first mid-engine car with full time four-wheel-drive and an automatic transmission. Chief of Chevy III Studio Jerry Palmer handled the styling while Dick Balsley was the lead engineer. Balsley designed the layout and packaging of the components and driver position. The 1973 XP-895, the “Reynolds Aluminum Corvette” was reviewed because it was a mid-engine transverse engine/chassis design. The oddest car pulled out for review was the “Push-Me, Pull-Me” Chevy Citation twin V-6 engine project to study the front/rear torque split design.

Starting with the running Indy body design, the nose was shortened and raised to meet bumper height requirements. The Indy’s curved side windows had to be flattened out so that they could roll down into the doors. Wheel openings were opened up to allow 3 1/2 inches of travel and the rocker panels were reshaped to accommodate side-mounted, 23.3-gallon fuel cells. And the overall height was increased a few inches.

The CERV III’s engine was just as exciting as the body. Since the LT5 was going to receive two Garrett T3 turbochargers with 12.0 psi of boost, stronger rods were installed and connected to Mahle pistons, and the compression was set at 8.5:1. The twin-turbocharged LT5 was dyno’d at 650 horsepower and the 655 lb-ft or torque. By comparison, the 1990 L98 Corvette engine only made 250 horsepower.

CERV III’s automatic transmission was a head-scratcher. First, a torque converter was mounted to the end of the LT5’s crank, then, using a multilink chain, connected to two three-speed Turbo-Hydromantic 425 transmissions, modified with beefier 475 Turbo-Hydromantic parts. A differential with bevel gears split to the front and rear, connecting a carbon-fiber driveshaft to front and rear Positraction differentials. The front Posi had more slip and 40 percent of the power under normal driving. Controlling this unique drivetrain was a computer attached to the front/rear differential that would adjust the transmission of power, front-to-rear, as needed based on computer-monitored front and rear tire slippage. The system delivered, as the 3,400-pound CERV III ran 0-60 in 3.9 seconds, had a calculated top speed of 225 mph, and recorded 1.1 g’s of lateral acceleration on the skidpad! This was with 1990 era tires. Imagine what the CERV III might do with a set of Michelin Pilot Sport Cup tires.

The classic Lotus “backbone-design” chassis was made of carbon fiber and weighed only 38 pounds. Under the body there was a system of ducting for incoming cool air and exiting of hot air. Under the hood was housed the engine coolant, power steering fluid and the air conditioning condenser. The CERV III’s “brain” lived there as well, controlling the active suspension, steering, throttle, front/rear torque-split and transmission. Also under the hood were yaw-rate gyros, suspension transducers, optical sensors and actuators; all working together to maximize traction. Imagine this system with the addition of modern downforce ground effects.

The brakes were similar to those used in late-’80s Formula 1 cars. There were two rotors per wheel. The fixed calipers gripped from inside each rotor and allowed the rotors to be much larger inside each wheel. The extra rotor created a sandwich effect with “pad-rotor-pad-rotor-pad” at each wheel. Rotors and pads were carbon fiber and made by AP Racing. No power-assist was needed. ABS braking and traction control was also part of the package.

Since the CERV III was to be cutting-edge all the way, Lotus constructed the underbody with carbon fiber and Kevlar, covered with a thin layer of fiberglass for a smooth finish. The overall structure was very rigid, separate from the chassis, and was attached to the chassis with four hydraulic mounts. The body could be lifted off the chassis, aided with quick-disconnect electrical and fluid connectors.

Behind the deep side ducts were coolers for the active suspension, turbocharger intercoolers and the dry-sump oil system. The rollbar was made from aluminum honeycomb material and carbon fiber. Take note of the shape of the CERV III’s nose. The deep front showed up on the C5 and became more pronounced on the C6. Also, the integrated rear spoiler/wing was applied to the Fourth-Gen 1993-’02 Camaro. The CERV III’s doors received Lambo-style upward hinges. The interior was well-finished but not seriously “designed.” Most notable are the two CRT screens in the center of the dash. The top screen was an ETAK navigation system and the bottom screen showed system analysis statistics. The firewall behind the driver is made of aluminum honeycomb material.

Once fired up, the active suspension pressurized and raised the car to its functioning ride height. Steering was described as having an unusually tight-arc and had automatic steering correction when hit with a side wind gust. The CERV III was constantly adjusting based on the road surface and condition. The “system” netted a driving experience of the CERV III being a totally predictable, doing exactly what it’s supposed to do, and could compensate if a component was not working properly. The ABS braking system kept the brakes at the edge of lockup. Under hard acceleration the computer adjusted the front/rear power delivery to prevent tire spinning.

The CERV III’s purpose was the exploration of what were then, extreme technologies. Advanced Engineering VP Don Runkle predicted that computer controls would one day deliver a much different driving experience and that automatic transmissions would ultimately be better than manual gearboxes. Today’s active suspensions are far simpler, but this was just a beginning. Project Engineer Richard L Balsley said, “The team’s goal was top performance in a car that was predictable and able to forgive driver error.”

GM’s bean counters determined that the CERV III would cost between $300,000 and $400,000. Obviously that was never going to happen. But here we are, 27 years later and one year away from an actual production mid-engine Corvette. The proportions might be close, but the body will be angular, faceted and crisp. It’ll be interesting to see how much of the spirit of the CERV III will be in the C8.

K. Scott Teeters has been a contributing artist and writer with Vette since 1976 when the magazine was titled Vette Quarterly. Scott’s Corvette art can be seen at www.illustratedcorvetteseries.com. His muscle car and nostalgia drag racing art can be found at www.precision-illustration.com.