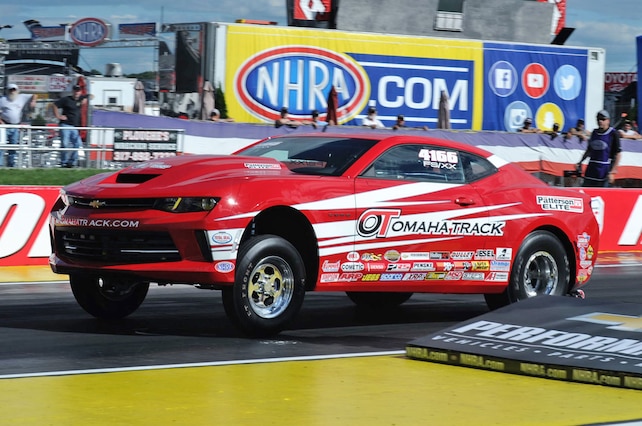 One of the all-time most-recognized and successful names within NHRA Sportsman drag racing is that of Kansas-based racer Todd Patterson. This prolific racer and engineer has been involved in a seriously long list of Chevrolet-bodied and Chevrolet-powered race cars during his career, which has spanned forward since he first began driving back in 1983. Throughout those many years his racing projects have remained not only highly successful but also on the cutting edge of innovations and breakthroughs in drag racing technology.

During the 2016 season, Todd’s latest and most recent project took to the track, continuing that trend. During the early summer of 2016, Todd debuted an amazing new COPO Camaro, running under the umbrella of the Omaha Track racing team owner, Terry Peterson. This COPO Stocker was number 2 of the 69 models released by Chevrolet in 2016.

“After we picked the car up, we initially ran it with one of the 350ci supercharged engine programs from Chevrolet and as an FSS/B,” Todd revealed. “But the long-term intention for this car when it was ordered was for racing it in the Factory Stock Showdown class. So with that in mind, we evolved to one of our own (Patterson-Elite Performance) engine programs. That is an NHRA blueprinted piece (also 350 ci and supercharged) and it’s our company’s first attempt ever for the Factory Showdown class. At Indy (during the NHRA Chevrolet Performance U.S. Nationals) we entered it as an FS/XX and made some good strides. We went to the class final round and ran 8.46 e.t. – our best run to date.”

For Patterson, who’s driving career has tallied 12 wins in NHRA national event circuit racing and 33 event wins and 7 championship titles at the NHRA divisional level (driving Chevy cars in Competition and Super Stock Eliminators), this COPO is his first venture into the Stock Eliminator racing pool.

“We were attracted to what NHRA is doing with the Factory Stock Showdown,” Todd continued. “2016 was our first attempt in the class so we were focused on just developing a feel for what it will take to do well and from there to make a plan on where we need to go. This class is already so tough we know it’s going to take some time and a lot of effort to develop what is needed to win in that class, but that’s the journey we are on now. Our goal is to be one of the fastest cars out there, period.”

Patterson, who is the general manager for the multicar, multidimensional, and industry-leading Patterson-Elite Performance racing team, also confirmed that this COPO will be based and maintained from their facility in Augusta, Kansas.

For 2017, the team plans to enter the COPO for all five of NHRA’s planned Factory Stock Showdown races and to chase that overall season championship title.

Patterson also hinted that there is a very good chance too that “a high-profile and well-known female” driver may be the new designated driver for the COPO project!

Todd has driven that machine for four seasons, winning frequently with it at both the national and divisional levels, and also resetting the NHRA national record for both e.t. and mph. That car is a 2010 Cobalt, which features a 400ci Chevrolet splayed-valve engine program.

While the success and the performance of this Cobalt is very well proven, Patterson’s desire to continue moving forward with new and innovative projects remains. He reported, too, that he and his team are now in the midst of an off-season evaluation and revealed the possibility that the Cobalt could be replaced next season by a new tube-chassis and clutch-less five-speed Chevrolet car.

Installing the Vortech V-3 Si supercharger on a 2016 Camaro