This 2010 Camaro SS is a Christmas gift that keeps on giving! 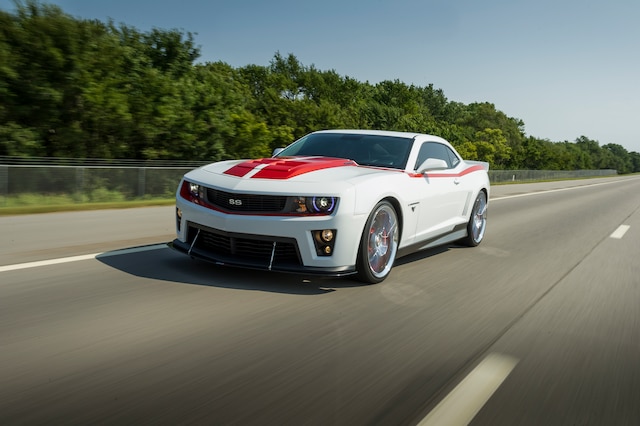 An infatuation with the Chevrolet Camaro has taken a lifetime to develop for Kansas residents Loren and Deidra Vanderheiden. The couple has owned five Camaros in total over the years, with this immaculate project the culmination of all they’ve learned while participating in the automotive hobby. “In 2009, we learned that Chevrolet was bringing back the Camaro with a flair for the older style, and we loved the style immediately,” says Deidra. “We are high school sweethearts. Loren had owned four Camaros previously (1969 RS, 1985 Z28, 1986 IROC Z28, and 1991 IROC Z28) and we dreamt of owning another one. We built the car online with various versions of our dream, and worked with Park Motors of Augusta, Kansas, to custom-order the car.”

Little did Deidra know that Loren had a couple of tricks up his sleeve during the purchase process. He initially told her that due to the production schedule, they wouldn’t receive the car until April 2010, when in reality he was working behind the scenes with the Park Motors team to ensure delivery by Christmas 2009. The car arrived at Park Motors on December 21, and Loren headed to the dealership with his father to pick it up. “I was out shopping and called Loren, checking in to see if he needed anything else bought for the family for Christmas. I asked him why he sounded as if he was answering on the toilet and Loren played along, stating that was where he was at, when in reality Loren and the salesman were in the car setting everything up to take the car home,” recalls Deidra.

With that bullet dodged, Loren managed to sneak the car to his parents’ house and hide it away in the garage for a few days, revealing its existence to Deidra on Christmas Eve, where she discovered the car topped with a monstrous Inferno Orange bow; ready for her enjoyment. And that’s really where this story begins.

The modifications began soon after. Once the weather broke in the spring of 2010, they ordered up a set of stock-style 22-inch chrome aftermarket wheels followed shortly thereafter by an SLP LoudMouth II exhaust system. For the next several years they continued brainstorming ideas, saving money, and enjoying the car before beginning the latest round of modifications. “Loren and I have always liked the white and orange combination,” says Deidra.

“Over time we were driven to be unique and create the design you see today. While creating the design, we were always brainstorming what new paint scheme would be unique, one-of-a-kind but not too over the top. Loren bought me a large banner of the Camaro and it hung up in my work office for months. For me, this is one of the most fun parts of creating a car; the beginning of a design.” They hatched a plan to go road racing with the Camaro—it’s been an ambition of Deidra’s for years. As she and Loren continued to plan for the future modification list, a direction began to take shape over the next two years.

It takes discipline to save your pennies to build a car out of pocket. Loren and Deidra put together a truckload of ’em, then took the plunge on a Street Brawler Package from Jannetty Racing Enterprises (JRE), which includes a 2.9-liter polished Whipple supercharger, Injector Dynamics ID850 fuel injectors, and a ZL1 fuel pump assembly and controller. JRE also supplied one of their LS3 camshaft upgrade packages, highlighted by a custom blower camshaft, a valvespring package, a rocker trunnion upgrade kit, a new oil pump, and all of the assorted hardware and gaskets required. The boxes were shipped to Bob Musgrave—owner/operator of RPM Motorsports—for installation through a collaborative effort between Musgrave and Kestyn Frederickson.

The Camaro, by this time aptly nicknamed Beastie, was then strapped down to the RPM Motorsports dyno, and a remote tune was performed by Ted Jannetty and installed by David Polk through an SCT X4 handheld tuner. The pair corroborated to create the custom-built tune. “Beastie lives up to its name with the sound of the new JRE LS3 Street blower cam package. Loren enjoyed being a part of the tune while Beastie was on the dyno and knowing the tuner most certainly helped. David perfected the tune to make 691 rear-wheel horsepower and 617 lb-ft of torque at 7,000 rpm,” says Deidra.

To support this power level, RPM Motorsports and Frank’s Automotive assembled the balanced and blueprinted LS3 with many stock parts, which have been proven over the years to stand up to this sort of abuse. LS7 roller lifters, 3/8-inch Trend chromoly pushrods, a high-performance Melling oil pump, a ZL1 water pump, and the aforementioned Jannetty-spec camshaft are the only major changes from the OEM components. The engine is topped with a set of Billet Custom Products valve covers to complete its stunning appearance. The rest of the engine chrome pieces are from American Car Craft, and an RX oil catch can designed specifically for use with the Whipple supercharger is onboard.

With a nod to its road-racing future, a ZL1 oil cooler has been installed behind the front bumper, a SPEC clutch is sandwiched between the engine and six-speed transmission, and a Hurst short-throw shifter protrudes from the center console. The stock rearend has been beefed up by Frank’s Automotive with a Richmond 3.73:1 ring-and-pinion. But the car isn’t all show. A set of ceramic-coated 1 7/8-inch Kooks headers help to get the exhaust out of the engine, and lead to a stainless-steel exhaust system.

An interesting story Deidra shared with us about the exhaust system installation: “Loren’s first drive of the new-and-improved Beastie was from RPM Motorsports to Kevin Kaiser’s American Muffler with no hood, no front end looking similar to Mad Max; all he needed was the dog with the goggles. He called me so excited because he laid approximately 16 feet of rubber going from First to Second gear,” she says.

To harness the elevated power level, the suspension has been beefed up substantially. Hotchkis A-arms and 1 1/8-inch powdercoated sway bar are in place at the front of the car, with a Hotchkis rear sway bar and Hotchkis 1-inch drop springs at all four corners. The car was ordered from the factory with the Brembo brake system. A full complement of BMR Suspension products help to keep the rear of the car in line. The company’s rear trailing arms, spherical bushings, rear lower control arms, and adjustable rear toe rods complete the suspension modifications. They didn’t forget the interior, either. Loren installed a complete 2013 MyLink conversion, which drives a JL Audio HD Series 600/4 amplifier through JL Audio three-way component speakers front and rear, along with a JL Audio 10W7 subwoofer.

Beastie is finished off with an eye-catching Arctic White/Inferno Orange scheme applied by Jeremy Edwards at Norris Collision Center. The Vanderheidens are proud to hop inside and drive this car like it was meant to be driven. It’s won several Best in Show awards, but most importantly, has had the honor of raising money for Children’s Miracle Network and Toys for Tots. It’s the Christmas present that keeps on giving.