Vicarious: Bryce Bidinost digs the speed and acceleration of his fourth-gen F-body, but the family patriarch fuels the fire 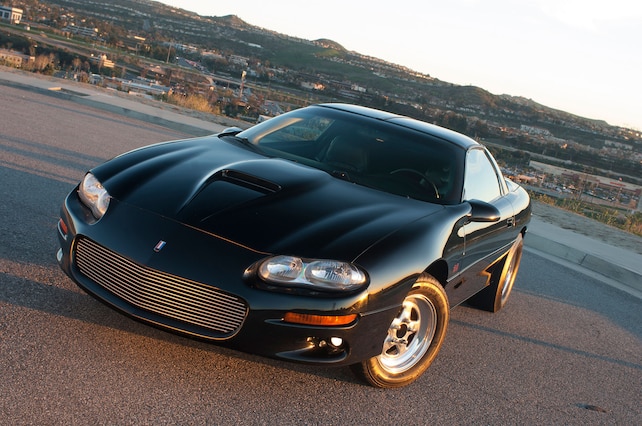 Generally speaking, influence plays a large part in the path one takes down the proverbial web of open roads. Most of the time it’s subliminal, and on the off-hand chance you recognize it, you gotta use it to your advantage. That’s what Bryce Bidinost did when he found out his father, Ron, was an F-body enthusiast during in his early 20s.

And it should come as no surprise since muscle cars and high school went hand in hand to a kid growing up in the 70s. But to Ron’s father, performance took a back seat to practical transportation at the elder Bidinost’s home. Apparently, Gramps didn’t share the same muscle car fever that ran rampant through Ron’s blood. This all worked out in Bryce’s favor as his pops still had a lingering taste for fast cars and the opportunity to create a wrench-turning bond with his son that never transpired with his own dad.

Not that Ron force-fed his young son the F-body bottle, but breaking out old photos of his ’74 RS and ’86 Z28 certainly instilled a memory that Bryce would later feed off in his late teens.

After short affairs with various breeds of GM cars and trucks throughout his high school years, memories of those classic Camaro photos his dad had showed him a few years earlier became prominent stills in his head that only fueled his desire to become part of the Camaro world. Knowing a first- or second-gen was out of his price range, finding a fourth-gen Camaro would be more fitting to his budget. Hoping to fund an 11-second daily driver, fuel injection was also attractive as horsepower per mile would be a softer hit on his wallet.

Bryce started looking at LT1 power, but found most of the early to mid-’90’s cars on the market were facing upwards of 100k on the odometer. Not easily discouraged, Bryce came upon a 2000 Camaro with less than 50k on the meter and nitrous hidden in back. It was the ultimate ride for the then 18-year old hot rodder. $18,000 later, and a very long conversation with his parents concerning the negatives of street racing (Mom and Dad did most of the talking) netted him a score on the “slightly” modified fourth-gen. Knowing Bryce would continue upgrading the car in the drag race motif, Ron was happy in knowing he’d have the opportunity to help wrench on a car and in turn grow the mechanical family bond.

With the car running well, they were hitting the local ’strip getting it dialed in while having some good father and son drag time. Unfortunately, or fortunately, depending on how you look at it, the two Bidinosts would be spending a lot more time working on the duo’s hot rod than they originally thought. One night at Irwindale Raceway’s 1/8-mile dragstrip, Bryce staged the car as normal, the light went green, and all hell broke loose. At about 60 feet into the run a nitrous backfire turned the modified LS mill into worthless scrap metal. Last we checked, nitrous-induced engine failures aren’t covered under warranty, so the two started from scratch on putting together a new engine, only this time an LS6 block would be the point of origin for the solid powerplant.

This would be a substantial upgrade from the last engine, starting with an Eagle 4.000-inch 4340 forged crank and K1 Technologies 6.125-inch Billet H-beam rod set. With a supercharger planned down the road, Bryce went with custom Diamond Racing dished pistons designed to handle big amounts of boost. MMS Stage III heads provide ample flow while a Comp Cams grind of 224/224-degree duration at 0.050 and a 114 LSA provides plenty of meat for the ’strip, at the same time keeping driveability in check. Engine assembly was in good hands as Bryce entrusted it to the experienced hands of Tim Lee at Don Lee Auto in Rancho Cucamonga, California. A BBK SSI aluminum intake manifold and 85mm throttle body work in conjunction with the SLP air filter and MAF. A Holley inline 255 fuel pump ensures Bryce gets his money’s worth of the Nitrous Express 150 wet-shot system. With the car breathing easy, the greenhouse escapes effortlessly through a set of Hooker Super Comp long-tubes tailed off with SLP’s Loudmouth exhaust.

Conscious of the flimsy fourth-gen construction, Bryce armed the chassis with a host of BMR artillery, including strut towers, subframe connectors, sway bars, Panhard rod, torque arm, trans crossmember, and driveshaft safety loop. Again, streetability came into play so a Six Speeds Inc. T-56 Stage 4 trans more than handles the fiery grunt that twists its way down the Spohn aluminum driveshaft. An Eaton Posi unit ensures the Moser 12-bolt and 4.11 cogs get Bryce promptly off the line when the Spec Stage 3+ clutch is maliciously engaged.

With plenty of “go power,” this sinister fourth-gen travels the quarter-mile in about 11.50 seconds, so Baer cross-drilled rotors squeezed by Hawk pads were the choice to bring the beast to a stop. Although he changes up the wheel and tire combination for street and ’strip applications, or his mood for that matter, most of the time Bryce runs Weld Pro Stars on all four corners, 15x4s up front wrapped in 165R15 radials, and the 15x8 rears are covered in Mickey Thompson 28x11.50 LT ET Streets for days at the ’strip.

Except for the A-pillar–mounted Auto Meter gauges (fuel pressure, nitrous pressure, wideband air/fuel) the interior is basically stock. On the occasion that Bryce feels the need to douse the sweet sound of the LS chamber music, the stock system gets a boost from a Monsoon/JL Audio 250-watt amp and a pair of 10-inch subs of the same brand.

As most muscle cars go—race or show—there are usually a host of upgrades the owner has in store for down the road. First on Bryce’s list is a ProCharger F-1 supercharger. “I built this engine with the idea of adding a supercharger, so that will be the next piece to be added,” Bryce informs. “After that, an eight-point rollcage, Corbeau race seats, and a VFN 3-inch hood will take part in the mix.”

Thanks to Bryce’s dad, his brother Tyler, and a host of friends including Oscar Arcada, this car has become a dream come true for this young hot rodder. With the ultimate goal set to make this an 800hp street-legal ride it looks like Bryce and his dad are going to have plenty of bonding time on their hands. And that’s just fine. After all, working on cars with his son is all Ron Bidinost could ask for.

As for Bryce, he’ll be happy when he can drive this car to the ’strip, bust out a low 10-second run, and head back home without breaking a sweat.

They never made a fourth-gen Camaro in this color, but looking at it on Brian Wilhelm’s SLP-built ’00 SS really makes you wonder why not.

Keith Fidura built himself an overpowered 2000 Camaro SS to give himself a challenge. Check out his Death Sled here, in the January 2013 issue of GM High-Tech Performance Magazine.