This 1969 Camaro is designed to handle like it’s on rails! 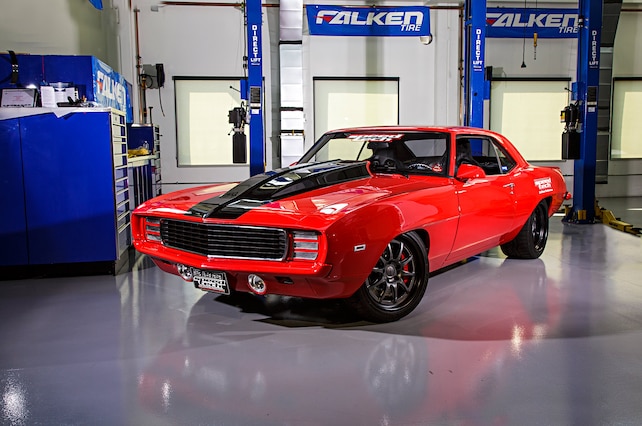 The development process to build a high-quality aftermarket suspension system isn’t as simple as picking out a set of shocks, building control arms, and slapping it all together and hoping for the best. The technique, in the case of Speedtech Performance’s ExtReme subframe system, is one of precise planning, careful parts design and selection, and methodical execution.

In this particular instance, the 1969 Camaro is owned by company vice president Roger Maniscalco and is set up to be not only a stellar performer on the track but also as a driver. Not a driver in the sense that he takes it to the local cruise-in once a week; nay, this Camaro has made the 860-mile round trip to the Scottsdale Goodguys show without a single hiccup—even driving home in the pouring rain! The car has been through a number of configurations, as it’s been in Roger’s possession since he purchased it at the tender age of 16, back in 1985. This made it a perfect candidate for the 2016 Falken Tire Super Chevy Muscle Car Challenge.

“I bought the car for $2,400. The car, at the time, was light green inside with a fold-down rear seat option, Forest Green on the outside, had rusty 14-inch Cragar SS wheels, a 350/350 trans with column shift, and a 10-bolt rearend,” says Maniscalco. Maniscalco—a Canuck by birth, and in his early adult years a corporate manager by trade—worked like a maniac during his personal time, partnering with Blake Foster as the pair cranked out custom cars in their hometown of Vancouver, British Columbia, Canada. They were purchasing products from Speedtech’s original owner, and to make a long story short, the pair struck a deal to take over the company, expanded its product line far beyond the original catalog’s 1967-’69 Camaro parts, moved it to St. George, Utah, then added service manager—and Aussie transplant—Jay Weir to the partnership. Today, their catalog fills the Pro Touring world with products to fit everything from the aforementioned first-gen Camaro to the 1994-’96 Impala SS and even the 1967-’72 C10 truck platform.

The company’s all-new ExtReme front subframe system is installed on this car, and it’s not only a complete redesign of the front suspension’s pickup points and configuration, it’s also a collaboration with road racer and NASCAR engineer Ron Sutton of Ron Sutton Race Technology. Sutton and the Speedtech team worked together to develop suspension geometry to perform on the track while remaining streetable. In fact, Maniscalco raves about the fact that the framerails have been designed to allow the fitment of a monster 315-wide front tire on an 18x11 wheel without any outer fender modifications—while retaining a full turning radius.

Although easily capable of it, as Maniscalco uses this car quite regularly, the Camaro is not an all-out track machine.

“This is my personal car, so it has creature comforts like air conditioning, comfy leather seats, and a sound system. This was not intended to ever be a gutted race car, and the parts underneath are off-the-shelf parts that any customer can order directly from us. It’s a 3,500-pound car that’s the epitome of a Pro Touring car,” he says.

The Camaro’s subframe design is customizable, and the company can outfit it to the customer’s needs.

“What we decided to do is see if we could come up with a suspension system by doing what nobody else has done—start with the geometry first and then make the parts to fit it. We changed the forging of our spindle to work properly with the geometry we selected, where most companies start with a Mustang II or Corvette spindle design. It’s kind of a revolutionary way of doing things; we were able to do it since we manufacture our own spindles. Because of this we were also able to design the upper control arms to run 7-9 degrees of caster for better handling. And most of the time with these cars you have to do fender modifications to run a tire larger than 275 mm, but we designed it all so it goes inboard and that problem doesn’t exist,” says Maniscalco.

There is a massive list of upgrades and accessories designed to help you outfit your car with the ExtReme subframe system, which includes solid body mounts; stainless steel, custom-fit headers; custom fiberglass-widened inner fenderwells; and frame connectors designed to work specifically with the company’s torque arm rear suspension, which is also on this car. The basic front suspension package will set you back $7,199, and each of the extra and custom options ding the bill appropriately.

The rear torque arm suspension is designed to provide the best of all worlds in terms of performance. Maniscalco says it sticks to the road like glue yet allows for a comfortable ride. The car has been mini-tubbed to fit the 315-wide rear tires, and the torque arm system can be configured for stock tubs or mini-tubs depending upon customer requirements.

As reliability on road and on track is paramount for Roger’s personal car, the decision was made to simplify the drivetrain combination. To that end, a box-stock crate 525-horsepower LS3 and T-56 six-speed transmission are right at home in the confines of the Camaro’s engine bay. A Rick’s fuel tank and PRC radiator complete the package. It starts when it’s supposed to, stops when it’s supposed to, and turns when it’s supposed to, with no muss, no fuss, and a bad-to-the-bone suspension system connecting it to the road.