Fine Tuning: How a veteran racer set up a C5’s suspension for strip action 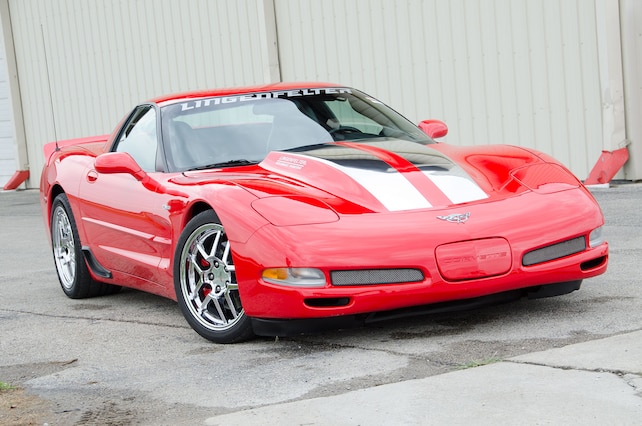 One man’s meat is another’s poison. Especially when it comes to tuning the engine and chassis for the ’strip. What works on one type of track might not work well on another. And either configuration might not work very well at all on public roads. What follows is an experienced race car builder’s account of how he tweaked a Torch Red 2003 Z06 for better hookup on the ’strip, dramatically different from the car’s performance on the street.

First, a bit of background on his race car creds. M.J. Redden, aka Junior, worked for some performance legends over the years, namely Don Yenko and Zora Arkus-Duntov. Junior cut his competition teeth in Stock cars in the late ’50s, running a 1957 Chevy. He went on to win 11 straight feature events at the Clinton Speedway, and took home both the Championship and Rookie of the Year trophies.

By necessity, Junior developed a talent for welding and fabrication as a young man. Yenko took notice of the teenager’s abilities and worked out a deal with him. Turns out that Duntov was seeking out Yenko to upgrade suspension pieces. So he got Junior to trade parts in exchange for him cutting and rewelding Duntov’s components for racing duty.

Over the years, he worked firsthand on all sorts of chassis setups, especially Corvettes (including a customized screaming-yellow 1975 Stingray built for his wife, Sandy, which won numerous trophies and was featured in a previous issue of Vette).

When Junior acquired the 2003 Z06 shown here from a car collector, it was configured for rallying and autocrossing and was having some traction issues. He had plans for some serious ’strip action, considering that the engine is a Lingenfelter-prepped LS6, fitted with a Magnuson supercharger pumping 12 psi of boost. A Lingenfelter hood with chrome stripes provides a provocative indication of what’s underneath. The engine also runs a custom COMP cam and Kooks ceramic-coated headers. With that setup, it delivers nearly 700 horses.

Sounds great in theory, but the engine was going faster than the car due to the factory clutch slipping, so it was replaced with a Monster Clutch Level 3 clutch. Also, it was determined that the trans was going south so a 2007 C6 six-speed manual was installed.

Even with these drivetrain upgrades, the car was still a handful to drive, as it would break loose the Mickey Thompson street/race tires easily on the street, and it needed some precise adjustments for a better launch. His initial approach was to adjust the settings on the QA1 performance shocks for more weight transfer on the launch, making them stiffer up front and softer in rear. Since they have two knobs with eight settings each, he started at the front by clicking to No. 4 on the compression and No. 8 on the rebound. At the rear, he went with No. 2 and No. 6, respectively.

Turns out that his static estimates were pretty close, but not exactly right. After watching the nose closely during a launch at a test-and-tune, he wanted to see the front tires float a bit more for the first 100 feet, and then see the car settle down, so he had to dial in the settings just a tad. He reset the front rebound to No. 7, and since the rear was banging on the stops, which loaded up the chassis and made for a hard ride, he bumped up the rear compression setting to a more resilient No. 3, and it now grabbed way better.

Still more work was needed, however. It turns out the camber angle on the tires was ideal for carving apexes but too negative for straight-line runs, as only about half the contact patch showed up on a burnout, even with the tires aired down to 18 psi. On the street/race tires, the car could run for an eighth-mile just smoking all way. So new Goodyear slicks replaced the street tires (with the rears measuring 295/35) and the alignment reset for a full contact patch.

With all these changes, on the launch the left front tire would show just a bit of air off the line, and then the car would settle back down for the sweet spot in the mid-range of the powerband. Somewhere, Don Yenko is smiling down on Junior for a job well done.