Detroit Speed’s Test Mule 1972 C3 Corvette is All That

Inside Out: DSE’s test mule elevates C3 Corvette handling to world-class levels thanks to a ground-up suspension overhaul 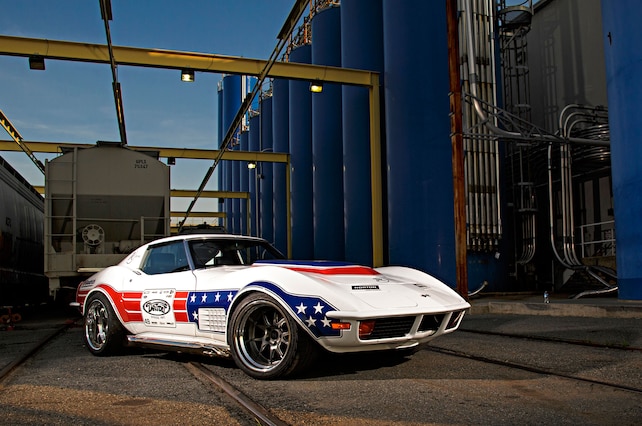 Sometimes the things that don’t stand out are far more revealing than the things that do. You might think that the 590hp LS3, epic 335mm-wide rear meats and deliciously retro livery on Kyle Tucker’s 1972 Corvette tell plenty about the car’s go-fast intentions, but they don’t. Any poser can copy and follow this exact same formula and pretend like they’re the real deal. If you really want to know what this car’s all about, check out those -AN fittings. As ridiculous as that sounds, the logic behind it is so backward that it might actually make sense.

Monkeying around with worm clamps, NPT fittings, and thread sealant simply isn’t an option during the heat of battle, so everything from the fuel rails and the radiator hoses to the coolant overflow tank and the brake and oil lines on this C3 prioritize easy serviceability and leak-free seals. What’s even more revealing than the fittings themselves are the components they’re connected to, like the dry-sump oil system and tandem master cylinders. It takes a real racer to know that many a wet-sump engine has puked oil out the breathers on the autocross, and a quaint proportioning valve doesn’t always offer the flexibility in front-to-rear bias that late braking maneuvers demand.

Granted that the -AN fittings themselves don’t define Kyle’s Corvette, they represent a full bevy of hardware lurking just beneath the surface that broadcast this car’s true objective of kicking some serious heinie on the autocross. As the owner of one of the top suspension manufacturers in the business—Detroit Speed Inc.—that objective extends beyond this one particular C3 to the entire C3 platform at large. To catapult the redheaded stepchild of the Corvette lineage (i.e., C3) into the upper echelon of Pro Touring performance, Kyle Tucker and the DSE crew invested countless hours developing an all-new line of suspension components on its in-house test mule. It just happens to be Kyle’s personal car.

Nevertheless, personal car or not, it doesn’t change the fact that it offered Kyle a great excuse to build a car he’s always wanted anyway. While midyear elitists love taking cheap shots at the Corvette generation that endured the brunt of the ’70s oil crisis, the C3 Corvette’s prolific road racing achievements made quite an impression on the youth of the era. As such, when planning out the build, Kyle wanted to pay tribute to the wildly successful C3 endurance racers that routinely showed up the Europeans on the world’s largest stage. “My favorite C3 road race Corvette was the John Greenwood big-block-powered car that competed at Le Mans on BFGoodrich street tires. I also love the Greenwood design livery,” says Kyle.

Although the DSE C3 may bear a passing resemblance to the fabled Greenwood machine, that’s where the similarities end. Beneath the reworked fiberglass, the DSE machine is an entirely different animal. “We purchased and built this car as a development vehicle for our new C2 and C3 suspension products. Every new product line we introduce is first installed on one of our own cars,” Kyle explains. With plans to run super sticky and super fat (315s in the front!) BFGoodrich Rival S tires, DSE had to seriously beef up the Vette’s chassis and suspension to endure prodigious cornering loads. Consequently, DSE designed beefier control arms up front and replaced the factory leaf springs with coilovers at each corner. DSE drop spindles at the front and back enhance the stance while also optimizing suspension geometry.

The real magic, however, happens in the back where DSE utilized its engineering acumen to completely redesign the primitive factory independent rear suspension setup. While the stock C3 IRS was plenty capable for its day, modern levels of grip can make it go kaput in a hurry. The problem stems from its fundamentally archaic layout where the halfshafts also serve as the upper control arms. In order to replace the failure-prone universal joints with more flexible CV joints, DSE added links to support the top of the spindles, thus eliminating lateral load from the drive axles.

Adding some links here and there isn’t exactly a bolt-in affair, and required completely revamping the entire IRS assembly. “I think the rear suspension is the most unique part of this car. Our new Corvette product line features a rear cradle system made from cast-aluminum sections, and DSE’s own forged-aluminum rear uprights. This converts the rear suspension to a multilink system that uses CV joints instead of the prone-to-break U-joints,” Kyle Tucker explains. “The all-new front and rear suspension geometry is very adjustable and works very well with the stock frame. We also designed and developed our own unique front power rack-and-pinion steering system to complement the suspension upgrades.”

Of course, handling alone doesn’t win races, so DSE contacted Mast Motorsports and ordered up one of their proven LS3 small-block combinations. Stroked to 416 cubic inches, the combo puts out a respectable 590 hp through a NASCAR-inspired Hightower four-speed manual trans. Brembo six-piston clamps are tasked with bringing the fiberglass missile to a halt. Speaking of fiberglass, packaging such massive rollers beneath the Vette’s skin required a fair amount of cosmetic surgery. “It seems like no two Corvette fender flares are the same from car to car. Once we installed our suspension and Forgeline wheels, we began crafting a new set of custom flares,” Kyle recounts. “Michael Neighbors in our body shop started with a set of L88 flares and decided that we would keep very little of the original flares to get the look we wanted. In an effort to keep weight to a minimum we also installed fiberglass front and rear bumpers. We finished everything off with an LT-1 hood.”

As you’d expect from a purpose-built competition machine, the DSE Vette performed quite well in its autocross debut. “After finishing the car just hours before its first run through the autocross, it won its class at the 2016 Raleigh, North Carolina, Goodguys event,” Kyle recalls. Despite that initial success, the DSE team isn’t sitting back and gloating over its achievements. “We learn every weekend the car goes out and competes, and we try to keep it going every week so we can log more time on the parts and gather all the information we can. The car has undergone several continuous improvements as we get closer to officially launching our Corvette production parts.”

Sounds pretty hard core, but what else would you expect from a crew that can’t be bothered with worm clamps, NPT fittings, and thread sealant.