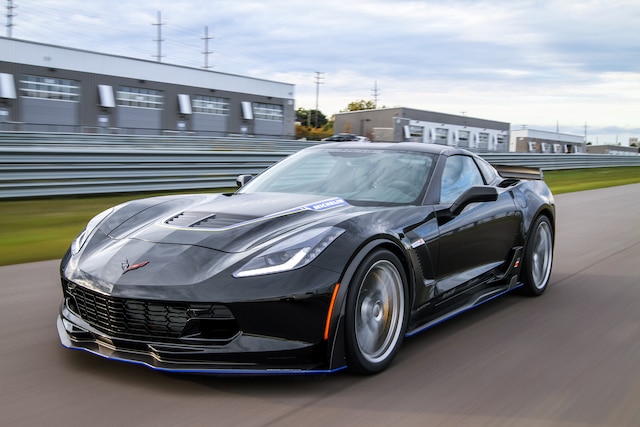 Auto writers hear it all the time: “You must have the best job in the world.”

It’s easy to believe it, but as with any occupation there are highs and lows. For every pit pass to an IMSA race or invitation to judge a concours event, there are countless hours of follow-up at the keyboard. The deadlines are never-ending and someone is always asking when the copy and photos will be ready. Always!

Then again, and it doesn’t happen every day, we are privileged with experiences that make the ride on the perpetual deadline machine worth the fare. That came recently when we had a private road course all to ourselves and Nowicki Autosport and Design’s ConceptZ Z06 at our disposal. Yes, there are worse ways to earn a living.

The road course was the 1.5-mile track at the center of M1 Concourse, the new, 87-acre automotive playground along Woodward Avenue in suburban Detroit. Ringed by “car condos” where enthusiasts can store their vehicles and then exercise them on track, it’s a facility and community quite unlike anything else. The track isn’t wide enough to really accommodate multicar racing events, but that’s not what it was designed for.

It was designed to enable individuals to push their cars to their limits off the street, and in that regard it’s a dream track. It has a couple of fast straights, some tight turns and a couple of subtle elevation changes to keep you on your toes. It was the perfect venue to run Nowicki Autosport’s Z06 through its paces.

Jeff Nowicki built the ConceptZ Z06 as an homage to longtime racing partner Michelin. It’s a relationship dating back more than 20 years, as Nowicki cut his teeth road racing Corvettes in a variety of series. He holds four SCCA divisional autocross championships, two SCCA road-racing championships, and has participated in everything from the World Challenge and IMSA to the Grand-Am Rolex series; rolling almost exclusively on Michelin rubber, or the company’s BFGoodrich brand.

“It has been a great relationship that has stood the test of time,” says Nowicki. “More than a sponsorship, it’s been a partnership with mutual support for different endeavors over the years and building this car was a great way to acknowledge it.”

The impetus for building the Michelin-themed Z06 came after Nowicki built a Mobil1-inspired ’14 Stingray that racked up two big awards at the 2014 SEMA Show. Mobil1 was so impressed with the car that they commissioned Nowicki Autosport to build another as a sweepstakes grand prize, which they awarded to the lucky winner at the National Corvette Museum in 2015.

That Stingray introduced Nowicki Autosport’s Concept7 range of carbon-fiber appearance and aero components for the C7, and building a Z06 for the Michelin project enabled the company to model a similar assortment of ConceptZ parts for Chevy’s supercharged supercar slayer. But first, Nowicki had to track down a Z06; and he wanted one with the hard-core Z07 package. For that he called on Purifoy Chevrolet, the Fort Lupton, Colorado, dealer that has long been a coconspirator in building higher-performing Corvettes. Dealer Rollie Purifoy submitted the order for the Z06 and arranged for its delivery in Detroit, while also providing his two cents on what he believed were the most important features to focus on for the new components.

Some of them were no-brainers, including carbon-fiber versions of production parts such as the rear quarter-panel cooling ducts, front fender vents, rear diffuser panel, rear brake ducts and hood vent. To that, Nowicki made uniquely designed carbon-fiber rocker panels, fender flares and rear spoiler. A couple of the parts developed on the Stingray also worked, including the A-pillar covers, targa bar and taillamp bezels. Most parts carry over to the Grand Sport model, too, but Nowicki is working on a few exclusive parts for that model, as well.

The rear spoiler, offered with and without an adjustable wicker, and the unique rockers’ distinctive vertical “shark tooth” feature at the rear is designed to keep air attached to them to enhance downforce. The other components simply add a richer, more performance-oriented style to the car, reinforcing its all-business aura. They’ve got a unique finish achieved with a BASF RM matte clear. It’s a blend that looks more exotic and, frankly, more expensive than the conventional glossy carbon-fiber finish.

“It gives the ConceptZ a unique, elevated accent befitting of a car with its serious capability,” said Nowicki. “And with the rear spoiler and rockers, there’s function that complements the track-inspired form.”

Complementing the carbon enhancements is a set of Forgeline GT1 wheels wrapped, of course, in the Z07 package’s Michelin Pilot Super Sport Cup tires. The Michelin tribute carries further onto the carbon-fiber hood, which features the brand’s colors and brand graphics flanking the hood center and a subtle yet clever relief of Michelin’s famous Bibendum mascot, also known as the Michelin Man, in the center of the hood. Overall it’s a tasteful nod to the brand that doesn’t detract from the visual impact of the carbon accessories and the Z06’s own track-ready stance.

For the moment, the supercharged LT4 engine remains stock. But with 650 horsepower and 650 lb-ft of torque on tap, that’s more than enough to explore the car’s, and the driver’s, limits on the track. Nowicki Autosport offers stroker and head-and-cam packages for the Stingray and Grand Sport’s LT1 engine, and we’re told LT4 enhancements are in the works.

To be honest, our limits came up much quicker than the car’s on the M1 course. The straights were long enough to only barely probe the LT4’s high-rpm breathing capability, while a set of new, adjustable stabilizer bars codeveloped with Hotchkis eliminated any hint of lean in the corners.

And speaking of the corners, the Z07 package’s Brembo-supplied carbon-ceramic brakes brushed off our faint attempts at hard braking as we approached them as if we’d tapped them lightly on the shoulder and asked, “Would you mind terribly reducing the car’s velocity a skosh?”

“Dynamically, the Z06 is such a well-sorted car that it’s difficult to significantly raise its performance threshold,” says Nowicki. “We’ve simply augmented what we could without intruding on the car’s inherent capability. It’s a hell of a ride.”

Just in case you’ve forgotten, the standard Z06 package includes Magnetic Ride Control and Performance Traction Management in addition to the LT4 engine. It also incorporates coolers for nearly every drivetrain component, along with generous ducts that funnel air to them. Opting for the Z07 package, like Nowicki’s car, adds adjustable front and rear aero components; 19-inch front wheels and 20-inch rears; Michelin Pilot Super Sport Cup tires that are just this side of road-legal; the Brembo carbon brake package, with positively enormous 15.5-inch-diameter front rotors and 15.3-inch rears, for the ultimate in factory-delivered track capability.

It all adds up to an American-built supercar that can sprint to 60 mph in under 3 seconds, blow through the quarter-mile in under than 11 seconds and hug a corner with 1.2 g’s worth of very tenacious grip. Stuff it Stuttgart.

Lap after lap at M1, the car never felt anything but controllable and composed, with tremendous grip enabled by those seriously sticky Michelin Super Sport Cup tires. Once they’re warm, it’s as if the line around course was prepped with duct tape, sticky side up. Harnessing 650 horses with anything else would have been an exercise in tachometer-zinging tire spin.

The Z06 also delivers its performance with a welcome level of passenger luxury and technology, not the least of which is the competition seats that offer a pass-through for harness belts. There’s genuine carbon-fiber trim on them, too. Nowicki’s car is unaltered inside, so the carbon, aluminum, leather and suede elements that look custom-trimmed are all strictly from the line in Bowling Green. And the 8-inch high-def infotainment screen might look a little small in a Traverse, but within the close confines of the Corvette, it’s large, bright and easy to access, including the video of our M1 laps recorded with the Performance Data Recorder.

So, yes, we spent the better part of day turning laps in a bespoke Z06 on a track we had all to ourselves. Whether that makes it the best job in the world is debatable.

But it’s definitely in the running. Top five, at least.