The Piano Juggler: Put the squeeze on me baby! 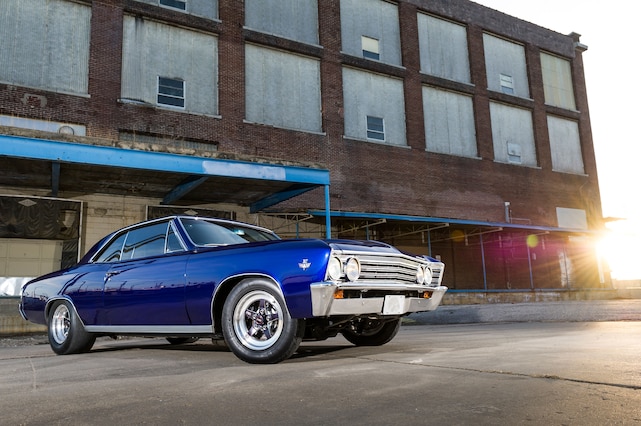 This car entered the Johnson family collection in 2002. While he was away at college, TJ Johnson’s dad and brother bought it in Defiance, Iowa, for $700. They got it from a woman named Dixie Shanahan, a woman with an abusive spouse. Eventually, she killed him and then went about selling off all his cars. The episode was chronicled in a true crime novel called Dixie’s Last Stand. Suffice that TJ’s dad was called to testify at the murder trial. “My in-laws lovingly refer to the Malibu as the Dead Man’s Car, but that’s only one of its few nicknames,” quipped TJ.

To be sure, there have been literally dozens of Chevrolets, from pre-War old to current, entertained by the Johnson family, but this car TJ can’t quit and has clung to him with the tenacity of a vestigial remain. “In the time I’ve owned it, it’s had four iterations, more or less, each defined by what engine was in it,” TJ cracked.

“I often get told that it’s deceptively quick. I don’t necessarily think the car’s a sleeper. It’s visible. It has a rollbar, slicks and skinnies, and the license plate says NOS. But the interior and rollbar are very tidy. The nitrous bits underhood are tastefully out of sight and the exhaust note is pretty tame. It feels good to catch people off guard and hear the things they say once they understand what it’s all about.”

Since we have neither the space nor the inclination to detail the entire history, let’s just step off from where he took it on. “This car was rather complete, though sans motor and transmission, and we had plenty of parts around to get it running,” he said. “With a four-bolt-main 350 and a decent buff-job on the paint, this became my daily driver through my senior year of college and into the professional working world when I started at Holley in January 2004 as a Research Engineer.”

While in Bowling Green, he touched up the interior, re-covering the back seat, fixing the door panels, and swapping out the sun-faded carpet. He hauled it to Jamie Blubaugh in Augusta, Kansas, for a six-point rollbar installation. Then the car went to Roger Bosley for paint. Since the majority of the sheetmetal was new and the quarter seams were well-done by Bruce Philbrook (Maize, Kansas), the car basically only needed “straightening” by way of several coats of high-build primer and block sanding. An Impala SS TJ saw parked at a pet store turned him to the color: Laser Blue Metallic.

As the world turned, so did employment for this aerospace engineer. In 2005, he accepted an offer from Boeing in Wichita. After a slew of small-blocks, he thought he saw sparks from an LS arcing on the horizon. He grabbed an LQ4 and parted out the 383 stuff to fund the 6.0 junkyard jewel—ported heads, Lunati cam, Holley swap oil pan and motor mounts, headers, intake manifold, NOS plate, and Dominator ECU and harnesses.

Prior to the winter of 2010-2011 TJ got hooked up with an episode of Pinks. Their rules forbade any coolant other than water cut slightly with antifreeze. Abnormal cold cracked the lifter valley, so in the 2013-2014 off-season, he went on the hunt gathering parts for a serious Brian Tooley-built 416-inch LS.

He also signed up for the 2014 Drag Week epic but had no desire to pull a trailer. He reclaimed trunk space, situating a Rick’s stainless tank with 450-l/hr in-tank pump under the floor. He wanted full-length tailpipes but the ARB Air Locker links occupied the space where they would pass over the rear axle. He fixed that with a UMI 1 3/8-inch under-axle bolt-in drag bar. He reworked the suspension with TRZ chrome-moly drag racing upper and lower control arms and TRZ billet steering arms (to improve bumpsteer), Viking double-adjustable coilovers, and Wilwood Dynalite brakes. Though he usually punches a Powerglide, for the Drag Week SR SB NA class (Street Race Small-Block Normally Aspirated) he put up a reverse-pattern, trans-brake-equipped Turbo 400.

So how’d that trek transpire? Besides losing a tailshaft housing bushing on I-35 on Day Two and hurting a gearset on Day Four, he ended up finishing Fourth in SR SB NA with a five-day average of 10.97 at 121, set a personal NA best of 10.71 at 123.6 … and made several new hot rodding friends. Before closing the 2014 season, with the ’Glide back in, the Dyno Dynamics eddy current chassis rollers netted 530 horsepower on nuts and 755 on squeeze.

The fussin’ didn’t stop there. In 2015, with the car finally final, he ran a nitrous best of 9.62 at 140 on a relatively small shot. Then, at Street Legal Shootout in June, he set a new True Radial personal best of 10.75 at 138 on True Street hard-compound mud and snow rated Futura Super Sport 275/60 tires—not drag radials. He finished runner-up at that event. He attended a variety of local and regional street car gatherings, winning three or four Sunday Fundays to the tune of $1,000. But the ultimate achievement took place in Oklahoma City at the inaugural Outlaw Armageddon No Prep race and winning the Pure Street class, a new favorite trophy, and $1,600 to boot!

(As of this writing, TJ has since hit the quarter-mile and upped the nitrous dose with a 250-shot and additional chassis tuning and was able to muster up the car’s best lap ever with a 9.24 e.t. at 146 mph.)