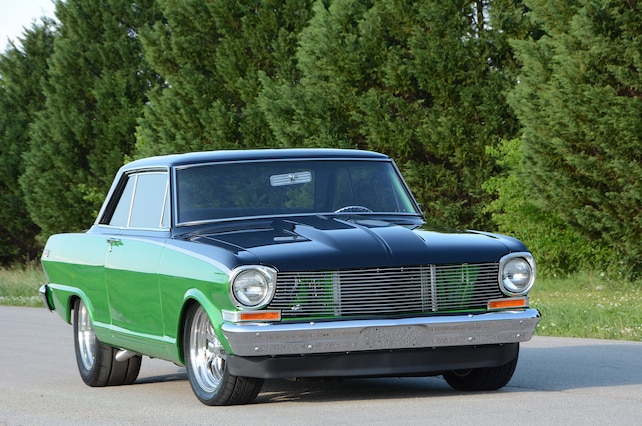 Ron Porter has been around fast cars for as long as most car guys have been alive. He has turned many wrenches, painted many panels, and driven many drag cars over the years but decided to build a street car a few years ago. In an attempt to build something practical to drive on the street, he started searching for a potential candidate when a co-worker sold him a 1962 Chevy II that he had been holding onto for 20 years. After striking a deal, Ron knew this would be an excellent project and wanted his son Trevor to be a part of it. Two years and thousands of dollars later, the father and son build is one of the slickest Chevys in the Southeast, and certainly the fastest street car in Ron’s hometown of Rossville, Georgia. Ron and Trevor received lots of help from friends like Steven Crouse, Harold Crouse, Jacob Branham, and Jonathan Gudel along the way.

With the goal of driving the car to local car shows and cruise nights, Ron went away from his drag racing roots and opted for a more street-friendly combination. The car was in fair condition when he got it but needed typical rust repair and a full suspension overhaul. Rather than rely on stock equipment to keep his Chevy II glued to the pavement, Ron called up the folks at Total Cost Involved (TCI) and ordered a truckload of suspension parts. He went with a TCI front suspension kit, which is a complete subframe, outfitted with tubular control arms, a 1-inch sway bar, and a rack-and-pinion steering system. Ron upgraded to a set of billet coilovers on all four corners.

Out back, Ron used a TCI four-link suspension kit, which greatly improves upon the original leaf spring rear suspension. Ron mini-tubbed the car during the rear suspension installation, offering lots of room for wide rear tires and wheels. Included in the TCI four-link kit is a pair of subframe connectors and a driveshaft loop for safety and strength. The rearend housing is a Ford 9-inch narrowed to 52 inches and packed with an Eaton posi differential, Moser axles, and 3.40:1 gears. When it comes to stopping power, Ron used Wilwood products throughout, including an aluminum master cylinder, 12-inch drilled and slotted rotors, and polished four-piston calipers. Rolling stock consists of Billet Specialties Fast Lane wheels, measuring 17x7 up front and 18x10 out back, wrapped in Nitto rubber, measuring 235/45R17 and 305/45R18, respectively.

Under the hood you’ll find an incredible amount of modifications, from the smoothed firewall to the custom inner fenders, and, of course, the turbocharged LS engine that makes for a beautiful centerpiece. It all starts with an aluminum LS2 block, which currently displaces 403 cubic inches, thanks to an Ohio Crank 4340 crankshaft with a 4.000-inch stroke and a set of 4.000-inch JE pistons. Connecting the two is a set of Ohio 6.125-inch connecting rods, and Ron built the combination to have a boost-ready 9.3:1 compression ratio.

Atop the short-block is a set of Pro Comp cylinder heads, modified by Tommy Hale. The heads were CNC-ported 225cc runners out of the box, but Tommy opened them up to 240cc, while also adding Ferrea guides and valves (2.02/1.60-inch) and performing a five-angle valve job. The valves are operated by a Brian Tooley Racing Stage IV turbo camshaft that features 234/239-degrees duration, measured at 0.050-inch lift, max lift of 0.610/0.600-inch, and is ground on a 116-degree lobe separation angle. Ron used a set of Brian Tooley Racing valvesprings, and finished off the valvetrain with a set of Comp Cams pushrods and rocker arms.

Air enters the engine through a Holley Mid-Rise intake manifold, while 93-octane fuel is sourced from a Tanks Inc. tank, fit with a Holley 720-gph electric fuel pump. Steven Crouse built the headers and turbo piping, using a Forced Induction billet ET-R turbo that measures 80mm. The system uses a Holley EFI throttle body, a ProCharger blow-off valve, and a custom 90-degree elbow into the intake. Steven also handled the tuning on Ron’s Chevy II, using a Holley Dominator EFI system to dial in the specifics. The engine is built to withstand up to 30 psi of boost, but for now is on a conservative tune. Power is transferred through an RPM Racing Transmissions Level VII 4L60E automatic transmission that uses a Precision 9-inch multi-disc lockup torque converter to allow the car to stall to 4,000 rpm and lockup on the top end. While Ron hasn’t strapped the Chevy II to the dyno (yet), you can bet this combination makes four-digit horsepower at the rear wheels.

The car’s stance and well-equipped engine are enough to grab lots of attention, but the color combination gives it even more wow factor. Ron has done paint and bodywork for many years, so when it came time to paint the Chevy II he wanted to show off a little. Ron straightened and aligned the panels before slathering on the Axalta base/clear materials. The color is Synergy Green with black and silver accents. Ron mixed some Prizmatic flake into the clearcoat for a little extra dose of awesome.

Ron also handled the interior work, installing Procar bucket seats, new carpet, and factory-style door panels. A Dakota Digital gauge panel rides in the original dash, while a Holley digital dash unit is within reach to monitor and adjust the Holley EFI system. Ron grips a Billet Specialties steering wheel, mounted to an ididit column, while his other hand operates the B&M Bandit shifter. The interior is comfortable, unlike some of the race cars that Ron used to climb in and out of on a regular basis.

While it wasn’t any cheaper to build, Ron’s 1962 Chevy II certainly outperforms his previous drag racing machines in terms of practicality and fun factor. He can cruise on the interstate, tackle the twists and turns, and then bolt on some slicks if he wants to go fast at his local dragstrip. He has yet to drag race the car but once all of the bugs are ironed out of it we’re sure he’ll find out what it can do. For now, he’s soaking up all the action at local car shows and cruise-in events, while tweaking the setup and having fun along the way.