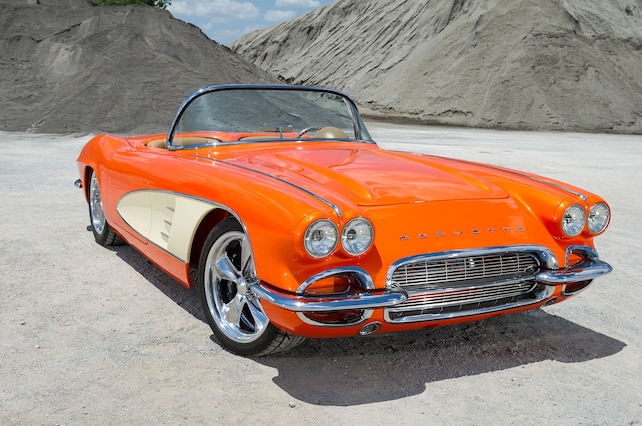 It seems any time there’s a hard-luck story about a man experiencing marital misfortunes and there’s a Corvette involved the Corvette always seems to end up changing hands. Take, for example, the 1961 Corvette convertible John Bartholomew of Oklahoma City, Oklahoma, found minus engine and transmission, with nothing left under its hood but traces of a disastrous fire. “It was a 30-year search for the perfect restomod project.” John has always been a fan of early Corvette styling so when he ran across this 1961 Corvette caught in the crosshairs of a divorce he jumped at the opportunity to buy it.

The previous owner held onto the Vette for 20 years without any real movement toward restoration, and then in John’s hands the burned-out hulk sat for six more years while he collected parts. It was beginning to look like this 1961 Corvette was never going to be a whole car again.

Then, one weekend John went as a spectator to the Southwest Street Rod Nationals in Oklahoma City, and ran across a few examples of show cars built by Harold’s Hotrods and decided they’d be the right shop to commission with the build. The decision to use an AME (Art Morrison Enterprises) chassis for the Vette’s foundation was unanimous. Harold’s Hotrods’ past experiences with excellent fit and finish, plus great customer service combined with John visiting Art and Craig Morrison at their Washington state manufacturing site made it a no brainer. Harold Clay, owner of Harold’s Hotrods, stated, “A Morrison is the only chassis we’ll use.”

In its second generation since Morrison’s first GT Sport chassis for C1 Corvettes, the latest version GT Sport chassis has gone to an AME Sport IFS front suspension with Wilwood spindles instead of C6 Corvette components, which allows the use of wheel diameters down to 15 inches. The Foose Legend wheels on John’s Corvette are 18-inchers shod with 235/40ZR18 Nitto NT555 tires in front and 285/40ZR18 Nitto NT555 tires in the rear. The brakes at all four corners are Wilwood 13-inch diameter discs with six-piston calipers in front and four-piston calipers out back. At the rear, an AME triangulated four-bar suspension carries a 9-inch Currie rearend with 3.70 gears and limited-slip. Damping is handled via Strange Engineering adjustable coilover shock absorbers.

If we were to go only by what John had written on the tech sheet it appeared he didn’t have a lot to do with building his Corvette other than picking out the color and engine choice, but Harold clued us in that John had a lot to do with the car’s construction. Harold explained John is very low key and underplays what he does, but is quite capable of producing exceptional work. The Morrison chassis showed up at Harold’s Hotrods and then John hauled it 90 miles back to his state-of-the-art home shop and fully detailed and assembled the chassis, finishing it off with silver powdercoating by S&S Coatings of Enid, Oklahoma.

There was a strong suspicion going in, but commencing the ’61 Corvette’s bodywork confirmed the engine fire had created an irreparable amount of warped fiberglass and brittleness throughout the front end. Harold advised John a new front clip from the firewall forward had to be installed. Harold’s Hotrods’ bodyman Cory Herron replaced the front fenders, hood, grille surround, cowl, and valance before moving on to bespoke modifications. John explained his car is a true roadster with the side window glass and the mounting points for the soft-top and hardtop removed.

Underneath, the floorpan and undercarriage have been fully smoothed, providing a finish on a level equal to the topside of the car. Spraying the paint on slick and spectacular is Harold Clay’s specialty. Harold laid down a refrigerator white base and then drenched the ’61 in House of Kolor’s stunning citric hue Tangelo followed with what appears to be a foot deep of clear urethane. The finishing touch was a color sand and rubout topped with numerous coats of slippery car wax. A styling touch reminiscent of GM concept Corvettes of the late 1950s, the coves have been deepened and true to 1961 form two-toned with a custom cream color, and finished with a last for 1961 polished stainless steel cove molding.

Talk about a hands-on and passionately involved owner, the only time John’s Corvette left the premises of Harold’s Hotrods before completion was when John personally transported the car to Recovery Room Interiors in Plattsmouth, Nebraska, for a complete high-end custom interior, including the trunk. Tracy Weaver, the upholstery shop’s owner, and helper Jacob Nash started at the floors with Dynamat thermal sound deadener and worked upward. The bucket seat frames were custom fabricated in-house and then closed-cell, high-density foam was sculpted to fit John’s physique.

Following the special foam came Camel Tan Italian leather hides stitched into a combination of specially perforated hides. The one-off leather-covered grab bar was fabricated out of aluminum and trimmed in Camel Tan leather, sharing hide and hue with the French Seamed custom dashpad. Keeping a vintage Corvette flavor, Classic Instruments with a traditional 160-mph speedometer fill the dash cluster and a Billet Specialties Outlaw steering wheel completes the vintage Corvette feel. And no car is a show car until it has show-quality chrome; Paul’s Chrome Plating of Evans City, Pennsylvania, did the chrome plating.