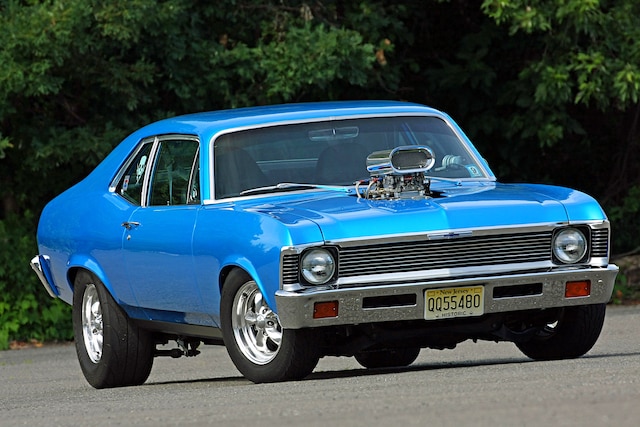 Bill Lowe has done this car twice in the 28 years he’s held the keys. The first time, he and his friends combined talent and experience to make it happen. The next go-around, Wayout Willy stepped up the game, bringing his expectations and his 1972 Nova to Roy Anania at South State Speed Shop (SSSS) in Hackensack, New Jersey, for the supercharged engine, and then to Tony Nese for the full-on body rub at Ultimate Auto Body over by Nutley.

What these guys did reflects their thoughts and mandates about the life that we are all in, doing it more or less because their convictions are old and their traditions run deep, so they are rarely driven by popular notion. That’s why this Nova is still around after all these years. You love it. You treat it. You drive it anew. While Bill could have gone billet and flash, he felt there was still more he could learn and apply by abiding the old ways.

Bill spiels: “The blue ’72 Nova was my second car ever. I got it because I was looking to take my first car—a red ’73 Nova—off the road so I could rebuild the 350 after a couple years of abuse. The red car belonged to my parents. My dad bought it in ’75, and then it ended up as Mom’s daily driver before I got my hands on it. The ’73 I used in high school and later for work. I learned how to drive with it. Back in ’83, my aunt Rita went with me to take the road test for my license.” Regardless of their disposition, to Bill, the Novas were like family members and seminal in his development.

The salient fact is that Bill put himself on the line, spent what he could afford and did a great deal of the work out of his garage, with his pals, like would have been done before there was anything that approached a specialty car-building company. Fifteen years ago, scratch-built car shops were scant, but by now there’s some magician in every major city and all the way in between who can build an expensive, “exclusive” hot rod, one that ultimately reflects the veracity and the style of the builder, but not necessarily that of the owner. Bill would never give up that control.

“As it happens to so many of us as time passes, our toys take a back seat to the kids’ toys and household expenses, and the company car became my daily driver,” he opined. “Fortunately, I was able to keep the blue car in a rental garage and then reunite it with the red car when my youngest brother, Chris, was done having his fun with it. Our little sister, Amy, was not interested in a thoroughly used ’73 Nova, so both cars continued to sit in storage for a dozen or more years.

“I’d bring my boys, Billy, Danny, and Matt and then my daughter Emily over to the garage every so often to check on the old guys and wash off the dust, but it wasn’t until Billy was getting ready to drive did I have the thought and time to start working on the cars again.”

So he did. Bill pulled the tunnel-ram engine to have it rebuilt at SSSS. Roy Anania pointed out some excessive carbon buildup, which he thought might be due to the tunnel-ram dual carbs. He said it might be better off with a single-plane manifold and one large carburetor, but Bill already had this hole cut through the ’72’s hood. Roy, always a quick thinker, said he could go with one of his blower engines. “OK,” Wayout Willy said. “I’ll cut the hole bigger!”

In order to quench the little rodent’s thirst, he installed an aluminum fuel cell in the trunk and capitalized on the room it availed. Where the stock tank once was, he installed engine oil and transmission coolers and fixed them with electrically driven fans. He discovered that running the hoses to the back of the car and then back to the engine and transmission assists in the cooling process, besides adding another quart of fluid to each system. Engine coolant is kept temperate by a PRC aluminum radiator and an electric fan.

There are traditional tenets and one of them is the 15-inch wheel, like it would have been back in the day. Bill: “The M/T 275/60 ET Street S/S rear tires are wrapped around 15x8 Boyd Coddington Smoothie II rims and the 26x8.00R15LT Sportsman S/R Mickeys are on 15x7 Smoothies. The SSBC front brake conversion was ordered with drop spindles, and a little cutting of the front coils got the stance down to where I wanted it.”

After he’d gathered everything he thought he’d need, he got the Nova mocked up over at Joey T’s Absolute Performance in Little Ferry, New Jersey. Then he knocked it all apart, had it stripped to bare metal, and got it ready for paint. “Tony and the guys at Ultimate Auto Body used a few patch panels in places that I had Bondo’d over and used GM touch-up paint to cover years ago.” He saw the Nova’s future in Axalta Hot Hues Twilight Blue.

Bill had an ulterior motive. He digs the National Nostalgic Nova competition. “It took a while to get the scores up from the initial Silver 854 at Gettysburg, to the 895 when I brought it down to Charlotte for laps at Lowe’s Motor Speedway, and then the close 897 in Columbus.

“That one extra point for the fire extinguisher given to me by my wife, Vicky, and Terry Wolf’s touch-up the morning of judging day squeaked me into Gold level certification with exactly 900 points at the 2015 Nova Nationals in Dover, Delaware.”

He’s already made plans for getting back on the red Nova. Wayout Willy will always give the locals wicked bad willies.

A 728-horsepower big-block Rat engine powers this 1972 Nova down the strip, yet carries mild street manners for cruising to the local cars and coffee gigs.

» Read More
This 1972 Chevy Nova is an exercise in determination, perseverance, and cash!