1961 Corvette Possesses All the Looks and Performance

Time Machine: You can’t rush art when it comes to revising a classic ’61 Vette 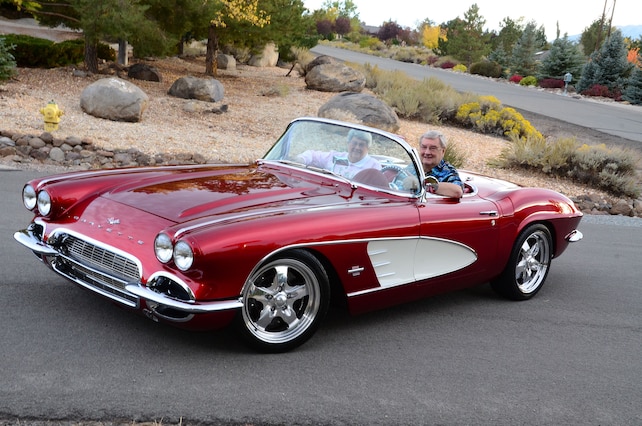 What Vette enthusiast doesn’t recall the first time he or she saw or even drove a Corvette? It’s one of those moments that are indelibly imprinted on your brain, like encountering a rare wild animal for the first time. Except that this automotive creature can be captured and kept for posterity.

That was Dave Gibson’s experience as a young man, when a friend bought a new C1 Corvette. “On the day he took delivery, he allowed me to drive it,” he reminisces with a gleam in his eye. “From that day forward I knew Corvettes would be part of my life, somewhere in the future.”

The trouble is it took way longer than expected, as he encountered various setbacks. But he’s philosophical about all the delays and challenges: “The longer it takes, the sweeter the result,” he notes.

An eventually satisfying outcome would require a substantial effort, though, partly because he wanted to buy an early model Corvette and restore it with the engineering and technology of today. Easier said than done as he had to overcome a few technical hurdles along the way. Fellow Corvette restorers will likely appreciate hearing about them in order to avoid some of the same pitfalls.

Gibson’s new-tech approach on an old-school car is common theme of restomod projects, a form of revisionist history that takes a classic design and brings it forward. But not all restomods are alike, as the details differ depending on the owner’s vision.

In Gibson’s case, it started out when he and wife, Karen, retired to Reno, Nevada, and obtained a 1961 Corvette at auction in 2003. It had a funky Jewel Blue paint scheme with white coves, a “20/20” job at best (mediocre except when viewed from 20 feet and at 20 mph). Plus, it had no brakes; a worn interior; and a tired, base-model 283ci V-8 backed by a mushy Powerglide slushbox. The chrome needed reworking as well, but the car had two things going for it: a solid frame and clean body, with no cracks or modifications. So it had “good bones,” making it a suitable candidate for a number of modern upgrades.

Since Gibson’s prior professional background was in upper management at a large shipping company, he was comfortable with putting together a plan to create the kind of car he wanted at the endpoint of the process. But he readily admits that he did not possess the tools, knowledge or experience to pull it off alone, as this was his first project car. So he found a shop in Reno to initiate the project. “Since I was retired it was easy to spend as much time as needed to ensure the end product turned out as I envisioned.” Well, actually that proved to be problematic, as we’ll see.

After a total teardown to remove the body, he sent the frame to Paul Newman Car Creations with a full list of what was going into the car. The chassis came back to him strengthened and fitted with Grand Sport disc brakes that included 13-inch rotors all around, along with a refurbished 1996 Corvette independent front and rear suspension, plus Bilstein shocks and a Dana 36 third member with 3.07 gear ratio. The chassis was also set up to accommodate all other parts included in the restoration, as noted below.

For the next year, Gibson oversaw having the car put back together with a new 2003 LS1 engine and 4L60E automatic transmission. Enhancing the engine bay further was a March polished serpentine belt and pulley system and a Cal West aluminum radiator. That drivetrain setup required yanking out the old rat’s nest wiring and installing a new handbuilt harness with a Painless 18-circuit fuse panel. For improved piloting, he added a Chassis Engineering Stage 3 power steering pump and line kit.

He updated the custom cockpit treatment with a Dakota Digital clock and gauge package, along with a Lokar billet gas and brake pedal assembly, and Lokar floor shifter. A Pioneer DEH-P3600 AM/FM sound system was intended to blast out tunes when Gibson isn’t relishing the new notes of the Flowmaster exhaust system.

The list of upgrades sounded good in theory, but in practice the car still needed more sorting out, and correcting some substandard work. For instance, the air filter was installed by drilling holes into the intake for screws, which left metal shavings in the intake. Neither door would close properly, nor did the top fit. Some older, faulty wiring caused two fires in the car during the first remodel, which Gibson only found about well afterwards.

Between 2004 and 2009, the car was in and out of the shop correcting various problems. Given these issues, and spending far too much time trying to correct matters, he knew it was time to cut his losses. Lesson learned? “Bottom line, I should have spent more time vetting this shop before agreeing to cost and project,” he recalls with a wince.

So in 2009 he decided to find a new restoration shop that could correct them, along with a number of other problems. To take the car to the next level in both appearance and performance, he went to Dalool Performance Service Center in Reno with its owner Andy Dalool was the right choice.

Rectifying the issues with the car first required reworking the wiring, so Dalool hooked up a new 12-circuit main harness and LS1 harness, as well. MSD coil packs and spark plug wires provided a hotter ignition. He also installed a custom cooling system for the drivetrain with a Be Cool LS1 radiator, and a power rack controlled by a Flaming River steering column with custom-built steering shafts.

Out went the old intake, replaced with a LS2 unit and a Professional Products 96mm throttle body, mounted with a custom billet adapter. For additional safety, Dalool fabricated a steel-banded non-return fuel system that draws from a stainless steel 1961 gas tank with a 65-psi pump. Exhaust flows through a set of Edelbrock coated headers.

The gauges and clock were upgraded too. “Originally, we installed the Dakota Digital clock and gauges, but it was difficult to read the gauges while driving in the sunlight and top down,” Gibson explains. “So we changed them out for the Dakota Analog/Digital system. This new VHX system made a world of difference and looks great.”

For all the improvements in the car, what gets the most attention? “The most asked question I get is, ‘Where did you get those seats?’” They are the original ’61 seats with wings welded on each side, which gives it a more modern look. “We moved the driver’s seat back,” he adds, “and tilted the front cushion down to accommodate a taller person.” This setup works in conjunction with being able to install a smaller steering wheel due to the new suspension.

Last but not least, however, the most compliments are received regarding the car are the paint color and its appearance. It truly shines in the sun with its seven coats of gold, seven coats of candy-apple red and seven coats of clear. On sunny days the gold color really shines up the candy apple.

So all told, this time machine not only revisits a fond memory for Gibson, but also modified history, resulting in a fulfilling finale. And it makes for a really good time behind the wheel, too.