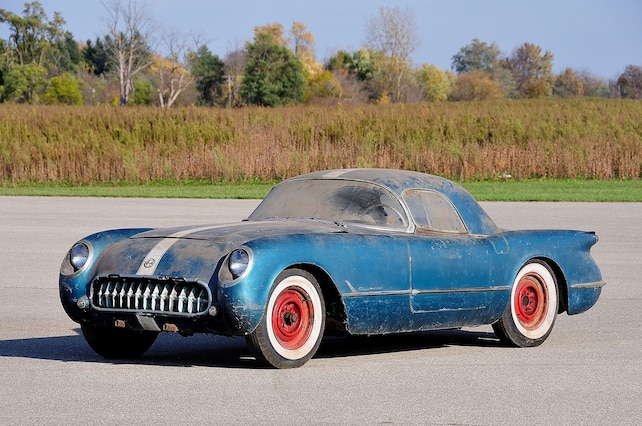 More than 50 years ago, Jim Wallace bought his first Corvette, a 1960 with white paint, black top and interior. Under the hood was a 283-cubic-inch V-8 engine with two four-barrel carburetors and a four-speed manual transmission. He owned it for several years before selling it in 1970 when an opportunity to get his hands on a used 1969 came along. He’d just started his career in the automotive industry working as a field engineer for Holley Carburetor Company.

In 1975, a once in a lifetime career move came along when he signed on with the General Motors Company. He retired 25 years later in 2000 after heading up an engineering, sales, marketing and service group at the company.

Back in 1964, Jim Wallace purchased his first Corvette. Over the course of the next five decades he’s owned numerous Corvettes while assembling a world-class collection consisting of rare, original unrestored and low-production models.

In 2010, Wallace rescued his first Corvette when he came across an original LeMans Blue 1969 L88 stowed away in a building since 1979. It had sat in the same spot untouched for 31 years. Nearly 3 years later, in 2013, Jim Wallace located a second LeMans Blue 1969 L88 Corvette sitting in a barn untouched since 1988. He still owns both and they’re part of his collection.

The amount of knowledge, trust, good fortune or luck required to find even a single barn find is mesmerizing. Finding more than one during a lifetime unreal. As Jim Wallace recently stated during a conversation, “Once you discover a Corvette barn find it changes you. From that day forward it’s as much about the hunt as the find. I’m always on the lookout.”

In the spring of 2016, Jim Wallace added a third Corvette barn find to his collection in the most unconventional way. Attending a Morrel Mushroom Dinner, he and his wife, Cindy, are seated at a table with eight other people. During these special functions seating is not pre-arraigned so you don’t know who you’re going to end up sitting with at the 10-person dinner table for the evening. As it turned out, Jim and Cindy Wallace were placed next to George and Julie Cromer. The two couples introduced themselves, and as the evening went along Jim Wallace and George Cromer discovered they’d both retired from General Motors. Things got interesting when they found out both had worked as engineers with the company.

The topic of Corvettes came up and Wallace mentioned he’d been a longtime Corvette enthusiast and currently owned a small collection of Corvettes. He went on to talk about his involvement with the National Corvette Restorers Society, and for the past 19 years conducted and maintained the survey for the 1971 LS6 equipped Corvettes.

Then George dropped a bomb when he stated: “I have a 1955 Corvette, bought it in 1959 at Jefferson Chevrolet in Detroit, Michigan. I drove it for nine years and it’s been sitting in my garage ever since.” Jim Wallace could not believe his ears. Had he just caught wind of a 1955 Corvette (700 produced) barn find? Being well versed on Corvettes and the rarity of the 1955 model, Jim asked if he could get a look at it. At the end of the dinner the two exchanged e-mail addresses and phone numbers. George and Julie Cromer mentioned they’d be leaving for a three-week vacation to the Far East the following day and once they returned Jim could come to their house to see the car.

About a month later Jim Wallace made the 8-mile trip (yes, the car was pretty much in his backyard) to see the car. As he pulled into the driveway, the garage door was open and before him was a Pennant Blue (approx. 45 made, discontinued in April 1955) with white stripe ’55 Corvette. Outside the garage, sitting on the grass were numerous boxes and other items. It appeared the couple had removed them from their storage space on top of and around the Corvette. (Editor’s Note: According to our “bible,” the Genuine Corvette Black Book, the hardtop wasn’t a factory or dealer installed option but something that was offered by aftermarket companys).

When Jim walked into the garage to see the car he could not believe his eyes. He could not see through the windows of the Corvette due to the buildup of dust and dirt covering the entire car. All four tires had gone flat and the hubcaps missing. George Cromer mentioned they had been stolen years before. As Wallace looked the Corvette over it appeared everything else was still there. Though dusty and dirty, the little blue Corvette looked like a time capsule and he could only think, “What a sight and find!” With some effort, he opened the passenger-side door, looked inside to see rodents had torn up the seats and created nests everywhere.

While looking at the instrument panel Jim noticed it was a radio delete. Moving to the driver’s side of the car he opened the door to see the original VIN tag attached to the A-pillar. Vehicle Identification Number VE55S001189 was stamped into the metal tag. He proceeded to open the hood to see the 265-cubic inch V-8 engine (693 produced). It appeared to be all there even though acorn shells were everywhere. The car had coolant in the radiator, motor oil in the crankcase and fluid in the automatic transmission, supporting George Cromer’s claim to have just stopped driving it a long time ago.

Jim opened the decklid and noticed rodents had taken refuge. Mice nests made from seat stuffing and acorn shells abound. The original jack, crank handle, and lug wrench was still with the car. He then went on to look under the spare tire storage panel and was surprised to see the original BFGoodrich Silvertown whitewall tire and steel wheel. It was incredible to see a 61-year-old Corvette retaining its jack components and factory original spare tire.

The underside looked intact and in good condition overall with no rust holes in it. The right-side fender had an L-shaped crack in the fiberglass panel.

After seeing it firsthand and taking it all in, Jim Wallace concluded the car was all there and in reasonable restoration condition.

During the visit owner George Cromer mentioned the engine had been rebuilt at the iconic Vinsetta Garage located off Woodward Avenue in Berkley, Michigan. Back in the day they were well known for their engine work and mechanical expertise. Their purpose was to keep the hot rods and classic automobiles cruising Woodward Avenue.

After taking it all in Jim Wallace asked owner George Cromer if the 1955 Corvette was for sale. Without hesitation, his wife, Julie, answered, “Yes, please get it out of the garage.” Wallace looked over at George who also shook his head and nodded. A deal was reached with the stipulation that Cromer’s would first approach he and Julie’s two sons to see if they wanted it.

About a month later Jim Wallace received the call he had been waiting for. It was time to go pick up the 1955 Corvette and take it home.

He and friend Mike Jones took an enclosed trailer for the pickup of the car. They carefully pulled the trailer into the garage. Each tire on the Corvette was put onto a dolly then a power winch was used to ease it into the trailer. After getting it to the Wallace shop, the tires and wheels were removed. A local tire store installed inner tubes to each tire, thus keeping them intact and with the car.

To move the car around the brake drums received a little TLC to free them up for moving. At the time of the photo shoot the 1955 Corvette was exposed to the outdoors for the first time since 1968. A license plate found in the passenger side of the trunk compartment area indicates the car was last plated and registered in 1968, nearly 38 years ago.

After careful thought, Jim Wallace has sent the 1955 Corvette to Gillespie, Illinois, where it will undergo a total body-off restoration by Dick Ferrando and his team at D & A Corvette.

The plan is to restore it back to factory correct standards when it was built and left the St. Louis Assembly Plant in the spring of 1955. The restoration will take less than 2 years to complete. Stay tuned; we are sure the end result will be breathtaking.

Time Capsule 1955 Corvette That Runs and Drives Like New

Classics like this 1955 Corvette endure the test of time, despite many miles and many smiles along the way, it drives like new!

This Sebring 12-hour veteran, known as "The Privateer," is actually a 1955 Chevrolet Corvette. It was the only privately entered Vette in the 1956 race.

» Read More
1955 Chevy Corvette - The Corvette Is No Dog Anymore

See how this 1955 Chevy Corvette change the image of the Vette forever. Only at www.superchevy.com, the official website for Super Chevy Magazine.

It's the 50th anniversary of the 1955 Chevrolet Corvette that had the distinguishable gold v on the V8 emblem. It also received a Top Flight from NCRS, and is scheduled to be featured at Corvettes at Carlisle and Bloomington Gold displays this year for the 50th celebration of the '55 Corvette. - Corvette Fever Magazine

Check out this month's Right Hand Drive as we check out The British Classic Corvette Club UK and other European COrvette events. - Corvette Fever Magazine