This 1961 Chevy Impala Was Worth the Wait

A Piece Of The Action 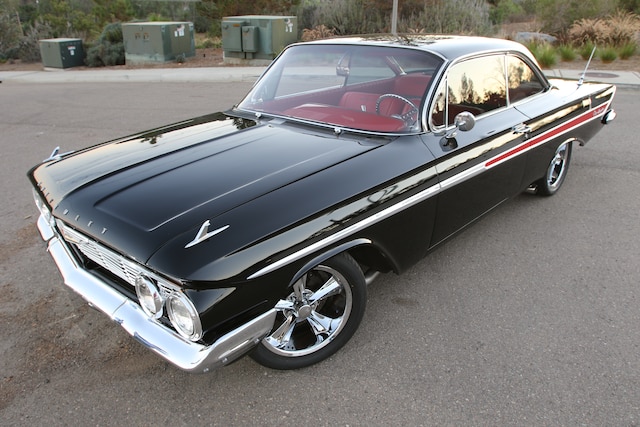 Some hot rodders are lifers, always knee-deep in the passion, but quite a few fall in and out of the hobby due to the demands of life. Ron Morse, of Valley Center, California, falls into the latter category. You see, back in 1967 he had a sweet 1960 Impala but it was sold when he was drafted into the Army. Once done with his service, he became wound up in the business of life with raising a family and his career in law enforcement. While he often thought of hot rods, he was just too busy to dive back in.

Fast forward nearly a handful of decades and Ron, now retired from the San Diego Sheriff’s Department, had some extra time, and resources, on his hands. As he explained, “I had some cash from an inheritance and after giving some of it to our children, and a few home improvements, I thought I deserved some of the action for myself.” Ron thought back to his ’60 Impala and after some reflection decided he liked the styling of the ’61 just a bit better, so the hunt began. “I saw a clean ’61 for sale at a local car show and got the information but never made contact with the seller. We kept checking out cars but none interested me like the one I saw at the show. Eventually, I got a hold of him and we met up to check out the car,” recalled Ron. The ride was in great shape but had huge wheels and leaned in the lowrider direction; not Ron’s style but something he could work with. Cash was swapped for the title and Ron was back in the hot rodding game big time.

The body and paint were good, but the rest needed a complete rebuild. The Impala was driven over to Hot Rods and Custom Stuff in Escondido, California, for a full frame-off restoration. The driver-side floor was replaced and the interior was shot in Lizard Skin sound deadener before getting new carpet. It received new seats, custom gauge panel, Auto Meter gauges, an ididit tilt column, and Vintage Air HVAC system. The changes kept stacking up.

The tired 305 V-8 in the Impala was ditched in favor of a Chevrolet Performance ZZ383 stroker crate engine. Backing up the 383 is a Gearstar 700-R4 four-speed automatic that spins the ponies back to a posi rear with 3.73 gears.

The ride was done and much closer to Ron’s hot rod vision, but there were still a few things that needed attention. As Ron explained, “I didn’t like the car’s steering and the exhaust system wasn’t right. I also wanted a bit more power out of the crate engine so I took it over to Evod Garage in Escondido, California, for some more work.”

Chris and Shaun at Evod ditched Ron’s dual-quad carbs in favor of a 750-cfm Quick Fuel Slayer carb riding on an Edelbrock intake. They also popped in a new Comp hydraulic roller bumpstick (230/236-degree duration at 0.050 with 0.510 lift.). In addition, the Evod team swapped in a quick-ratio steering box and added some Global West suspension widgets along with a set of Bilstein shocks to help the handling and CPP brakes to get it stopped. Hooker Super Comp headers route exhaust gasses out through a new Flowmaster exhaust system. The camshaft and muffler changes got the Impala sounding just the way Ron wanted. The changes boosted the output of the 383 crate engine to right around 460 crank hp; more than enough to put a smile on Ron’s face.

The biggest visual change the Evod team made to the Impala was ditching the 15-inch rally wheels and large sidewall tires in favor of something with a more updated style. The choice was a set of chrome Rocket Racing Booster 17x8 front and 18x9 rear wheels wrapped in Falken FK453 performance rubber (245/45/17 front and 275/40/18 rear). The modern wheels changed up the look of the vintage Chevy while the Falken tires gave the Impala more grip in the turns.

It may have taken Ron over 40 years to get back into an Impala, but when he’s cruising the coast with his wife, Catherine, he knows it was worth the wait.