Mega Vega Man: Racer Paul Ziemba retired his track car and put It back on the street 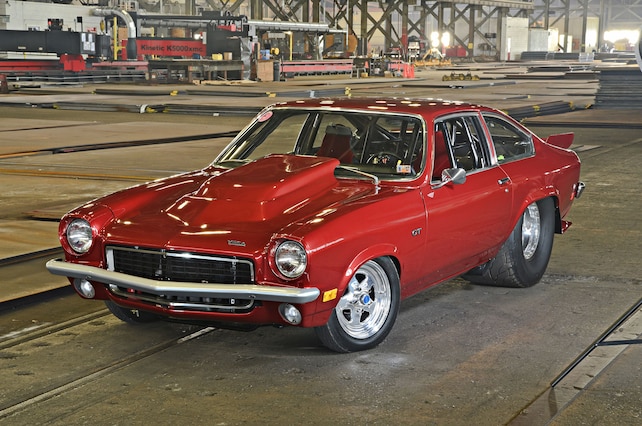 Growing up only a 30-minute ride to Maple Grove Raceway, it’s only natural that the world-famous dragstrip would beckon young local hot rodders to come and play on its 1,320-foot raceway. Like so many others, local Pottstown, Pennsylvania, native Paul Ziemba would heed its call and immerse himself into the world of quarter-mile racing. And he can thank his dad, Tony, as well for the introduction, as his father’s D/A ’41 Willys coupe was the main instigator in bringing Paul to the track, and familiarizing the youngster with high-performance GM products.

Paul quickly became infatuated with all things Chevy. In short order he found himself barreling down the Maple Grove track in a ’55 Bow Tie hot rod he put together himself. That sweet ride was soon followed by a ’69 Z/28, his street car, which soon morphed into his main racer for the next few years. After snapping several 12-bolt rears out on the track and then having to call his “pop” for tows back home, he decided he was finally going to build himself a real race car to hit the quarter-mile strip with. So, Paul started his search for the ride he was going to build into his ultimate racer. It was the mid-’70s and Vegas were all the rage in Pro Stock circles. The design of the little Chevy hit a note with Paul and he became interested in possibly using one for the basis of his build. He located a newly wrecked ’73 Vega GT sitting in a salvage yard, just begging to be saved and reincarnated. He knew right at that moment that the Chevy compact was coming home with him. He got a deal on the ride and brought it back to his garage for its initial ground-up build that would turn the Vega into a quarter-mile terror.

Even at his young age, Paul knew that safety always came first. So he started the build process by fabricating the frame and rollcage out of 1 5/8-inch chome-moly tubing; all Heliarc welded together by Paul himself. Out back he installed a four-link and wishbone suspension for optimum race day performance. And after two years of toiling on the compact, with help and support from his dad and Ed Quay Race Cars out of Pottstown, the Vega was ready to do damage out on the strip.

The Vega was bracket raced locally for the first few years with great results. But Paul wanted more. Then, in 1982, the NHRA came out with the new Super Gas class. This was an opportunity for the young driver to get into a class with more to offer someone like himself. Super Gas was based on a 9.90 index with a 0.40 pro tree. There were very few rules in SG and that made it all the more intriguing to young Paul. So he built a full-out race 350ci engine with the help of Fred Hartman and Jack Russin from Hartman Automotive in Lititz, Pennsylvania. Paul backed it with a Doug Nash five-speed, and sent the power out back to a Dana 60 stuffed with 5.57 gears. Summers Brothers 40-spline axles and a spool with billet steel bearing caps made the back end near bulletproof. He built it with all the best parts he could afford, as he hoped to leave the line at 9,000 rpm!

Paul raced this setup until 2000 when his wife was diagnosed with breast cancer. She valiantly battled the disease for two years before succumbing to its grip. After her passing, Paul couldn’t bring himself to race anymore, so the car sat unused for a few years. After getting it to the track a few more times, he decided his race days were over and retired the track version of the Vega … and then slowly started the process to make it into a legitimate street car.

Of course he had big plans for the compact, as it was not going to go back to its meek stock orientation … no way. Paul was going to build it up into a solid street performer, using its Pro Street roots as a basis for the modified restoration. So he sat down and devised a plan to make this Chevy into a road friendly racer with plenty of “Bow Tie Bravado” that you would expect from a quarter-mile race car!

First things first. Paul pulled the mighty small-block and five-speed out of the Vega. In its place he installed a potent 302ci engine he had pulled from a ’69 Z/28. Next, a set of Harland roller rockers and a pair of angle plug Turbo heads were added to the mix. Spark is delivered by a creative combination of a Truppi Kling crankshaft trigger, an MSD 7AL control box, Blaster coil, and a customized Vertex magneto by Mason Race Ignitions. An MSD multi-step retard was incorporated to control the timing when the NOS Big Shot nitrous shot is triggered. This hot Chevy small-block is cooled down by a Ron Davis aluminum radiator, matched up with an Evans Cooling water pump. A Nations 200-amp alternator keeps this system charged and ready to spark and is driven by a March serpentine belt system that adds a little bling to the front of the powerplant. Fuel delivery is executed by a Product Engineering fuel pump, which feeds a 1,050-cfm DeVane all-billet carburetor atop an Edelbrock SY1 Smokey Ram intake manifold. Exhaust duties are handled by Stahl 1 7/8-inch headers, leading into a pair of 4-inch Flowmaster mufflers.

Paul figured the Doug Nash setup would not be a practical choice for street applications so it was replaced with an ATI two-speed Powerglide transmission. A trans brake was added along with an 8-inch, 7,000-stall converter to help get in a little mischief out on the street. Out back those tall gears were cut down a bit, with a set of 4.56 gears installed into the original Dana 60.

At the corners, a vintage set of Bob Glidden Signature Pro Series Star wheels sit, 15x3.5 up front, 15x15 out back. They are shod with Mickey Thompson Sportsman Street Radials, 24x5.00 and 33x22.00, respectively. The latter are installed with a set of Champion Beadlocks to help secure the rubber under launch twist. Stopping power is supplied by Wilwood brakes.

The body was pretty beaten up by the time Paul bought the car in the mid-’70s, and after years of racing, it suffered from the stress of all those quarter-mile runs. So the complete body was torn down for a major refresh. He kept the larger rear wheel openings, which were made to house the huge drag tires he had out back, as he was going to keep a set of big meats on the car in its new form. Next, all the Lexan windows were removed and original glass was sourced for the rebuild. The body was stripped and made laser straight before several coats of MIPA Fire Red Pearl and clear were laid down by Denny Weaver at Paint by Weaver right there in Pottstown. The rear wing, which Paul originally fabricated for the Vega back in the ’70’s, was kept on the car to keep with the Pro Street attitude and look.

Paul kept the Pro Street theme with the interior. He held on to some of the qualities of the original Vega, using a stock Vega GT steering wheel and dash, and installing OEM-styled door panels and rug stitched by J E Somics Upholstery out of Pine Forge, Pennsylvania. JAZ poly bucket seats with Deist belts keep the occupants comfy and safe, and a Hurst Quarter Stick (built with an air shifter) gets the trans through the gears. A removable tunnel makes getting at the ATI a snap. The fully digital dash cluster is a UDX unit from Racepak. All the interior trim was finished off in aluminum powdercoat for a clean, metallic look.

In 2009, after five long years, Paul’s ex-drag racer was ready to hit the streets in all of its Pro Street styled fury! Though it spent most of its life chasing the Christmas tree, the car now lives a life out on the local streets where it hits the pavement daily. He’ll also hit the big East Coast shows each year, usually right along with Dave Haney and his Pro Street Vega, Fusion Bomb (“Viva Las Vega,” Aug. ’16).

Special thanks go out to Paul’s dad, Tony Ziemba, for encouraging in him the passion for hot rodding and for helping out with his Vega build. Paul would also like to give a shout out to the members of his club, East Coast Prostreets; a great bunch of guys who are helping keep Pro Street alive for future generations! For now, this Mega Vega will keep seeing time out on the streets under the guidance of Paul’s heavy right foot, as it has for the last 40 years of his ownership.