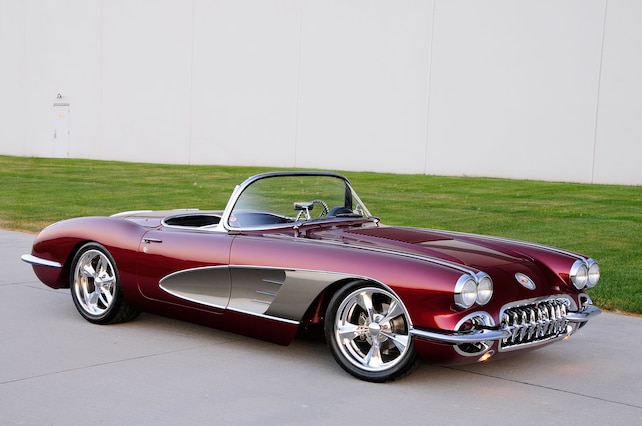 When you grow up in a small rural town in the Midwest in the ’40s it is easy to relate to agriculture and farming since it is a mainstay of the community. For Jim Stewart of Ord, Nebraska, growing up in a farming community was an adventure, especially since he was captivated by everything mechanical, as well as their inner workings.

It just so happened that one of the Midwest’s most famous early racing facilities was also located in his hometown, further fueling his thirst for performance knowledge. Established in 1926, the Valley County Fairgrounds played host to many of the countries well-known dirt track racers who competed on the legendary surface till it closed in 1964. There was plenty of activity in the area, which also brought an endless stream of racers and hot rods through the local streets to infuse plenty of horsepower into their neighborhoods.

This fusion led Jim to save money made from working the fields at a young age for his first car: a 1951 Chevy that he wasted no time in hopping-up. It was at the same time he fell under the spell of a particular 1953 Corvette owned by Clifford Stone, a local resident. The exotic lines of the car coupled with its Blue Flame Six engine were something he had never seen before and it left him with a lifelong impression. As the years passed Jim earned a degree in agriculture, raised a family, farmed and raised cattle, worked as a line mechanic for the local Chevy dealer and applied his performance skills at both the racetrack and with Speed Engineering in nearby Lincoln.

He built a stream of hot Chevys over the years and raced a number of them as well. We all know how having a particular car percolating in the back of your mind for decades eventually leads to reality, and Jim’s infatuation with early Corvettes led him on a quest to find a perfect building block to create the car he longed for. He eventually got a lead on a 1958 Corvette in northeast Nebraska so he and his wife, Mary Ann, made the trip to check the car out. Originally sold in Iowa, the car had moved onto its second owner and appeared to be in decent shape, although it wasn’t in running condition. A deal was made and it didn’t take long for Jim to get the car back on the road. A later inspection, however, proved that the rear half of the frame was suffering from severe rust issues. A call to the prior owner revealed that he had coated the area with acid in hopes of lightening the car’s weight for drag racing, but never properly washed it clean, thus resulting in the area disintegrating over time. Left with no other choice, Jim tore the car down while sourcing a replacement, stock frame while also making the decision to take on a full restoration.

With the car blown apart he also stripped the body and continued his parts search. Time moves quickly and the car sat in the corner of the shop for a number of years. While participating in a 600-mile Tour Nebraska sponsored by the Nebraska Rod & Custom Association (NRCA) one of the stops was at Dynamic Rides located in Kearney. It was there that the couple met with shop owner Randy Lofquist and after seeing the styles and details incorporated into his builds scheduled a meeting to have him evaluate their project. They shared the same values for bringing the car back to life on a new performance chassis with a modern driveline and an updated, contemporary style so a deal was made and the project moved to Lofquist’s shop to get started.

One of the most important components of a new build is its base, and for this Art Morrison Enterprises (AME) was contacted for one of their state-of-the-art C1 Corvette GT Sport chassis. With the frame constructed from 2x4-inch mandrel bent rectangular steel it comes loaded with all the right components, including a Strange Engineering 9-inch Ford housing filled with 3.73:1 gears linked to matching 31-spline axles. The rear was suspended in place by AME’s exclusive triangulated four-bar matched to Strange Engineering adjustable coilover shocks and a beefy 1-inch sway bar. The rear frame was also narrowed 2 inches to accommodate wider rims and tires. Up front it’s all business for vastly improved razor-sharp handling starting with AME’s custom tubular steel upper and lower control arms deftly matched to Wilwood Engineering spindles complemented by matching adjustable coilover shocks and 1-inch sway bar all linked to rack-and-pinion steering from Detroit Speed. To add plenty of improved braking to the mix, a stock dual master pushes fluid through polished stainless lines to Wilwood Engineering 11-inch discs wearing polished and detailed four-piston calipers at each corner. For plenty of style a set of polished Billet Specialties Dagger rims, 18x8 front and 18x10 rear, wear BFGoodrich KDW 2 rubber to link the power to the street.

To add plenty of seamless power to the build Jim contacted Chevrolet Performance for one of their stout crate V-8s. After checking out a multitude of options he selected their SP383ci small-block stroker that comes packed with a speed shop full of go-fast goods churning out 435 hp right out of the box. A fresh cast-iron block with four-bolt mains was packed with a forged steel crank linked to heavy-duty PM steel rods capped with hypereutectic aluminum pistons. A hydraulic roller cam sets the beat while fast-burn aluminum cylinder heads with 62cc chambers generate plenty of power. To deliver the goods, an Edelbrock RPM Air-Gap intake was topped with FAST EZ-EFI 2.0 fuel injection tuned by the team at Dynamic Rides. It sparks to life through an MSD 6AL ignition and dumps spent gasses out of AME headers to a custom 2 1/2-inch stainless exhaust by Dynamic Rides linked to MagnaFlow 14-inch oval mufflers. The entire exhaust was then ceramic coated by Trail Performance in Papillion. Pushing the power rearward, a GM 700-R4 trans was packed with performance by Scott King of Kearney and linked to a custom aluminum driveshaft.

With the body stripped clean, Lofquist mapped out a number of revisions to give the car plenty of newfound personality and got started along with team members Dustin Maxson, Joe Rayford and Aaron Pullmann. To accommodate the wider rear rubber, 3-inch mini tubs were fabricated and installed followed by a custom firewall and inner fenders, smoothed hood underside and latch system. The front of the body was then treated to reworked and tucked bumpers, grille teeth and flush-fit eyebrows along with a filled cowl vent and shaved fuel fill, which was relocated to the driver’s doorjamb. Out back, custom bumpers and tusks were crafted along with filler panels with the final look completed by a recessed license plate area accented by tinted taillights. With all the revisions complete, the team massaged the body to perfection, set the gaps and prepared it for paint. It’s always a special time selecting just the right color to bring your project to life and Mary Ann nailed it with PPG’s Envirobase Deep Red Pearl. The team laid down a decadent coating covering the body with its newfound elegance.

When it came time to focus on the interior, the team started by smoothing the instrument cluster and filling it with custom-designed dials from Classic Instruments, a steering wheel from Billet Specialties to carve the course and a gear selector from Lokar. Vintage Air keeps the temps perfect while a custom console finishes the look. The car then went to Karl Performance in Des Moines, Iowa, where a set of bucket seats from Wise Guys were covered in pleated black Ultraleather along with the door and kick panels, console and dash complemented by charcoal square weave carpeting. The trunk also received matching threads. This is one custom Corvette that personifies perfection at every angle while being able to carve corners and accelerate like a hot rod should … to us that just plain cool!