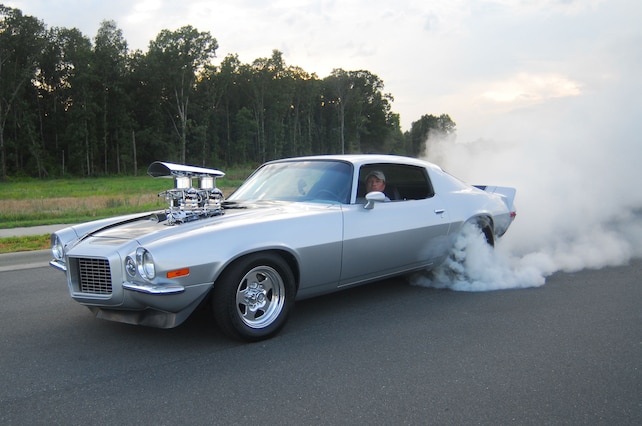 Mike Blackburn has found one way to cut through the cacophony of putt-putt economy cars and work trucks in Monroe, North Carolina. His 1970-1/2 Camaro Z28 demands attention with its Weiand supercharger and custom scoop bursting through the DuPont Sterling Silver and black-striped hood. The split-bumper Camaro is driven weekly to car shows, cruises, and the like—never trailered—and a regular at Super Chevy Shows, Run to the Sun, and the Turkey Run. The 6-71 blower is his sound system, though the 383ci small-block it’s attached to produces some sweet notes of its own. A Comp cam, TRW pistons, Eagle rotating assembly, and World Products heads fortify the SBC for supercharged use. A pair of Holley 770 carbs and Hedman headers are at opposite ends of the engine to match. Kenneth English was responsible for building the powerplant. Meanwhile, Bobby Hinson built the three-speed auto to stand up to it, which is commanded by a B&M shifter and 2,500-stall converter. The rearend is a standard 12-bolt with 3.73 gears.

Mike is a proud father of two, husband, and driver for Interstate Batteries. His friend Mike Batson helped with the build, which has taken three years to complete. An early second-gen lover, Mike has owned a 1971 and 1972 Camaro previously. Now he can check off the ’70 split-bumper from his list, which was a barn find. Residing under a mattress with no engine or trans, he rescued the sad-sack ’70 Camaro and brought it to Sheldon Medlin for the fresh silver paint and Z28 stripes. The smooth firewall, cut hood, and dash outfitted with Auto Meter gauges were all custom. Hotchkis lowering springs provide the appropriate stance for such a powerful machine. And the Pro Street look is completed with a set of 15x7 front and 15x8 rear wheels riding on Kumho 165/80/15 and Nitto 275/60/15 drag radials.