A 1969 Chevrolet Camaro That Defines “Custom”

Full Custom: You will not see the words “simple” or “stock” in this story 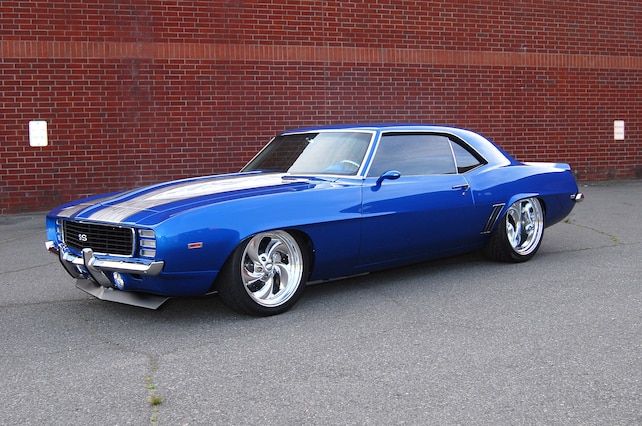 There are many terms that we throw around to define modified classics, such as a ’69 Camaro. Pro Street is basically a show version of a drag car that is meant to be driven on the street. Pro Touring and g-Machine are built for handling, but also very street friendly. Restomod can be similar, but is overall less aggressive and keeps the factory body lines in place—using modern technology to improve performance and comfort. It’s a combination of the words “restored” and “modern.” Of course, your more factory-based modifications might simply be classified as “modified,” whether period correct or not. And when none of those will do, we use the catchall term “custom.” Brian Hall’s 1969 Camaro is custom.

With massive Colorado Custom 20x12 rear wheels with 315/35ZR20 rubber and 18x8 front wheels with 225/45ZR18, it is not drag inspired nor built for handling. It is something else, entirely unique. Nearly every surface of the car is recovered or repainted, similar to what is common to Pro Street, but yet still unique. The powerful 502-cubic-inch Ram Jet crate engine is neither something you’d use in a Pro Street build, nor is it common in Pro Touring. And the 600-watt Alpine sound system with 12-inch subs is yet another feature that defies these other categories. But that is OK. Brian is OK with being different, and so are we. This is the type of car that begs for attention wherever it goes. It has won of Best of Show seven times and taken top awards in every show that it has attended. It is impossible to ignore the amount of work that went into it.

Brian is the owner of a body shop so he was not scared when he saw the carcass of a true Rally Sport in a salvage yard that needed plenty of new sheetmetal. Having owned eight 1969 Camaros, several second-gens, Chevy trucks, a Model A, and too many other cool projects to list here—you could say he had the experience to pull it off, too. The Rock Hill, South Carolina, resident started by welding, smoothing, and molding in the frame. A Fab 9 rear was used as part of a modified four-link rear suspension with 3.73 gears and Air Ride Technology shocks. Tubular control arms were added to the front along with Air Ride shocks to match the rear and an Air Ride sway bar. Aerospace Components 13-inch disc brakes were installed at all four corners. A Flaming River power rack-and-pinion combines with these upgrades to make the ’69 Camaro enjoyable to drive on the street. Backing the Chevrolet Performance 502ci crate engine is a tried and true Turbo 400 three-speed transmission with a B&M 3,200-stall converter.

With the mechanical pieces out of the way, Todd Hall could focus on the bodywork. All the sheetmetal “from the roof to the floor” was replaced. Spies Hecker Intense Blue Pearl was the color of choice, which features multi-layer flames within the silver stripes (courtesy of Ryan Young). LED headlights and sequential taillights are another deviation from the norm. But what really stands out is the 1960 Impala dashboard with one-off Classic Instruments gauges. A custom console meets it and combines with the upper door trim (from Mike’s Custom Cars) to carry the Intense Blue Pearl theme through the interior. The Platinum Grey leather is the perfect complement. The front seats are from a Pontiac Fiero, while the rear is completely custom made from Hot Rod Interiors by Chuck Hannab. The same color palate is carried over to the underside of the car on the front subframe and rearend as well as the engine bay. The car is worth a long look to appreciate all the custom touches.