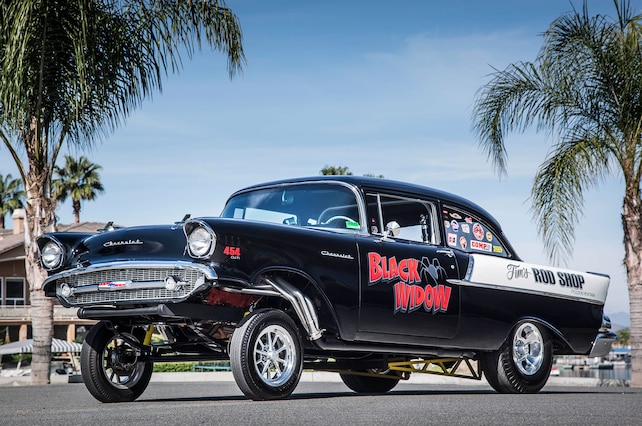 A few issues back we did a feature on Mr. Kelley’s wayward “Wile E. Coyote” 1964 Chevelle (“Get What You Need,” May ’16). It was gasser incarnate. It was all there. It elicited a time that will never be again. Historical cues overflowed, a jacked up nose, stick axle, and headers flashing in the glimmer of the past.

Well, Drake’s at it again, this time with something slightly more iconic, doing what savvy hot rodders do best—getting the most from the least and figuratively kicking ass in the meantime. In short, Kelley knows it’s a better deal to begin with someone else’s solid but perhaps unfinished rendition and carve it to personal taste.

The originator is Tim Arneson (Tim’s Rod Shop) up there in Polson, hard by Flathead Lake in northwestern Montana. Tim dug the Black Widow NASCAR sentiment and wanted to carry that theme, that emotion to the dragstrip straightaway.

Black Widows were built in Atlanta at the Southern Engineering and Development Company (SEDCO) under the auspice of former Hudson racing director Vince Piggins who’d struck a deal with GM boss Ed Cole. Piggins set up camp in Atlanta. The Widows had one-piece frames that were available from the Detroit assembly line but not the one in Atlanta, so all the cars were shipped to Atlanta. All of them were converted to six-lug bolt patterns and wore black and white paint. Production figures do not exist, nor do most of the records kept on them because they weren’t built on a factory assembly line.

Over here in the 21st century: “Tim had found the car on Craigslist,” said Kelley. “It was a complete basket case with most of the hardware and trim dismantled and sitting in the trunk.” Tim did most of the reconstruction (paint, frame fabrication, and engine assembly) and finished the body-off exercise in roughly 12 months. Tim replaced or refurbished a universe of nuts and bolts. Tim finished the work in late 2013 and promptly shopped it around the major Northwest shows, winning an Award of Excellence at Goodguys Spokane in 2014.

At this point, according to Kelley, the car was about 80 percent complete and the show season was winding down when Tim stuck it in the back of the garage and put a tarp over it. Time slithered. Time slid. The Widow simmered for a year.

Somehow, Kelley had heard about the Widow and tracked Tim down. Through conversations, “we both agreed that the car belonged in Southern California. He hadn’t built it to be a driver and was excited to hear my plans on getting the car on the road.”

Kelley’s goal was to drive it. Frequently. On long freeway trips. His first inclination was to visit Tim Lee at Don Lee Auto Service in Rancho Cucamonga to swap the Dana 60 cogs from a jammin’ four-five-six to a more relaxed 3.55:1. Concurrent, he couldn’t resist pulling the rest of the thing apart: front suspension, calipers, master cylinder, etc. He had all of it, including the framerails, stripped and painted.

Then it was on to LP Racing where Lang Paciulli would work the exhaust system. “Because it was solely a show car, the exhaust had only been open headers. I drew up my design and had Lang modify the headers and fabricate the full 3.5-inch system that dumps into DynoMax mufflers before exiting in front of the rear tires,” the 30-year-old Kelley offered. Lang removed the “for looks” rollcage and positioned a real ’cage from 1.5-inch OD chrome-moly.

“Given that I have a 2-year-old son and the potential for a sibling over the next couple of years, I wanted to make the car truly useable for our family while retaining the vintage look,” said Kelley. “The systems allows for two car seats to be held side-by-side or room for a single car seat and an ice chest for those days at car shows.

“Since its completion, I’ve driven the car several hundred miles, including Friday 100-mile round trips to work and back. I think my favorite part about the car is the conversation it starts. I love getting the opportunity to meet and talk to new people. I’m a gasser fan for life and see my family enjoying this car for many years to come.”

What’s it like to drive? Does Kelley need a periscope to see beyond the hood?

Kelley: “There are two separate reactions that frequently occur while out on the road. The first is from the guy who knows what he is looking at and loves that fact [and] that I am actually out driving the car on the road. The second is from the person who has no idea what they are looking at and is confused and a little scared at what they are seeing. Either way, the car starts wonderful conversations whenever you stop somewhere.

“As for the experience of physically driving the car, the most unique aspect has to be the stance and running the car down the road with the nose sky high. It has a very different feel when you see nothing but sky going down the highway.”

Super Chevy readers submit their rides for publication in this month's Bow Tie Keepers! Check out this 1957 150 sedan from Dan Buzniak and more! "“When I was 18 I spotted a ’57 Chevy 150 model Black and White in a junk yard. It ran but smoked a lot so I knew the motor would need a rebuild."

Check out Ronnie Staples 1957 Chevy Bel Air 150 which was transformed to a Businessman's Special. Under the hood is a LS2 from a GTO with a T56 six-speed transmission. Only at www.superchevy.com, the official website for Super Chevy Magazine.

This 1957 Chevy 150 Handyman sedan is a pristine example of a restored Tri-Five, and this Classic Chevy gets its power from a dual quad 283 engine - Super Chevy Magazine