The Minimalist: A ’61 Corvette that stands out for what it doesn’t have 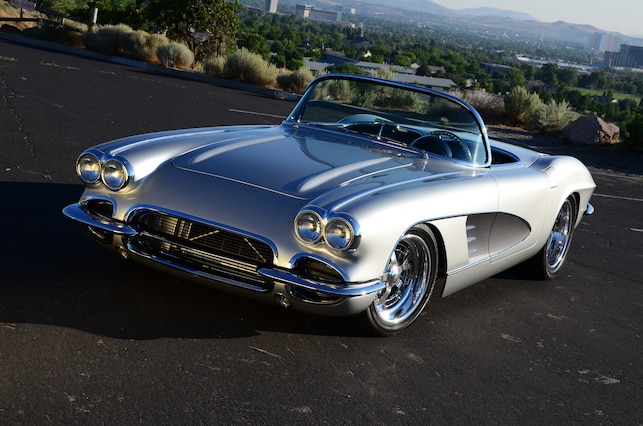 Just what exactly is minimalism? Without getting into a bunch of egghead philosophy, it’s really pretty simple, as implied by the term. According to some self-appointed authorities on the subject, to be a minimalist you can only live with less than 100 things. And you can’t own a house, a television, children and, get this—even a car.

Well, that completely rules out Corvette guys. Except in the case of Rich Stadelhofer’s ’61 roadster, which has a beguiling minimalism to it, a svelte and restrained style. First off, note that it’s actually a true roadster, not a convertible. Ironically enough, what it took for Cotati Speed Shop to do this conversion was fairly complicated. But this seeming contradiction sums up what sets this Vette apart. As Cotati’s Zane Cullen puts it, “It took a strenuous effort to make something look simple.”

Rich purchased the car in 1997 at an auction held during Reno’s Hot August Nights. Mildly hot rodded by its previous owner from Canada, it was in good running condition. After Rich did an initial repaint and general freshening of the car, however, disaster struck. “When I shut off the car in my garage and heard it backfire, I didn’t think much of it,” he recalls. “But the fuel somehow ignited and I came back later and found the car badly burned.”

Rising from a heap of ashes would require a substantial effort, yet Rich was undaunted: “I wanted to make the car even better than before,” he says. Starting with the frame, it was modified in a more traditional configuration, partly because Rich has owned a couple of street rods and favors that approach, and also prefers the simpler, straight-axle Corvettes.

So unlike many restomods, this one doesn’t have the typical chassis upgrade to a later-model Corvette suspension (typically C4 parts). Instead, the frame is basically stock, except for Cotati’s crew cleaning up the welds and reinforcing it with a tubular crossmember. The suspension consists of Mustang II-style fronts (steered manually with a rack-and-pinion), Wilwood brakes and coilovers at all four corners, and a Ford 9-inch rearend. Why no IRS? A couple of reasons.

“We wanted to build a hot rod,” Zane of Cotati Speed Shop says. “I don’t like using a C4 rearend anyway, as it has a positive offset, and I prefer a deeper dish.” So to make room, Cotati did a slight mini-tub, about 2 inches in all, and cut and re-glassed the fenders so they fit flush with the stock width of the frame, rather than overhanging it. This setup allows the rims to be widened to 11 inches in the rear. The wheel diameters measure 17 inches front, 18 rear, wrapped with Dunlop rubber.

Sticking with a live-axle rearend, in a triangulated four-bar system, has some other advantages as well, given that the emphasis was on building a Vette-rod rather than a corner-carver. A straight-axle allows for adjusting the pinion angle for more antisquat and thus a better hookup, and it’s well braced for aggressive handling.

In other words, it makes the most of the 534 horses from the 383 stroker built from a 350 SBC by Rebello Racing. Most of the power gain comes from some careful headwork, as the induction is an old-school setup with an Edelbrock manifold topped by a Holley carb and a custom 14-inch air cleaner. The headers are custom as well, so the engine bay is nicely dressed and cleanly finished, in keeping with the body mods.

A Richmond six-speed transfers the robust power output via a McLeod clutch and Hurst shifter to a steel shaft fabricated by Driveline Services of Santa Rosa, California. The entire setup consists of proven, simple stuff that really works right, as a minimalist would expect.

Ditto for the body, but here’s the tricky part. While it was a fairly straightforward process to smooth out the contours and remove trim, emblems and door handles, the seamless surround for the windshield and door cap moldings proved to be a challenge.

Zane points out that the A-pillars are die-cast metal and notched and other pieces are made of aluminum and stainless steel, each of which looks different. Cotati’s metalworkers found a way to unify these mismatched metals, creating a fluid look that works together with a precise fit and color perspective. A serious amount of custom metal fabrication was required for this clean, elegant look that has a flawless finish throughout. Sherm’s Custom Plating ensured that the chrome stayed consistent on the metalwork.

“Zane has a very, very sharp mind in visualizing how a car should look,” Rich points out. He wouldn’t indulge in any excess or froufrou. To ensure everything was in good working order before completing the project, Rich drove the car in plain gelcoat for about 500 miles. Now convinced that the car had none of the “smokey” issues from before, he had the crew at Cotati apply Spies-Hecker Mercedes Silver paint with charcoal coves.

“I’m a silver guy,” Rich admits, pointing to the similar hue of his other two Corvettes, a 1966 and a 1999, and the color used on his company’s work trucks.

In the cockpit, the trim around the seats had to be cut and modified as well, since the frames are from a 1994 Corvette, and the factory springs were replaced with sculpted foam and covered with leather upholstery by Howdy Ledbetter. Besides sporting a swankier look, the new seats have a functional advantage, as they sit lower in the cockpit.

“Before, I was looking over the top of the windshield frame with the factory seats, and the new ones are much more comfortable,” Rich notes. He really relishes that aspect on sunny, weekend drives to the NorCal coast.

As for the dash, the original gauges were retained, converted from amps to volts, and restored to good working order. A more modern audio system fits right into the top of the console, and a Budnik wheel completes the dash area. Black wool carpeting covers the floorboards.

Looking at the treatment overall, “Achieving the ‘less is more’ effect is the opposite of most rods,” Zane observes. “And it takes the most amount of effort to achieve something so subtle.” Yet this low-key persona attracts a lot of attention, not merely from onlookers, but also from judges that have twice awarded the car “Best of Show” at the Peppermill Resort during Reno’s Hot August Nights.

So all told, what’s wrong with minimalism? Nuthin’ at all. After all, like Rich’s Corvette, it’s a nearly unbreakable tool that helps you find freedom from complexity and worry, freedom from feeling overwhelmed and the trappings of technology. Pretty simple, isn’t it?