From the Archives: 360 HP for Chevy II 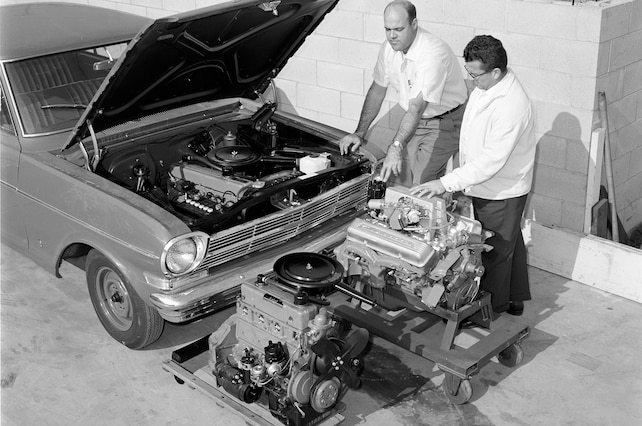 The Chevy II, pushed through Chevrolet’s engineering department in record time to take on Ford’s Falcon in the 1962 model year, was intended as basic, economical transportation. As such, it was initially available with just a 90hp four-cylinder and a 120hp version of the Stovebolt six.

It didn’t take long, though, for folks to figure out that the lightweight little sedan was a great candidate for a V-8 swap. Chevrolet dealers got into the act quickly, offering conversion kits to transplant a small-block into the little grocery getter.

Hot Rod magazine’s technical editor Ray Brock and photographer Eric Rickman spent several days with Chevy performance guru Bill Thomas as he used one of these kits to drop a 360hp fuelie engine into a Chevy II. The full range of Chevy II engine options was visible in Rickman’s opening photo from the magazine’s March 1962 issue, with Brock leaning on the Chevy, Thomas resting his hand on the 327, and the four-banger also-ran basically taking up space (but helping with the photo’s composition).

Two conversion kits were available at the time, one for the standard passenger-car 283 that plumbed the exhaust with a single pipe, and one with dual exhausts for any of the various 327 models. Thomas chose to back up his Vette engine with a Corvette four-speed as well.

Because Thomas was jumping the gun a bit on the conversion (and not waiting for the crate engines Chevrolet designed for the swap), he had to deal with some clearance issues with the clutch linkage and he had to fabricate a new oil pan to clear the steering cross-shaft. Otherwise the swap was pretty straightforward, and Brock was careful to list all the part numbers readers would need to complete the conversion themselves.

Brock figured the conversion—engine, transmission, radiator, dual exhaust, and other pieces—added 185 pounds to the car. New heavier-duty front springs would be available from Chevrolet, though not in time for the story. On the scale, the Chevy II was still a pretty svelte 2,908 pounds, with about 57 percent of its weight over the front wheels.

“With no heavy-duty front springs and the small 6.50x13 tires, we really expected the worst in handling,” Brock wrote, “so we were pleasantly surprised when the car wasn’t too bad at all.” On a twisting canyon road the car was “fairly easy to handle when the proper amount of throttle was blended to the curve. We could offset the understeer caused by the heavier engine with oversteer provided by the extra power. With some chassis preparation and a good driver behind the wheel, The V8-Two could be quite the Grand Touring sedan.”

In a straight line, “acceleration was, of course, fantastic in any and all gears.” Even with the tall 3.08 rearend, “care had to be taken to make easy starts because too much throttle would start both rear tires spinning.” He didn’t make any timed passes at a dragstrip, but acceleration runs saw 0-60 come up in 5.2 seconds and 0-80 in 8.7.

“If you wonder just how these speeds compare with other sedans we’ve checked, our only comment is Wow! That 5.2 seconds from 0 to 60 is over two seconds faster than the previous best time for a sedan with street gearing and even faster than the Corvette.”

Thomas, Brock wrote, believed that “with a little time to work on traction, this car should be near the 120-mph mark in the quarter and dominate the FX class for stock cars at the dragstrip.” Of course, Thomas would spend more than just “a little time” working on Novas that would dominate on the strip. What you see here is the start of a beautiful relationship he had with the little sedan.

Factory conversion kit included dual exhaust, bigger radiator, floor shifter for the four-speed, front sway bar, and heavy-duty brakes. Note the radius rods, on the right side of the photo, that bolt in to help the monoleaf springs fight axlewrap.