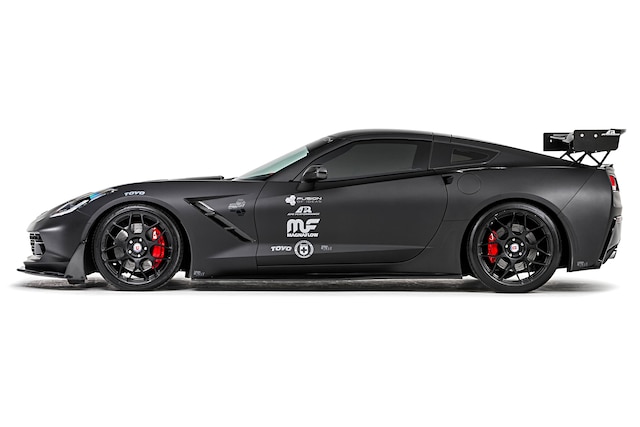 What better father and son experience, short of joining the Boy Scouts, can top a cross-country road trip in a brand-new Corvette? One will not find us using a lot of words to describe all of the modifications made to separate Russ Taylor’s early 2014 C7 Z51 Corvette Stingray from a stock model because right out of the box a C7 Corvette is darn near race ready. The legacy of the C7 Corvette’s breeding as a race car begins with its aluminum chassis. An absolutely amazing engineering feat, the standard C7 chassis is strong enough—without modifications—for fitment into the base model Corvette, past the Z06 coupe and Z06 convertible and into the all-out competition C7.R.

Russ believes his 2014 C7 Z51 Corvette Stingray was the first of its kind in California, he and his dad flew to Coughlin Corvette in Pataskala, Ohio, and picked up the Z51 he ordered from Rick “Corvette” Conti, and headed straight to Indy where he was able to give his new Stingray a taste of the bricks. Russ stated, “It’s no wonder they call Rick, “Corvette” Conti. He’s the best Corvette salesman around.”

One might call Russ’ intentions for his Z51 to be a combination of the ultimate street brawler mixed with a weekend warrior track car. At the end of the road trip Russ’ bifold master plan was to prepare the 2014 Stingray to run in the 2015 Targa Trophy Road Rally, and through his company, Fusion of Ideas, take the event from pencil and paper to using an iPad. Russ explained, “The Fusion of Ideas iOS application provides the digital experience for Targa Trophy. Through the application users can see all the route instructions, interact with other drivers through a closed circuit communication process, track other vehicle locations in relation to position and time and contains all of the event details for the drivers. The application has truly revolutionized the event.”

To prepare the Corvette for the banzai run through numerous southwest states on the 2015 Targa Trophy and the many track events to follow, Russ delivered the Z51 to Ryne Cunningham at Cunningham Motorsports (CMS) in Murrieta, California, to do a few engine performance upgrades and improve the cooling, suspension and brakes. Under the hood where the stock 6.2-liter LT1 puts out SAE-certified ratings of 455 horsepower at the flywheel at 5,900 rpm and 460 lb-ft of torque at 4,700 rpm for the base engine, or 460 horsepower at 4,700 rpm with the RPO NPP Dual-Mode Performance Exhaust, Cunningham boosted the intake and improved exhaust flow. The boost—7 psi of it—comes from a ProCharger P-1SC-1 Cunningham installed along with its proprietary ground CMS custom cam kit, along with a complete exhaust system CMS sells. A pair of American Racing headers evacuates spent gases through 3-inch pipes with a 3-inch X-pipe into a pair of MagnaFlow stainless steel mufflers. The end results after Cunningham’s tuner entered the perfect tweaks produced 591 rear-wheel horsepower at 6,000 rpm and 538 lb-ft of torque at 5,000 rpm. Cunningham installed a Ron Davis radiator to keep the blown LT1 running cool, and Russ reported that it really works. The manual transmission is a stock, factory spec seven-speed with a stock, factory spec clutch and pressure plate; the stock Z51 drivetrain handles the extra horsepower without a complaint.

The key to making a Corvette quicker for street or track use is to make it stop and stick better. The brake rotors and pads Russ had CMS install were DBA (Disc Brakes Australia) 4000 series T3 rotors with Carbotech AX6 pads. The next trick is to decrease unsprung weight and mount sticky tires that don’t flex or squirm. Up front, 19-inch HRE model P40SC—ultra-light and airy for brake cooling—wheels are shod with sticky 245/35/19 Toyo Proxes tires. In the rear the HRE’s hoop size gained an inch and 285/30/20 Toyo Proxes are in service. The ride height has been dropped almost 2 inches and KW Variant 3 shock absorbers with Ride Select capabilities are used to damp bumps and sublimate road surface irregularities.

Russ checked Black for the body color when he ordered the Z51, but as soon as he got home to California, Fusion of Ideas wrapped the exterior in matte black with its proprietary Stealtharmor film, and then lettered sponsor logos in film. Russ stated, “The carbon-fiber aerodynamic kit from APR Performance in Walnut, California, were expertly installed by KC, the carbon-fiber components give the Z51 a similar appearance to the C7.R Corvette race car.” As with every upgrade undertaken during the two months it took to prep Russ’ Z51 for the Targa Trophy it didn’t take all that much to bring the interior in line. In fact, checking the box for 3LT Adrenaline Red Leather was all it took.

Since running the 2015 Targa Trophy MegaRun with his best friend Tyler, Russ has been bitten by the track-your-Corvette bug bad. Russ told Vette, “We had one of the fastest cars in the 2015 Targa Trophy MegaRun and it felt great to dominate McLarens, Porsches, Ferraris, and other makes. Maybe I’ll commit the Z51 to being a full track car; gutted and ’caged to compete in NASA” (National Auto Sport Association).