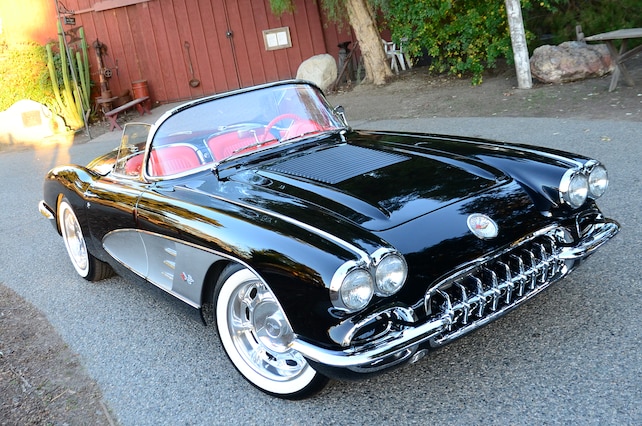 It takes a special kind of person to man the cockpit controls of the “heavies.” That is, commercial aircraft exceeding 300,000 pounds, such as a 747 or DC-10. Especially when you’re on long-haul flights over the South Pacific. That’s the kind of serious duty Rod Dyck handled for decades, flying for Singapore Airlines.

So what kind of Corvette do you think he’d go for? Maybe the latest C7 Stingray? Or even a jet-powered Funny Car? No, what he went for was an old dog that had to be taught a few new tricks. That’s because this story goes back to when he was a kid drawing pictures of the 1958-’62 models, favoring in particular the 1958 Corvette. So many Corvette owners started out in a similar way, but why this particular model year?

“I just really like the first year of the bigger body,” Rod says. “Especially the shape of the trunk irons.” Those big strips of chrome really set off the rear deck nicely, giving it a classy treatment that you just don’t see anymore. Of course, the trim pieces weren’t the only items that caught Rod’s eye. But he also knew what he was getting into with an older car with a cramped cockpit and a big “Armstrong” steering wheel. What a difference from the flight deck of a jumbo jet!

On those long flights overseas, when the plane was on cruise control or his co-pilot took over the helm for a time, he couldn’t help thinking about the car he longed for in his childhood. So on layovers he would surf the Internet, scouring for deals on classic Corvettes. Two years later, he finally came across a 1958 located in Turtle Creek, Pennsylvania, being offered by a used-car dealer at a rock-bottom price.

Powered by a 283ci with a four-speed, the red-on-red car was only in fair condition, as the undercarriage was bent from bottoming out (what Rod would call a hard landing). No matter, “I was really after the body,” he notes. “I made sure it was repairable, and it had just some cracks in the fenders and slight collision damage in the rear.” (The latter issue, however, would later expose a funky past repair, as we’ll see.)

Pointing to the work that needed to be done on the car, Rod was able to talk the dealer down another $1,000 to the low $40s, and then had it shipped to his home in Ontario, Canada. While letting it languish for several months, he came across a few Corvettes restored by Mike Filion of Pro Design Hot Rods in Santa Ana, California. Impressed by his workmanship, Rod sent the car to his shop in SoCal for a complete rework, which would ultimately take about three and a half years.

After Filion removed the body, he sold off the frame, engine and hardtop for Rod to help defray buildup expenses. An essential item was new “landing gear”: an Art Morrison chassis fitted with a Corvette C4 suspension and front brakes, plus a rack-and-pinion system and Wilwood rear stoppers.

While resurfacing the body with Evercoat (not Bondo, of course, since that’s for metal bodies), Filion discovered an older, surprising repair to a hole in the back. Apparently, a shop rag had been stuffed inside the body, behind the fiberglass patch, to hold it in place while curing. Of course, Filion made it right, but it was a shock to see how that was handled on such a valuable car. Fortunately, he didn’t come across anything else like that during the repair and prep phase. (But there were a few more challenges to overcome along the way in other areas.)

Rod expects a lot of power in whatever vehicle or aircraft he’s piloting, so to give the car a quicker takeoff, he had Filion drop in a GM LS2 from Street & Performance, topped by a custom air intake fabricated by Pro Design, and an intercooled Magnuson supercharger. Expelling the exhaust are Patriot headers and 2 1/2-inch dual pipes that flow through Mesa mufflers. Force-fed about 6-8 psi, the LS2 delivers 100 more horses, 520 hp in all. A six-speed TREMEC transfers power to the 4.11 Posi via a Drivelines shaft for a sure-footed launch. The only hitch in setting up the drivetrain was relocating the engine mounts, but it otherwise came together fine.

The chassis rolls on 17x8 rims from Evod Industries, wrapped with Diamondback wide whitewalls on Michelin radials, and dressed with 1959 Corvette hubcaps with windows.

As for repainting the originally red body, Rod went with a classic ebony hue, a House of Kolor Jet Black, accented by silver coves that complement those trunk trim pieces that he’s so enamored with. Another snag in the buildup was that the painter somehow disappeared into thin air, so Filion had a long-time vendor, Star Side Design, step in and complete the body finish.

Instead of avionic-style gauges, he had the original factory units restored by United Speedometer. Vintage Air supplied a compact heater and A/C unit, and Al Knoch Interiors covered the seats with pilot-grade red upholstery. Overcoming the deep, throaty exhaust note when launching the car is an Alpine head unit, amp and speakers. The electronic control unit is mounted between the seatbacks.

All told, Rod’s Corvette sketches that he drew as a kid finally became a satisfying reality. The car now lives near Vancouver, British Columbia, and when he’s not in the air, he’s just as happy to be piloting his high-flyin’ Corvette.