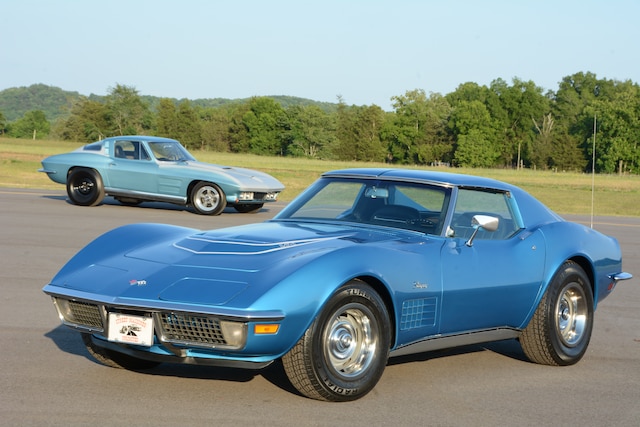 As Corvette enthusiasts, we all have a moment that defined our love affair with America’s favorite sports car, or fast cars in general. For many folks in the small town of Dayton, Tennessee, that defining moment came courtesy of Freddy Best, a man who leaves an impression on everyone he meets. In the ’60s and ’70s, it was his cars that got everyone’s attention—first with a 1957 Corvette, then a 1964 Corvette coupe and later a 1971 Corvette coupe. He was known for his wild driving antics and giving exhilarating rides to whoever was willing to slide into the passenger seat. Two of the three Corvettes still survive in Freddy’s hometown, and they’re still blasting around the same roads they were so many years ago.

The current owners are accustomed to hearing, “is that Freddy’s old car?” any time they stop at a gas station or attend a local car show. Everyone of a certain age knows and remembers both cars by their previous owner, and they might even have their own story about riding shotgun in these two Vettes. Even though neither car is particularly rare, or built by the NCRS book, both cars have a great story and a lot of charm. The 1971 Corvette has recently undergone a restoration, while the 1964 is a little rough around the edges with a rowdy small-block under the hood and plenty of imperfections. Let’s dig a little deeper into the history of these two cars, and see what makes them local legends.

Freddy’s history with this car goes back to day one. He bought it new at Brown Chevrolet in Dayton, Tennessee, in 1970. He ordered it in Mulsanne Blue and black vinyl interior, with a 350ci LT-1 engine and four-speed manual transmission. When the car arrived on the transporter, Freddy was there to back it off the trailer, and he didn’t waste any time enjoying the car. Compared to his previous two Corvettes, it was relatively high-geared, so the 330-horsepower small-block could provide a little more top speed. The wider tires and refined suspension only aided Freddy’s tendency to drive a little too fast around corners.

Even though Freddy had modified his previous two Corvettes, the 1971 stayed close to stock for many years. He installed side pipes and a fiberglass rear leaf spring to give it a little more style and performance, but eventually went back to a standard exhaust setup. Freddy was never the type to worry about his cars—he would sometimes let other people drive them. It was ultimately his wild driving behavior that led to wild rides, crashes and near misses. While the other cars saw more abuse, the 1971 had a little road rash, but the only major damage was on the passenger-side quarter-panel. Troy Byrd repaired the fiberglass and repainted the whole car in 1985. You’ll see Troy’s name pop up again later on.

After the repaint the car was back in action, but in the grand scheme of things it didn’t rack up too many miles during the time that Freddy owned it. He occasionally drove it, but it mostly stayed in his garage. Close friend and car guy, “Fly” Runyan had an interest in the car and pestered Freddy until he finally caved in and him sold the car. Fly drove it often, while making small repairs here and there, but aged paint and a rough-running engine prompted him to give the old girl some much-needed attention.

The original LT-1 was rebuilt with a few aftermarket pieces, such as an Edelbrock Performer intake and a Holley four-barrel carburetor. The ignition was updated to an HEI distributor, and Fly stayed with the tried and true combination of long-tube headers and 2 1/2-inch exhaust for the perfect exhaust note. During the car’s most recent rebuild, Fly had a lot of motivation from his wife, Debbie, to spruce up the engine bay with polished aluminum and chrome-plated accessories to bring the LT-1 to life. In fact, Debbie was one of the biggest motivating factors in the car’s rebuild, and she has driven the car more than Fly in recent years.

Troy Byrd once again was the man for the job for this car’s bodywork and paint, but this go-round he had help from Wally Smith. They removed the previous layers of paint and freshened a few of the fiberglass repairs that had been made more than 30 years ago. From there it was a matter of straightening the body, finessing the panel fitment, and applying the urethane base/clear paint in the original hue. Inside, the car still has most of its original equipment, as it was kept in great shape through the years. The only aftermarket accessories are the floor mats and the radio, while the rest of the interior has either been well preserved or replaced with authentic restoration parts.

The car drives nicely thanks to 225/70R15 radials up front with slightly larger 235/70R15 rear tires, mounted to the original 15x8 Rallye wheels. The four-wheel disc brakes are in good working order, and the manual steering is as responsive as ever. Fly and Debbie drive the car often, and even though it’s only showing 70,000 miles on the odometer it’s never a shock to see this car on its way to a local car show or cruise-in. They continue to enjoy the car for its style, performance and local history, and the newly refurbished appearance certainly helps them stand back and be proud of this hometown hero.

While Freddy didn’t buy this 1964 Corvette off the showroom floor, he spent quite a few years with it. The car started life in Lawrenceburg, Indiana, purchased at Ande Chevrolet Olds. Wilbert Leisring was the original owner, taking delivery of the Silver Blue Metallic coupe on June 1, 1964. He ordered it with the L76 engine, a 327ci small-block producing 365 horsepower, and also elected for the close-ratio four-speed (Muncie M21), but he didn’t check any boxes for creature comforts like power steering, power brakes or air conditioning. Only six months and 1,608 miles later, John Barlow became the second owner of the car, owning it until the transistor ignition system failed and left him stranded at a friend’s house. That friend is Freddy Best, who would ultimately buy the car in 1966.

Freddy drove the car throughout the ’60s, abusing the solid-lift 327 with high-speed runs up and down Dayton Mountain. The car took quite a beating, and had a few accidents through the years. The worst was a late-night run up the mountain when the road was iced over, which sent the Corvette sliding off the road. The crash destroyed the front of the body, including the headlight assemblies, inner supports and a lot of fiberglass. It hit hard enough to bend the frame, which was usually reason enough to scrap a car during that era. Thankfully, he held onto it, but the car went on the back burner, as it sat for nearly 15 years. Fast-forward to 1985 and Freddy got the itch to get his 1964 back on the road, so he took it to Troy Byrd, the same fellow who repaired and painted the 1971.

In addition to the crash damage, the engine was due for a rebuild, and the seats had seen the effects of 15 years of neglect, so the ’80s rebuild was a little more than just a repaint. Jim Conner built a new 350ci engine, and Freddy bought a B&M supercharger to boost the horsepower of his small-block.

After battling overheating issues, Freddy started to lose interest in the car, and eventually decided to sell it. During the rebuild process, Troy told Freddy that if he ever decided to sell the car that he’d like to have the first shot at it, and Freddy gave him a price that he couldn’t pass up. Troy decided early on that he would hand this car down to his son, who was still in diapers at the time of the purchase. After a few changes to the car’s appearance, and many opportunities to sell it for a great profit, Troy stuck to his word and handed over the keys when his boy turned 16. What he didn’t immediately realize is that the Corvette shaped his son’s love for old cars, and provided a bunch of great memories in the years before he handed it over. It was always treasured, and always respected, despite the countless beatings the car has taken up and down the roads of Dayton, Tennessee. The car had 60,000 hard miles on it when Freddy sold it to Troy, and currently has 73,480 miles (at the time of the photo shoot).

These days, the car has taken on a new personality, with the nostalgic appearance of an early ’70’s street racer, and it still gets regular beatings. Under the hood is a ’68 model 327ci small-block that features Dart 200cc Pro1 cylinder heads with a hydraulic roller camshaft and a host of valvetrain accessories from Comp Cams. Behind the small-block is a Zoom clutch, contained by a Lakewood blow-proof bellhousing, which bolts up to a TREMEC TKO-600 five-speed transmission. Out back, the original rearend and 4.11:1 gears have somehow survived more than 50 years of abuse. Up front, the car rolls on 15x4.5 Torq-Thrust D wheels, with 165R15 front runner tires, while the rears are 15x6 steelies mounted to M&H 9.00-15 slicks from Coker Tire. What’s left of the blue paint is DuPont Imron “Medium Blue” that Troy applied more than 30 years ago, but the aging materials have been repaired and spotted in with gray primer. The car has a lot of attitude and character, but people still recognize it as “Freddy’s car” or “Troy’s car” despite its various looks through the years.

You’re probably thinking, “Wow, a 16-year-old kid with a hot rod Corvette … must be nice!” That 16-year-old kid was yours truly, and you’d be correct in assuming that I wasn’t ready to drive a low-geared Corvette with a supercharged small-block, manual drum brakes and a sloppy shifter that got hung between gears at the drop of a hat. It took me awhile to learn the car, because it obviously wasn’t a daily driver. I’ve spent the last decade or so making it a little more practical on the highway, but I’ve neglected the bodywork in the process. After seeing Fly’s beautifully restored 1971 Corvette, it’s given me the motivation to straighten up the old fiberglass and make it all one color again. For now, the primer spots will have to do, and I’ll continue thrashing on this old hot rod, just like Freddy and my dad did for so many years.