A Custom 1959 Corvette That Isn’t What You Think

Not Of This World 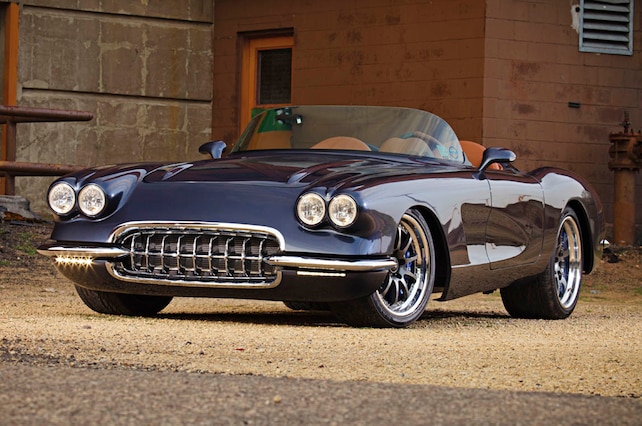 There are a number of distinct groups within the Corvette world. One faction prides itself on retaining the showroom-fresh Corvette status by making no changes to the platform, insisting that Chevrolet built the perfect performance car. Then there’s another large group who waits nary a minute after taking delivery before beginning the modification list to turn the Corvette into its personal vision of automotive excellence, using the Chevrolet platform as a blank canvas awaiting artistry.

And then you have a third group, headed by people like Gumer Alvero, who want to build a first-generation Corvette equipped with modern performance capabilities. Thankfully for Alvero, as the older C1 and C2 Corvettes have come into vogue with the large array of Corvette customizers scattered throughout this great land, all of the parts and pieces to build the ultimate Corvette exist—without purchasing a Chevrolet-produced body or chassis.

Alvero visited with the team at AutoKraft Race Cars & Restoration in Eau Claire, Wisconsin, where AutoKraft’s owner Kurt Anderson pointed him in the direction of an aftermarket 1959 Vette body from Downs Manufacturing. Since Alvero had visions of big rear tires underneath his as-yet-unbuilt Corvette, Anderson suggested this body due to one specific feature. “It came with the mini-tubs already molded into it, so that was a big help right there,” says Anderson.

In order to take advantage of the larger wheeltubs, Anderson made an interesting—and wildly successful—choice to set the Vette up with a frame crafted from the best parts two different aftermarket manufacturers have to offer. “It’s got a Downs back half on it, with Art Morrison’s framerails and front half,” he says. “When you buy the chassis from Downs, they buy the ’rails and stuff from Art Morrison, then they cut that back-half off and put their own back-half on. That allows builders like us to put a bigger back tire on.”

The Art Morrison frame system makes use of well-sorted-out Mustang II front spindles and Art Morrison tubular A-arms. There are antiroll bars at both ends of the chassis, with AFCO double-adjustable shocks at all four corners. Under the Downs rear frame section sits another interesting choice—a 9-inch Ford solid rear axle sporting a set of 3.73:1 cogs.

This custom frame also has provisions for the use of a contemporary engine and transmission package to provide Alvero with excellent reliability. The LS3 crate engine was built by Street Rod Engines in Rowlett, Texas, and uses many stock, proven LS3 components in conjunction with select aftermarket pieces. The 376-cube LS3 exhausts through a set of modified Art Morrison headers and Dynomax mufflers in a custom 2.5-inch configuration. On the dyno, the engine twists the needle to 550 horsepower and 520 lb-ft of torque at the flywheel. The Hurst-shifted transmission is a tried-and-true Magnum six-speed from TREMEC, backed up by a GM LS7 clutch assembly.

The braking system was surprisingly easy to develop. They turned to C6 Corvette four-wheel disc brakes, then added a Wilwood master cylinder and pedals for ease of use. And the car rolls on an exquisite set of Forgeline ZX3S billet aluminum three-piece wheels measuring 18x10 in the front and 19x12 in the rear, wrapped in 275/35/18 front and steamroller-sized 325/35/19 ultra-high-performance tires in the rear.

With the drivetrain and rolling stock out of the way, the AutoKraft team turned their attention to the body structure, determined to give it a one-off treatment to help this Vette stand out from the crowd. As one of the leading Corvette customizers in the land, Anderson didn’t hesitate to plan other modifications to really set this Corvette apart from the pack. Since the Downs body was already modified from a stock Vette tub, he didn’t have any qualms about taking it to yet another level by molding a set of headrests into the body lines. “You notice how the body is ‘humped up’ behind the seats, like a C5 or C6 Corvette,” he says. “I found a C6 rear decklid on eBay, and I cut that up and made a mold out of it, then grafted it onto the ’59 body to give it more of a sleeker look, as opposed to just being flat.”

After adding the headrests into the car’s profile, Anderson also took it upon himself to cover the convertible top area over with fiberglass to give the car more of a roadster-style appearance. It now holds more of a similar visual appearance to the original 1953-’55 Corvette than it does to the stock 1959 body lines.

He didn’t stop there—the windshield was trimmed and laid down for a new profile, while the area around the cowl was also modified. Traditional hot rod tricks like smoothed-in headlights and frenched taillights were applied, while custom carbon-fiber inlays were set into the side coves, and custom-fabricated rear bumpers were designed. A sweet set of five-cell LED lights were designed and set into the nose under the front bumpers on each side.

And in the rear, perhaps the most interesting choice in the whole build was the incorporation of a pair of Bentley exhaust tips that were adapted to the Corvette body—a challenge that actually wasn’t much of one, according to Anderson. “The natural curve on the ’59 body matches the curve of those Bentley exhaust tips,” he says. “They have the exact same contour as the Corvette body, so they worked perfect in there. We saw them on eBay, and I ordered them up just to try them. I couldn’t believe it—after I’d hogged out the holes I slid them in there and said, ‘You’ve got to be kidding me!’ It was like they were made for it, and they worked out pretty slick.”

The custom touches continued inside the car, as Steve Pearson and Upholstery Unlimited constructed tan leather custom seating surfaces, a center console, and matching door panels. A complete Alpine/Polk Audio sound system was installed, while a full set of carbon-fiber gauges from New Vintage USA help Alvero to keep tabs on the Vette’s vitals. Don’t think this Corvette is all show and no go, however. It was autocrossed at its very first outing at the Goodguys Nationals in Columbus, Ohio.

Anderson says, “It’s like driving a new Vette. Because of the sway bars it goes around a corner so flat that it just doesn’t roll. The car doesn’t weigh much, so it’s not like you’re tossing around a 4,000-pound car when you’re going around the autocross course. It’s pretty light. It’s like an oversized go-kart. It’s a lot of fun to drive, that’s for sure!”

This customized Corvette—while it’s not up to the all-stock, unmolested standard of a Corvette purist—is certainly a dream performance machine. Big power, light weight, great handling. After all, isn’t that the Corvette premise?