From the Archives: A Shark in Riverside 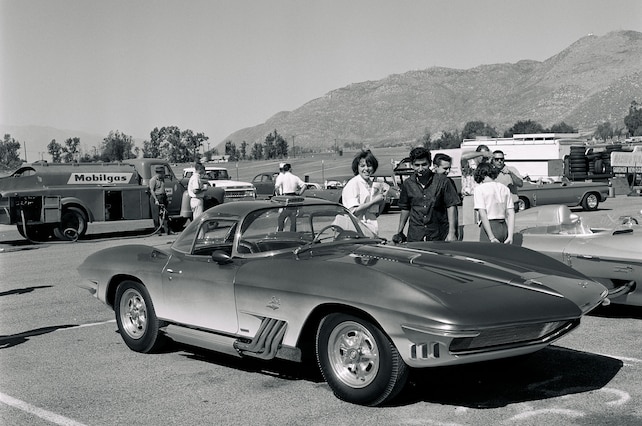 There were Corvettes in the race, but Chevrolet made an even bigger splash at the event by bringing several of its concept sports cars for a trackside display, including the recently finished Shark.

Commissioned by GM’s styling chief Bill Mitchell and penned by Larry Shinoda, the Shark (code named XP-755) offered a preview of what the sharp-edged second-generation Corvette—still two years away—would look like. This is the car that Mitchell famously demanded be painted in a blue-to-white fade to match a Mako shark he had caught in the Bahamas and displayed in his office. Legend has it that the fish’s coloration was so hard to mimic that painters from the styling studio got into Mitchell’s office and repainted the shark on the wall to match the car. Mitchell, apparently, never caught on.

The Shark was a driver, powered by a supercharged 327 V-8 that was fitted with exposed exhaust headers that fed large mufflers running under the doors. At Riverside, the Shark was shod with Halibrand wheels; it also wore wire wheels at various times in its life.

Other photos from this event shot by Petersen lensman Eric Rickman show the Shark parked next to another of Mitchell’s pet projects, the 1959 Stingray racer, with the Corvair Sebring Spyder nearby.

Badges on the car’s fender read simply, “Shark,” as this car wouldn’t come to be known as the Mako Shark until 1965. That’s when another of Shinoda’s Vette prototypes, foreshadowing the upcoming C3, was called the Mako Shark. At that point the newer car was renamed Mako Shark II, making this one the Mako Shark I.