From the Archives: 30 Years of Open Air Innovation 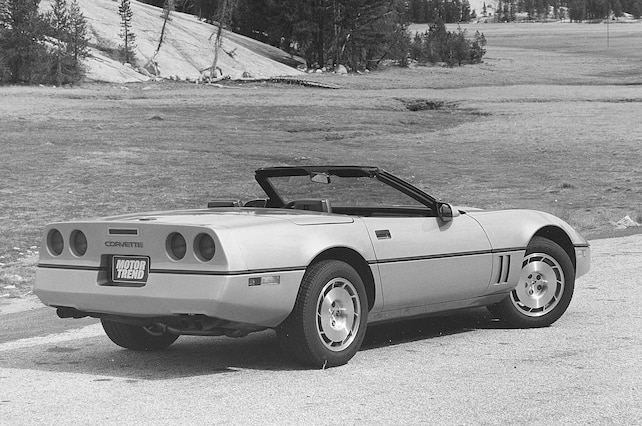 The Corvette began its life in 1953 as a no-compromises roadster, with a manually folding roof and side curtains instead of roll-up windows. It wasn’t until the Vette’s first makeover for 1956 that you could get a removable hardtop as a factory option. Roll-up windows, too, were added to the ’56 model, bringing the car’s amenities a little closer to its Thunderbird rival.

Drop-top versions would remain in the Vette lineup until 1975, when the “last” convertible Corvettes came out of St. Louis. GM stopped producing convertibles of all kinds in the mid 1970s, due in part to pending changes to federal rollover safety standards. But there was another reason, too, one having more to do with dollars and cents than the new rules. Sales of convertibles of all kinds—Corvettes included—fell sharply from the late 1960s to the mid 1970s, and it’s likely the bean counters at GM couldn’t make a case for funding significant engineering changes to a segment that represented such a small portion of overall sales.

That 1975 model year was significant not only for the end of convertible production. It also marked a changing of the guard at Chevrolet, the year when Dave McLellan took over as Corvette’s chief engineer from the retiring Zora Arkus-Duntov. According to Gary Witzenburg, writing in the Feb. 1986 issue of Motor Trend, McLellan and his wife made a memorable trip to Yosemite in 1975, driving a Vette convertible. They so enjoyed the panoramic views of the park through the car’s open roof that McLellan was inspired to someday bring the drop-top option back.

Soon after the 1984 launch of the C4, Heinz Prechter of ASC showed McLellan a convertible Corvette concept, and it wasn’t long before prototypes were driving around the GM Proving Grounds. Production of convertible Corvettes resumed for the 1986 model year, with ASC-made tops and frames incorporated into assembly at Bowling Green.

McLellan revisited that memorable Yosemite trip in late 1985, this time with journalists (including Witzenburg) driving several examples of the new convertible, plus a couple of Corvette coupes, and a Mercedes 380SL and Porsche Cabriolet for comparison.

“The weather was bright, beautiful, and unseasonably warm,” wrote Witzenburg. “And the Corvette convertibles were near-perfect.” In fact, he felt the car’s structural stiffness was “actually better than the coupe’s.”

Extensive reinforcement went into the Vette to make up for the loss of its rigid roof. Then Corvette engineers had to find ways to lighten the car to compensate for the added weight of the extra bracing. One side benefit: “Roadsters will be the first to get the new aluminum heads (with larger intake ports and a higher 9.5:1 compression ratio), which didn’t quite make ’86 production start-up last summer.” Air pressure in the Goodyear Gatorbacks was dropped from 32 psi to 30 “to improve their bump-eating abilities,” but the Vette’s “outstanding road-holding is maintained,” Witzenburg wrote.

“Only those who’ve experienced one could know how absolutely, terribly, frighteningly seductive this new Corvette convertible really is,” he said in his conclusion. “Next to it, the coveted Mercedes 380 ($44,000) and Porsche 911 ($37,000) roadsters are overrated antiques…. The reincarnated roadster version (at about $32,000) is easily the finest driving open car money can buy.”

Models demonstrate the factory’s new removable hardtop for the 1956 Corvette.