Roll Model: Car as catalyst is an alternative take on Pro Street 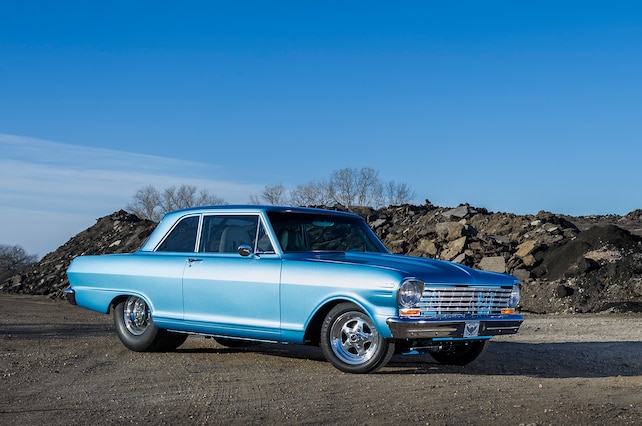 These features you read in Chevy High Performance are not really about the cars. Cars can’t do anything by themselves. They are simply the vessels that bring people together. Some of them are friends. Others are members of the immediate family. Without their hands, their ministrations, the form would never rise, never move, never be celebrated. So when like-minded folks gather to the cause it’s a joyous thing. When family members coalesce around a car, it is a sublime experience that becomes a part of the clan’s legacy forever.

Out there on the Kansas plains, wagon trains no longer marshal for the long trek west over the Rockies but there is one Pro Street Nova in particular conceived and built by brothers Mike and Darrin Dennett in memory of their father.

Dad finds this car in eastern Kansas; it’s pretty rough but mostly complete. It has rust under the hood and on the lower fenders. Dad wants it for Mike’s son, wants to build a “school car” for the kid. The kid’s only three. There will be plenty of time.

Mike talks with several Chevy II veterans who encourage him to eliminate the factory sheetmetal front clip and incorporate aftermarket steering and brakes. The plan then is a mild 350, Powerglide, and a 12-bolt. Mike and Dad complete most of the drivetrain, brakes, and steering and brother Rich has a good start on the body when Dad succumbs after an 11-year shunt with lymphoma. Gloom descends. For 10 years, the car sits in Rich’s shop like a stone monument. The kid doesn’t. He’s doing teenage stuff, riding dirt bikes, slewing go-karts around. Mike sees an opportunity to finish the car in a fashion (Pro Street) that would keep his son’s interest, and his own as well.

Before this all occurs, we say that Mike’s a drag racer at heart, first in a 10-second 1957 Chevy when he’s just out of high school. In the ’80s, he and Pop riff on some late-model dirt cars. In 1994, he steps up and becomes NHRA Div. 5 Super Comp Champion in a Neil & Parks dragster. Mike’s son makes his license runs last November and the Super Comp car becomes his responsibility.

You look at the Nova and immediately you know it isn’t built in a couple of weeks. The Dennett family is at it for eight years before the car rolls on its own. Rich Dennett does all the original bodywork and has it paint-ready moments after Dad passes. Much later, when Mike decides to finish the car, he puts it in the hands of Devlin Rod and Customs in Wichita. They slather the naked carcass in Dynamat. They fill the trim holes, blend the driprails and eliminate the cowl vent, gas cap, and the wipers. They adapt a cowl hood. Devlin also builds the console between the seats and installs the glass after the painting is done.

Somewhere along the line, Mike puts up an eight-point rollcage and then being a hot rodder, he does a whole lot more. He builds a fan shroud and amends it with a stainless steel catch can. He goes beyond the ’cage, tubs, and fuel cell and fabricates the transmission tunnel and installs the Alston clips. “I like anything with wheels, from my first wagon to first bicycle and then dirt bikes. My dad takes me to drag and circle track races when I’m 6, and it hooks me. Engines and mechanical things always come easy to me. When it came to paint and interior I look for help in what I call the ‘arts.’”

Mike gathers up a big bundle of leather, but very few ideas, over to Scott Downey at Downey Interiors in Wichita. Says Mike: “Scott has an incredible eye and a talent to make things flow together. The car has interior details that most people don’t see at first glance, like the sail panel inset that matches the inset on the front fender of a Chevy II and the French double-stitch seam that travels completely around the car from the kick panel to the custom armrest that is perpendicular and tucked to the rollcage door bars, across the package tray, and down the opposite side to the opposite kick panel.” Got that?

Mike finds that the most challenging part of the process is building the rollcage and installing the rear clip and wheeltubs. The unibody construction is more difficult and he confided that in comparison he had no problem doing the same thing to his full-frame ’57. But being challenged is what hot rodding is all about. You solve the problems, maybe alone, but most likely it’s with more than one pair of eyes viewing the same situation. With Mike it is about intimacy, the time he spent in cahoots with his dad in his last years and the time he spent with his maturing son.

In hindsight, he says he’d conceal the master cylinder, Line-Loc, and the heater motor. He’d smooth out the firewall a little more and use plain inner fenders.

Perhaps the most stunning aspect of the Nova is its proportions. Not easy stuffing a 31x18-inch tire under its stubby self like they were born there. Yet the visual arrangement works beautifully, seeming to push the car forward when it’s standing still—taut, powerful, and intimidating. Got it done, Dad.