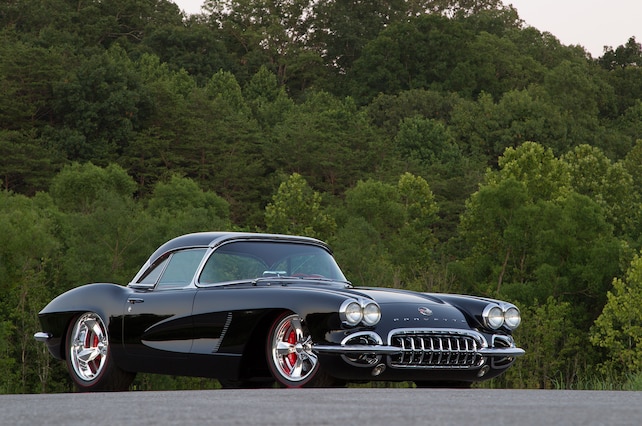 There were 14,531 Corvettes built for the 1962 model year, but it’s unknown just how many came factory black. The year 1961 saw 1,340 Corvettes roll off the St Louis, Missouri, assembly line in Tuxedo Black, but somehow only the production numbers for Fawn Beige and Almond Beige were recorded for 1962.

The 1962 Corvette Bobby Alloway built for his wife, Cindy, was confirmed original Tuxedo Black when the car was split from its chassis and the body flipped upside down on a rotisserie. The inverted view of black acrylic lacquer overspray on hidden areas revealed the car au naturale.

All hot rods and custom cars built by Bobby Alloway’s shop have a signature nose-slammed stance that tucks big meats in front and super big meats in the rear. To set the stance, the ’62 Corvette’s unit body sans stock frame was placed on wood blocks and mocked up with the desired size wheels and tires. From there the dimensions were sent to AME (Art Morrison Enterprises) in Fife, (Tacoma) Washington, where a custom chassis for this first in a line of Alloway Corvettes to follow was fabricated.

Art Morrison does offer a direct bolt-in replacement for 1953-’62 Corvette frames called the Morrison GT Sport chassis, but the large, hooped, deep-dish wheels; extra wide tires and slammed-nose profile Alloway likes require the front framerails to be 4 inches closer together. The 4-inch squeezed front ’rails allow for keeping a tighter turning radius while driving low. The rear ’rails are 2 inches narrower than a standard Morrison GT Sport chassis, yet the rear suspension on the Alloway custom chassis utilizes the same triangulated four-bar with Strange Engineering adjustable coilovers as a GT Sport with a live rear axle. Straight-axle in Vette slang 1962 was the Corvette’s last year for a live rear axle. The Alloway Corvette runs a Currie 9-inch with 4.56 gears and limited slip. The disc brakes at each corner are Baer six-piston calipers with 14-inch slotted rotors breathing behind proprietary Alloway five-spoke mags by Billet Specialties. The front wheels are 17x7 and rear 20x10; all four wheels sport Diamond Back BFG g-Force T/A redline radial tires.

The 1962 Corvette Bobby Alloway found for the basis of Cindy’s car had a cherry body, appearing to have never been hit, with only a minimal amount of fiberglass corrections necessary. The original 1962 hood suffered damage from a carburetor fire that rendered the hood center crisper than a potato chip, and the front valance (lower nose panel) had severe stress cracks, so both were tossed in favor of exact replacements from Sermersheim’s of Evansville, Indiana. A correct 1962 Corvette fiberglass repair consists of using parts in the Ivory color polyester primer found on 1956-’62 Corvettes. Bodyworked and painted entirely in house at Alloway’s shop, Clausen’s Sandy hi-build sprayable polyester plastic filler was sprayed on fiberglass and steel surfaces. The body was tightened down snug to the chassis ensuring all the gaps lined up and then block-sanded until it was perfectly straight.

From here out it was PPG products all the way from the Alloway Black basecoat to the clearcoat. In addition to Alloway’s Scotty Troutman painting the body from top to bottom in PPG Alloway Black, the ultra glossy PPG Alloway Black was sprayed on the smoothed Morison chassis and related parts. Nothing contrasts better against deep gloss black than brilliant chrome parts. Dan’s Polishing in scenic Adamsville, Tennessee, did the triple chrome plating including re-plating the 1959 Corvette grille from Corvette Central to match.

The intricate details to constructing Cindy’s Corvette are concealed from the eye in many instances. There’s not a lot of room behind the dashboard of a 1962 Corvette, but somehow Vintage Air air-conditioning, Kugel Komponents 90-degree brake and clutch pedals with master-cylinders plus a stock ’62 dash cluster full of custom-ordered Classic Instruments gauges were all installed without an outward trace. The Corvette Wonder Bar radio was sawed into a non-working thin façade to clear the A/C ducts. The pedestal-mount gas pedal is a Lokar product. An equal amount of attention to detail was paid to creating more space for the driver to move about. Instead of the behemoth stock steering wheel there’s a super clean shrunken ’62 Corvette steering wheel from Volunteer Vette Products that was smoothed and sprayed with PPG gloss red, and then perched on an ididit tilt steering column.

Additional room was made for driver comfort through the efforts of Knoxville upholsterer Steve Holcomb of Pro Auto Custom Interiors shaving the seat foam on the stock ’62 buckets to gain two more inches of region without modifying the original contour of the seats. Steve stitched red leather to cover the bucket seats and door panels, even the repop dashpad was covered with leather. For sound deadening and retention of hot or cold air, Dynamat was spread throughout before Steve laid red Daytona weave carpeting. A look inside the trunk reveals equal treatment. To seal out rain and wind noise, original replacement rubber weatherstripping from Corvette Central and Volunteer Vette Products was 3M glued in. Two new side windows and windshield were installed to complete a total interior restoration.

The engines in cars built by Alloway’s Hot Rod Shop idle with a distinctive radical cadence that’s thanks to the inimitable cam profiles by Mylon Keasler of Keasler Racing & Machine in Maryville, Tennessee. Not only did Keasler spec the cam Comp Cams custom ground all of the machine work and engine assembly on the 454-inch big-block Chevy was done in Maryville. For induction, a 780-cfm Holley tucks down on a genuine 1970 LS6 Chevelle low-riser aluminum intake manifold; a chromed low-profile Corvette air cleaner completes the act. The source for the polished finned aluminum valve covers was PML of Inglewood, California, and ignition comes from an MSD control box with MSD distributor. For exhaust, the ’62 went to Barillaro Speed Emporium for headers, pipes and mufflers followed with a silver ceramic coating by Gene Mobley at Performance Coatings. A Steve Long of Indianapolis radiator keeps the 454 Rat motor running cool. American Powertrain was the source for the TREMEC TKO 500 five-speed transmission.

Corvettes have been raced, customized, and modified since their introduction in 1953, and when the 265-inch V-8 was introduced in 1955 the floodgates opened. Bobby Alloway isn’t the first guy to customize a Corvette, but since the introduction of Cindy’s 1962 hardtop equipped convertible, and the Alloway’s Hot Rod Shop Corvette creations that followed he has become the best known.