A 1971 Chevrolet Chevelle That Defines Restomod

Plottin’ & Schemin’: A lifetime of car crazy brings together a pristine ’71 Chevelle restomod for practical purists 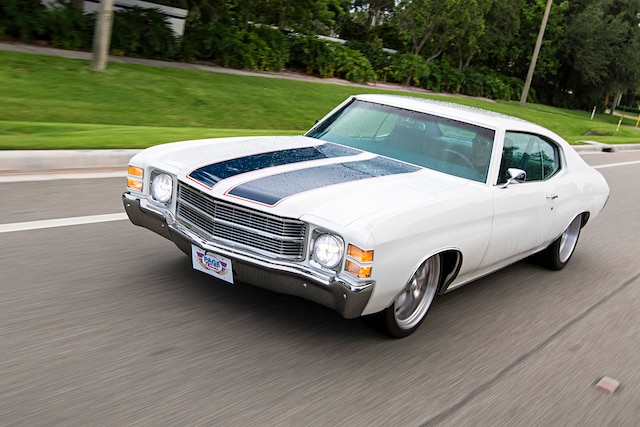 Jimmy Page spent a lifetime in the car business. He worked for his dad and then owned multiple dealerships of his own along the East Coast, before retiring to Boca Raton, Florida. But even in retirement he hasn’t stopped buying and selling cars. One of his friends calls him “the world’s highest paid lot boy.” Jimmy has probably bought and sold more cool cars in a year than most car guys will own in a lifetime. While the majority of his collection includes rare [and expensive] Ferraris and Porsches, GM muscle seems to see the most street time. His daily driver is a boosted fifth-gen Camaro, but this 1971 Chevelle logs plenty of miles as well. In fact, that was his intent when he first purchased it.

“I built this car with the idea that if you wanted to get in it and drive 500 miles you wouldn’t feel like someone beat you to death after you got out of it.” It should come as no surprise then, that Jimmy is a big fan of restomods. In fact, that definition fits him to a “T” because he doesn’t care for the drastically altered bodies that have brought fame to some shops. The exterior, instead, is chock-full of restored original steel, coated with a single-stage urethane paint by Page Customs. Oh, yeah, did I forget to mention? One of Jimmy’s 10 (not a typo) siblings happens to own a restoration shop in Oilville, Virginia. After spotting this ’71 Chevelle on eBay, Jimmy figured this would be the perfect opportunity to show what they could do.

“It was a blue plate California car. For a 1971 vintage to have a blue plate meant that it had been continually registered since new. All the gaps looked like normal GM. It looked like a no-hit, rust-free car and it damn near was. There were just two little [rust] spots near the rear/back window and the left taillight. The hood is original. We just wiped the grilles off the backside of it. It was Richard James’ idea to do a single-stage paint. There are two colors you can get slick with single-stage: white and black—and black was never an option. I think guys get carried away and cars are too shiny. It’s like lipstick on grandma.” The factory ’71 Chevelle hue was complemented by navy stripes with red outlines that were inspired by the Olds 4-4-2.

While the Olds-inspired striping was a nod to his adult past (owning an Oldsmobile dealership), the interior acknowledges his youth as well as the present. GM’s signature “splatter” finish adorns the trunk, just as it did the thousands of Pontiacs he inspected for a spare tire and jack after it came off the truck at his father’s dealership. Meanwhile, the carpet is the same material used in some of Jimmy’s recent Ferrari restorations by Anthony Danis. The Italian-made material is complemented by matching navy Garrett leather and an Alcantara headliner. Bruce Crawford at Hardwood Classics made the custom steering wheel using Aniline dye to give a blue tint to the birdseye maple and ebony. Since this baby was meant to be driven, the front seats are re-covered Corbeau units and the dash is outfitted with custom Auto Meter gauges and Vintage Air. Lizard Skin insulates the interior. Despite the modern upgrades, Jimmy [again] chose a subdued attitude for the interior. “I wanted to leave a ‘trail of bread crumbs.’ I don’t like custom consoles made of wood with leather and carpet in the trunk. I wanted it to be straightforward. I wanted people who are knowledgeable about automobiles to be intrigued and curious. They’d pull on the thread and see what else is there.”

The first clue that this 1971 Chevelle is far from stock are the 19-inch Pro Touring inspired wheels. Budnick Spyder forged wheels are unmistakably aftermarket at 19x9 in the front and a whopping 19x13 in the rear. Forget bias-plies, Jimmy went with top-of-the-line Michelin Pilot Sport radials in 225 and 345 mm. Brembo six-piston front and four-piston rear brakes are yet another indication. But you’d have to look underneath the car to get a true idea as to the extent to which this Chevelle is built. A full Roadster Shop FAST TRACK chassis brings the A-body into the 21st century with its CNC-cut and TIG-welded 10-gauge boxed ’rails, C6 spindles, beefy control arms, and 9-inch independent rear. “When I saw the Roadster Shop’s IRS I knew I had to have it because of the technology involved in it.” Penske double-adjustable coilovers, 3.50 gears, and a Truetrac posi complete the package.

Jimmy called upon his neighbors at Redline Motorsports to put together the powerplant for the Chevelle, and [later] dial in the suspension. Having previously owned one of Redline’s special edition Camaros as well as had them upgrade a number of Corvettes and Fifth-gens, he had become fast friends with owner Howard Tanner. Though Jimmy is no stranger to boost, he wanted to keep things simple with this build and stick to naturally aspirated. A Callies 4.100-inch stroke crankshaft with complementing forged rods and Diamond 4.130-inch pistons combine for 440 cubic-inches. Clevite 77 bearings and Total Seal rings marry them to the aluminum LS7 block. Mast Motorsports 285cc LS7 heads and a FAST LSXR intake manifold seal up the top of the 11.6:1 pump gas engine, which takes commands from a custom hydraulic roller camshaft. An Edelbrock water pump and Be Cool radiator keep the LS7 cool. Roadster Shop’s trick 1.875-inch headers and a custom 3-inch stainless steel exhaust system (built by Page Customs) with Borla mufflers do their part in carrying away the hot exhaust gases. A factory E38 engine computer calls the shots, which has been tuned by Redline Motorsports. Through a Liberty-built TR6060 six-speed and McLeod twin-disc clutch the combo made 540 rwhp.

While Jimmy lamented that the Chevelle could use more power, he is very proud of what he had been plotting and scheming for the last few years. The build may have only taken 18 months to complete, but the seeds were sown throughout a lifetime. This is evident in so many of the details. The decisions he made were the “logical conclusions of over 50 years in the car business.” I can’t wait to see what he dreams up next. He already hinted that should the Chevelle depart his presence, there could be a second-gen Camaro on the horizon. The plot thickens.