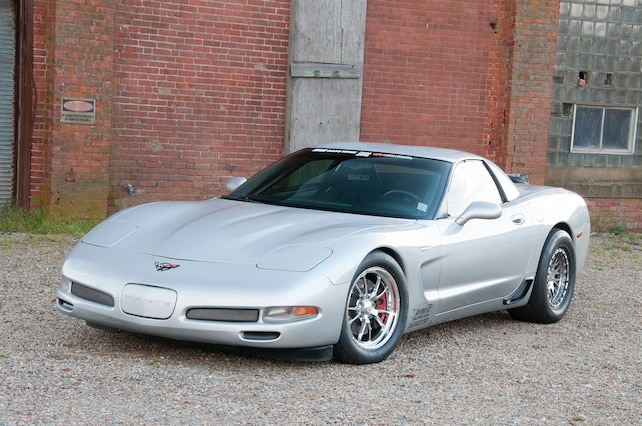 Ever since the dawn of hot rodding, there have been those subtle cars that easily blend into the landscape, never calling attention to themselves. It’s within the over-the-top segment of cars with a supercharged V-8 poking through the hood, loud exhaust, wild paintjob and mile-wide rubber that you become an easy mark for the competition. There’s nothing like seeing a nondescript two-door bringing home the win on the street or strip … the street sleeper!

Now, imagine trying to get your horsepower fix while living on a small island off the New England coast where local roads carve through its topography; a place where no traffic lights even exist. For Travis Ray of Nantucket, Massachusetts, his fascination started at a young age under the guidance of his dad, Richard, who got him involved early on with Radio Controlled race car competitions, performance magazines and his personal automotive tales. As the years passed he would learn to drive on the local beaches in the family’s 4x4s as well as keep a sharp-eye open for any hopped-up local cars cruising the streets or tucked away in remote island garages. Whatever the case, there was a definite automotive chemistry between the youngster and his dad, which he often related to after reading The Driver by Alex Roy.

By the time he was in college, Travis was deep into his first car, a 1985 Ford Mustang that he tore down to bare bones and rebuilt as a serious street/strip car complete with a 342ci V-8 matched to a Paxton NOVI-2000 supercharger, fully updated suspension and rollcage. Even though the Mustang did well, Travis was looking for performance at the next level. He had always been enamored with the styling and handling of late-model Corvettes and decided to make a move for one. After selling the Mustang he purchased a Daytona Sunset Orange 2005 C6 and proceeded to make a number of improvements to the suspension and driveline, which included the addition of a ProCharger supercharger to up the ante. Now remember, living on the island requires a 2 1/2-hour ferry ride to the mainland as well as a significant drive to the “local” dragstrip to not just shake a car down but to also compete with it. If you’re gonna play you have to be fully committed to the logistics to make it all come together. It was at this time that he made the decision with his dad to step-up the game and commit to taking on Hot Rod magazine’s Drag Week in 2013.

Participating in the event showed him first hand the camaraderie of drag racers and sponsors who are involved. While deep into the event he was sidelined with a broken rearend at Indianapolis. It was RPM Transmissions who rescued them, making the needed repairs and improvements so they could make the journey back home. Now committed to the exhilaration of Drag Week he made the decision to locate a car better suited to the grueling requirements. An online search turned up a very well-known car that had been originally built by Lingenfelter Performance Engineering (LPE) of Decatur, Indiana. The Quicksilver 2001 C5 was an original Stage 2 twin-turbo build, which had been built as a sister car to John Lingenfelter’s landmark yellow version that set the performance scene on fire when it debuted. This car, when originally built, featured a twin-turbo 417ci small-block linked to a six-speed manual trans that generated 1,002 hp to the rear wheels with a full-race tune. With the original owner, the two cars participated alongside each other at various events across the country for 6 years while always maintaining rock-solid results, including quarter-mile times in the 8s.

It was the car’s second owner who was offering it up for sale in 2013 when Travis found it advertised along with a number of changes since its first version, including updates to the driveline. Knowing the car had been well cared for, a visit to see and drive it sealed the deal with it being the ultimate Corvette, in his eyes, to compete during Drag Week. Let’s take a look at what makes the car so competitive and the enhancements made to the car in the last few years by Travis and his team. To lay down the basics, the car sits on the factory hydroformed frame and is supported by a factory C5 front suspension matched with Penske Racing Shocks remote reservoir single-adjustable shocks. Out back a C6Z rear cradle is in place with full factory suspension matched to Penske Racing Shocks remote reservoir single-adjustable shocks and factory sway bar. To take plenty of abuse the rearend was sourced from RPM Transmissions of Anderson, Indiana, featuring 3.42:1 gears coupled to 2,000hp axles from The Driveshaft Shop.

Since the car’s primary purpose is to deliver blistering performance on the dragstrip as well as dependable horsepower for the long haul a decision was made in 2012 (by the car’s previous owner) to contact ERL Performance of New Albany, Indiana, to build a fresh small-block. Starting with their ERL SUPERDECK1 four-bolt LS block, it was treated to a myriad of their performance enhancements, bumping the base 427 ci to 434 ci specifically designed for forced-induction and nitrous applications. Their exclusive “truss design” involves connecting each pair of head bolts through an aluminum truss allowing the load to be shared across the deck surface, minimizing deck deflection. The system also allows larger cylinder bores. The block was filled with a Callies DragonSlayer crank linked to matching Ultra Series billet I-beam rods wearing Wiseco 9.5:1 pistons that have been coated, along with the bearing surfaces. To set the beat, a GM LS9 ZR1 supercharger hydraulic roller cam offers 0.558/0.552-inch lift with GM 1.7:1 rockers while seamless power comes from a set of GM LSX aluminum heads that have been converted to six-bolt mounting.

Up top, a GM LS7 intake features a stock throttle body and PCM while 850cc injectors are fed by twin in-tank pumps by Lonnie’s Performance via an Aeromotive regulator. Added induction modifications include custom intake piping by Lingenfelter Performance Engineering. The magic comes from the LPE Stage 2 twin-turbo system that features a number of custom one-off updates. A pair of Garrett GT30 turbos with matching wastegates run at 16 psi in street tune with LPE twin intercoolers. Spent gasses dump through matching LPE headers and downpipes. Creating a perfect exhaust is a balance of performance values, and Dennis McPherson at DMC Racing in Halifax, Massachusetts, designed a custom 3-inch stainless, V-banded system with Borla mufflers designed specially and specifically for this application. Dialing in the numbers, Donald Kinder at Slowhawk Performance Inc., of Bridgewater, Massachusetts, brings it all to life with their amazing technological capabilities. Moving the goods is of the utmost importance and this is another area where the car goes straight to the head of the class. Working in conjunction with the C6Z rearend conversion, a heavily modified GM 4L80E trans by RPM Transmissions brings all the power to the pavement, featuring a Pro Torque 3,000-stall converter and Quick Time Performance bellhousing and stock GM shifter.

The car’s exterior still sports its original factory vibe while inside it features a full interior accented by a pair of Sparco Pro 2000 seats and belts, with an AEM Failsafe boost gauge, AFR (air/fuel ratio) gauge and EGT (exhaust gas temperature) gauge to monitor the vitals. DMC Racing artfully crafted a complete chromoly rollcage complete with swing-out door bars certified to 8.50 safety requirements, as well as the removable mountings for the DJ’s Safety Racing parachute and trailer hitch. When it comes time for the performance numbers, Travis tells us that the car weighs in at 3,500 pounds, less driver, and that it consistently runs quarter-mile times of 9.29 at 147 mph using a foot brake-style launch. He tells us that the uniqueness of the car is that it can drive 400 miles between tracks on Drag Week with the air conditioning on, change the tires, add the drag chute and door bars and consistently run in the low 9s. This is all at different tracks and elevations while on the same tune and 93-octane pump gas. It’s a proven formula and it’s a rare chance to see a car that can take on the miles, handle razor sharp on a road course and perform like it does on the strip, all while experiencing it with his dad as the copilot and to us that’s as cool as it gets.