Vintage 1961 Vette is Transformed into a Gem 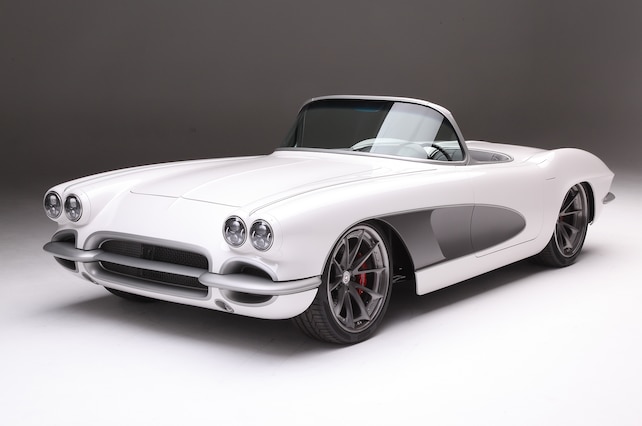 When it comes to customizing a car, folks sometimes say more is better. But also less is more. So when you do more with less, is that better? Well, Mark Carter did so on his ’61 Corvette, subtly transforming it into a contemporary street machine that lacks the foibles of the original, yet avoids excess. “The design goal was to create a unique modern car, but without resorting to any radical modifications,” Carter explains.

Unlike many restomod projects, when he first came across this 1961 roadster through a classic Corvette dealer in Arizona, it was actually in fairly good condition and complete, driveable, and reliable. There was no history available, however, and engine was not a numbers-matching mill. Since it was not a collectible show car, it was priced at a fairly reasonable $30K.

Carter’s initial plan was just to leave well enough alone. “My original intention for the car was to participate in car shows as a promotional tool for my company,” he notes. (He’s the founder and owner of E-Z UP, which makes tents, shelters and canopies, a common fixture at car shows and other events). “Which we did. But as time went by, I found myself slowly restoring the car. It was rebuilt twice.”

Why two times? Well, the first time Carter restored it he started out with the idea of keeping it original, plus a few upgrades to improve safety and handling. He changed the brakes to a bolt-on setup (so they could always be returned to stock) using a four-wheel disc brake kit. Then the suspension was rebuilt for better handling, along with the steering box, but that didn’t quite fix things as the car still tended to wander. So he went with new radial performance tires, composite leaf springs and rubber body mounts.

When it was all done, though, “It still drove like a ’47 Chevy pickup,” Carter recalls with a wince, shaking his head. “That’s when I thought about building a restomod. I loved the old-car styling but didn’t like the old handling and performance,” he relates, right in keeping with the mindset of so many Corvette fans.

Although he readily admits to not being a hard-core Corvette guy (he was already working on a ’59 Cadillac as well), he would draw on his background as an innovator and inventor (he has more than 200 patents to his credit for his E-Z UP product line). As a young man, “I was always changing things on cars,” he notes. And it would be no different on his 1961 Corvette.

The first thing was to disassemble the car and strip the paint to see what he really had. After sizing up the flaws, he set to work to correct them, along with making some modifications as well, which took about 18 months, on and off.

He wanted the Corvette to reflect the same quality of engineering as on his product line, so he tapped one of his company’s skilled fabricators, Scott Oertle, as his body man (and project manager) who was already lending a hand on the ’59 Cadillac). Providing some artistic expertise as well was Brian Stupski of Problem Child Custom Studio. This firm came up with a design concept and renderings.

As the design process progressed, Carter wanted to keep the paint scheme to a less flashy show-car color, but still garner plenty of attention with an understated, high degree of quality. He thought the Corvette would be a quick and relatively “EZ” project, but soon discovered otherwise (unlike the name of his company), and sought some additional assistance. While working on the Cadillac project, Carter had come across the crew at HR&CS (Hot Rods & Custom Stuff).

Working as a team, Oertle and HR&CS sectioned the front valance for a better bumper fitment, tightening up the clearances with the body. Carter says that process ultimately required rebuilding the entire body, like putting together a giant jigsaw puzzle. After mediablasting revealed a number of patched-up areas, they tackled one panel at a time, bonding them in place as close as possible to factory clearances. Instead of using filler, they re-glassed and/or replaced about 80 percent of the body.

They also had brass trim custom handcrafted for the entire car, along with custom fabricating the console. In addition, they modified the tonneau cover and transmission tunnel, and created a custom hood peak. Once done, Andy Meeh applied several coats of PPG Envirobase Custom Mix Pearl White and Charcoal for the coves.

While the body was in process, Carter started to think about what the mechanicals should be. Even though the exterior would eventually be subdued in appearance, underneath the skin there would be much more going on.

For the cockpit, Rex Copeman crafted a leather treatment in glove-soft leather. Matching the upholstery is a leather-wrapped steering wheel from Billet Specialties with a select formula black contrast. Dakota Digital gauges grace the dash, and the sound system is JL Audio with Bluetooth.

One intriguing yet still subtle feature are the blown-glass knobs. This idea came from Carter’s interior guy, who makes similar-style beer taps for Stone brewery. The color is similar to the paint and the red seat upholstery, and caught the eyes of many onlookers. Indeed, when famed car collector Jay Leno spotted them on the car at the SEMA show, he immediately asked, “Where ja get those cool knobs?”

All told, Randy Clark and the staff at HR&CS labored on the Corvette over the course of nearly three years, and this extra effort received special recognition at the 2016 Grand National Roadster Show: 1st in class and Overall Outstanding Sport/Sport Compact. Talk about doing more with less!

Looking back on the project, it’s like the old saying goes, “You can’t rush art.” Or growing a pearl, either.