Diamond In The Rough: Tracey Morgan was looking for a decent driver but accidentally bought something very special 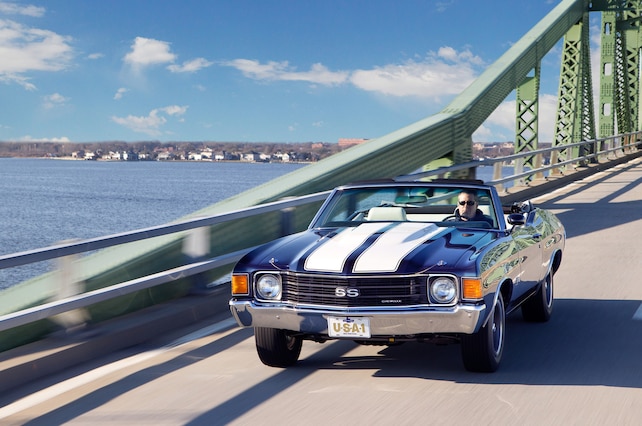 In the winter of 2002 Tracey Morgan set out to find a 1972 Chevelle SS he could drive to local cruise nights and have some fun with. The New York native had only limited knowledge about the cars and an equally limited budget but it didn’t matter because he was simply looking for a decent driver. Purely by accident, however, he instead ended up with a really special car.

“I had a ’66 Chevelle SS that I intended to restore,” he recalls, “but after some consideration I realized this car was far too rusty and lacked some of the bells and whistles I wanted, so I decided to sell it and find something better. Back in high school I spent many a day in my friend’s ’72 SS so that’s what I was interested in finding.”

Morgan offered his ’66 on eBay and simultaneously began looking for a ’72. After only a few days a very enticing listing caught his eye, a red/black SS 454, four-speed convertible. “It wasn’t represented to be an original or correct car so I just assumed it was a clone, but I didn’t care. It was a big-block with a stick and the top went down so I had to have it!”

And get it he did, winning the online auction on Christmas Eve for a mere $12,000 more than he intended to spend. Two weeks later a transport truck showed up at his door. Since the car was for sale in Florida and he didn’t intend to spend a lot for it, Morgan didn’t invest the time and money to actually go and see it so he was a little anxious when it landed.

“I’d like to say that I couldn’t have been happier but that’s not the case. I had been told the car ran great and it didn’t. It ran poorly and had been heavily molested with various period-typical mods. A Hurst shifter replaced the stock one, the Rochester was gone and a Holley sat in its place. It had headers, a scattershield, and air shocks with a valve mounted through the rear bumper. A rectangular port LS6 intake manifold was bolted to oval port LS5 heads, and so on. Although the car looked great it was clear that I had a task ahead of me to put it back in roadworthy condition.”

At this point Morgan already had way more money into the car than he was comfortable with and wasn’t sure if it was worth investing a lot more so he reached out to some friends who directed him to chevelles.com. “I got schooled pretty quickly. The people there were knowledgeable and helpful and told me straight away to post my VIN and cowl tag information, so I did. The next thing I know these guys were freaking! They explained to me that the “W” in my VIN meant the car was a genuine 454 Super Sport. I didn’t know much about specs and stats but I knew that was a good thing. They requested more numbers, including the engine, transmission, and rearend stampings. With those the guys really went crazy because it turns out the entire drivetrain was born in the car, including the M22 transmission. Now I’m thinking, well, look what I found, buried treasure, a diamond in the rough!”

A real ’72 SS 454, four-speed convertible is a treasure indeed, but what makes this Chevelle one-of-a-kind has nothing to do with its drivetrain or body style, but rather its color. As stated earlier, when purchased the car was red with a black interior, which suited Morgan just fine. It didn’t even occur to him to investigate whether these were the car’s original colors until the crowd at chevelles.com asked for the cowl tag information. It was then that he discovered something very odd—instead of the normal pair of numbers indicating the car’s original paint color the cowl tag simply had a dash, which meant that it was originally painted a non-production color. Back in the day buyers could request almost any color imaginable and if Chevrolet’s Fleet & Special Order Department approved they’d get exactly what they wanted.

The information on the cowl tag for Chevelles with special order colors varied according to which specific plant built the car. Some plants stamped in the paint code if it was a production color used on a different GM vehicle or a paint manufacturer’s mixing formula code if it wasn’t. Other plants denoted special order paint with one or two dashes where the code would otherwise go.

There was now no doubt that Morgan’s Chevelle was worth restoring but he wasn’t quite sure how to go about it. With help from his friend Harry, who owned a Mobil station, he addressed the most pressing mechanical issues and got the car running well. He thought about using it as is but quickly concluded that the rarity of the car justified a more extensive restoration. “I was recommended to a guy who I was told could restore the car. Coincidentally, he also had a Mobil station and at first all seemed to go great but I quickly lost confidence in his abilities. I realized that a gas station and reproduction parts catalog were not going to cut it, not for me and not for that car. We both deserved better.”

“Better” turned out to be Island Musclecars & Restorations in Amityville, New York. Ironically, Morgan was introduced to this shop by the “restorer” who owned the Mobil station. It turned out that the Mobil guy was having his car restored by Island Muscle Cars, which was an obvious indication that his ability was limited.

“After meeting Chris Piscitelli and seeing his operation over at Island Musclecars I was very impressed,” explains Morgan. “With Chris’s help and all of the expertise I had access to at chevelles.com I decided to do a total, 100 percent bone-stock, correct restoration utilizing the car’s original parts and restored original or N.O.S. GM parts. With Chris’s hands-on talent and my ability to research and source high-quality, original GM parts, the restoration quickly went into full swing!”

Piscitelli completely disassembled the Chevelle and mounted the bare body shell and stripped-down chassis to separate rotisseries. He restored the chassis first, replacing all normal wear items and rebuilding all assemblies. Every component was restored to its factory appearance with just a little extra sparkle in most places.

He next turned his attention to the body, which looked quite nice with its shiny red paint but not nearly as nice when stripped down to the steel. In addition to discovering the need for more work than anticipated, disassembling and stripping the body also revealed a very important detail, the car’s original paint color. “We found several areas with original paint,” explains Morgan, “and determined that it was a 1967 GM color called Danube Blue Metallic. In keeping with the theme of the restoration we would repaint it in the original color. Also in keeping with the theme, I decided that any sheetmetal that was compromised had to be replaced with genuine N.O.S. sheetmetal.”

While work on the body was progressing the 454 engine went to The Performance Engine Shop in West Babylon, New York. Gary Sharkey handled the rebuild and when the potent LS5 was put back together it looked exactly as it did at birth, including correctly numbered and dated exhaust manifolds, intake, alternator, and carburetor.

After its restored body was reunited with its restored chassis, the one-off Chevelle looked like a car again, but it was still a long way from completion. “At this point there were endless details that needed to be addressed,” remembers Morgan. “We needed date-coded glass, a correct convertible top, a complete interior, a refurbished original 8-track AM/FM stereo, original wiper arms and blades, N.O.S. headlamps, and correct dated horns, just to name a few things. It went on and on!”

Much to Morgan’s delight, the car was finally completed in the spring of 2007. Though its painstaking, high-dollar restoration has yielded a virtually new 1972 Chevelle, Morgan has remained faithful to his original intent and doesn’t hesitate to drive the car in between showing it. “The first show was Chevellebration, where it garnered a top three award from its peers. It was also First in Class and Best in Show multiple times at the Old Westbury Gardens AACA show. I enjoy the shows, but the best part of owning this car is hitting the pavement, hanging out with other car nuts, and sharing all of the great stories associated with it!”