Here’s an LS3 Powered 1970 Chevelle SS for the Missus 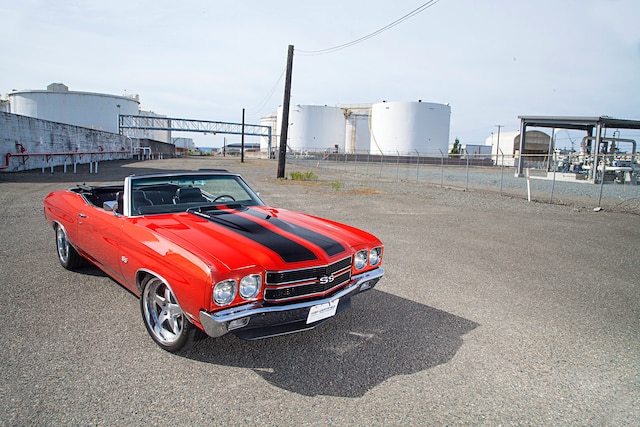 Enviable is the person related to someone with a car collection. Think about it, access to a bunch of stuff, presumably, you’d like to have. Every cool automotive event, you’re in. Taking in the scenery, you do. Sure, it’s neat to know someone with cool cars. Of course, that’s what it looks like from the outside. Spend some time on the inside and it often looks a little different. Yeah, you get to do the shows but you’re at the mercy of your patron. The scenic drives … you’re not the one who chooses to go where, or even when for that matter. A shortcoming to having access to a car collection is … they’re not your cars.

Sita Mitchell’s husband, Phil, has a lot of cars. A lot as in a Chevrolet dealership in Sumner, Washington. And Sunset Chevrolet has done well recently, well enough to grant Phil the ability to amass a collection of earlier specimens of his company’s products. As an example of the grade of his gear, a few years ago Sony put his black 1967 Nova in its Playstation game Gran Turismo. But here’s the thing: you don’t just let your pals climb all over the seats to go to lunch somewhere in a car that made it into a video game. You could but your patron would likely protest. I mean you could scratch something. Yeah, it was neat at first but Sita wanted a little more.

A little more turned up on eBay as a 1970 Chevelle. With an LS swap, glassy orange-pearl finish, and updated suspension it looked like a turnkey driver. But as Chris Holstrom recalls, “It was a car with some surprises.”

Unlike most online deals, things actually looked better upon closer inspection. The car had good bones. And more importantly, it had good skin. “It was crazy because the paint and body was meticulous,” Holstrom continues. “The jambs and everything, they did a really great job on paint and body. Then it’s like they threw a bunch of junk parts in it, like an old dash, old interior, old everything.”

Holstrom’s crew remounted the drivetrain, but rather than plugging the old drivetrain back in, Phil made a few calls for a new one. This one’s from GM Performance’s Connect & Cruise lineup: an LS3 with a 4L70E computer controlled automatic overdrive transmission.

To preserve the old-car vibe CHC replaced the plastic plenum with a more conventional Edelbrock manifold. The factory throttle body mounts to it by a MAST adapter. Part of the objective was to make the engine at least resemble an engine that would’ve come out of such a car. In this case, Holstrom justified the cowl-induction hood by using the appropriate housing. “I modified it like crazy to get it to sit low,” he says.

The engine also sports a Vintage Air Front Runner system. Ahead of that is a Be Cool radiator with an Undercover Innovations radiator closeout panel. A pair of Ringbrothers hinges and stoppers support the hood. Kooks headers lead to 3-inch pipes with MagnaFlow mufflers that surround a Tanks Inc. stainless steel OE-style gas tank.

Though fresh as the result of a complete renovation at CHC, the interior remains largely stock. The car began as a bench-seat model but Phil found some freshly re-covered buckets. The only significant changes include a Shift Works quadrant to make the shifter jibe with the overdrive transmission and a set of Classic Instruments retrofit gauges to make the car jibe with the modern world.

The LS3 came in the Corvette and Camaro, cars Chevrolet deemed worthy for big brakes. A set of 14-inch Baer rotors and six-piston Arizona Copper calipers give this car a distinct advantage over its newer (and in most cases, heavier) brethren. You can see them through the spokes of Forgeline SO3P wheels. They measure 19x8 front and 20x10 rear and wear 255/40ZR19 and 295/35ZR20 Michelin Pilot Super Sports, respectively. With a smattering of new trim and freshly painted bumpers, the car was christened done.

Naturally, there are differences between Sita Mitchell’s ’70 and the cars in her husband’s collection. It’s inevitable, really; they’re for two distinctly different people. But the biggest difference is invisible. And that’s to say, she can go wherever, whenever she wants. And that’s way better than just knowing someone with a bunch of cars.