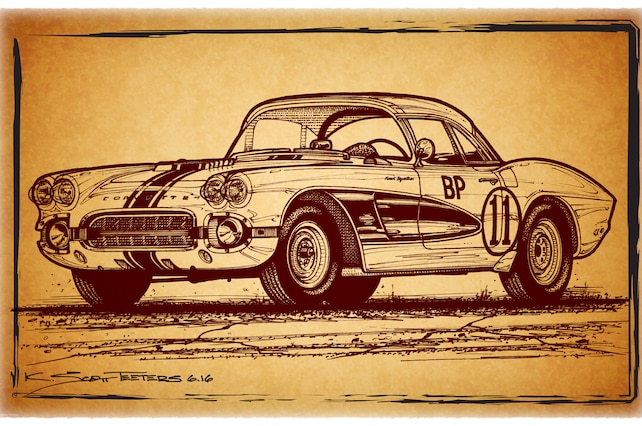 Today’s C7.R Corvette race cars, as well as the other cars that race in the GTLM class of the WeatherTech SportsCar Championship series, are modern marvels of production-based sports cars—taken to the MAX. Although built on a production C7 structure, the C7.R cars cannot be road cars, as they are set up for the track. Grady Davis’ 1961 Gulf Oil Corvette, with its full complement of what was unofficially known as Duntov’s Racer Kit options, could hypothetically be driven on the street.

There was another package of goodies that were supplied to several of the Corvette racers but was not on the RPO list. Unofficially known as “The Sebring Package,” the extras included: a vented hood, stiff front antiroll bar, aerodynamic “cone-shaped” clear headlight covers, and a 37-gallon fuel tank. It’s too bad Chevrolet didn’t make the complete “racer kit” as a separate Sebring Corvette model, a la the C5 Z06. Bench racing is such fun!

This combination of factory parts enabled Corvettes to be competitive against Porsche, Aston Martin, Ferrari and Maserati. The 12 Hours of Sebring was the first big race of the 1961 season. After 12 hours of brutal track fighting, three “Duntov Racer Kit” equipped Corvettes took First, Second and Third in the GT-3000 class. First place went to Delmo Johnson/Dave Morgan in car No. 14. Second place went to Bud Gates/Harry Heuer in car No. 83. And Third place went to Don Yenko/Ben Moor in car No. 11. The European grip was smashed.

There are many variables in endurance racing but preparation is king. Although technically “amateur” status because the winning Corvettes weren’t “factory-backed” racers, all three Corvettes were very professionally prepared. The 12 Hours of Sebring event was an FIA sanctioned event, but Don Yenko took his Corvette racer into the SCCA B/Production series and dominated the class by winning the first five races. The competition was suspicious so after the fifth victory the car was torn down and found to have a “non-factory” aluminum flywheel. The setup was allowed in the FIA series for Sebring, but not in SCCA racing. Yenko himself received a six-month driving suspension but the car was allowed to race, with the correct steel flywheel.

Dick “The Flying Dentist” Thompson was one of the hot shoe Corvette drivers of the day. Yenko hired Thompson and guess what happened; Thompson won every race for the rest of the season—steel flywheel and all! The Duntov Racer Kit provided almost everything and totally caught the competition by surprise! After winning the championship, the car was on display in the Gulf Oil Corporate headquarters, under a large banner that read, Production Sports Car of the Year, 1961.

But wait, there’s more! Yenko was still under suspension when the 1962 season started and wasn’t able to race the Grady Davis car in the first race of the season, so Dick Thompson filled in and scored another victory. When Yenko was back in the driver’s seat, he took Corvette to a second SCCA B/Production championship. The car didn’t dominate the series as it did in 1961 but won the championship. With the all-new Corvette Sting Ray coming online with its RPO Z06 “racer kit” option, the ’61 Grady Davis Championship Corvette was put out to pasture.

Back in the early days, old C1 and C2 race cars were often converted back to street use. Old race cars weren’t highly collectible back then; most were sold and resold, eventually ending up in junkyards. The Cunningham 1960 Corvette racers were returned to street Corvettes, only to later be discovered and restored. Kevin Mackay, owner of Corvette Repair, found the Rebel 1968 L88 racer in an auto salvage yard—a total derelict. Used up old race cars are easy to spot, however, old racers converted back to street use can have their known racer background disappear after a few owners. Owners of the converted Cunningham Le Mans racers likely had no clue their Corvette once raced at Le Mans! It sounds odd today, but happened.

That was the story with the Grady Davis’ 1961/1962 SCCA B/Production Champion Corvette. The 1963 RPO Z06 was an excellent package and would have carried the racing torch for Corvettes had the Shelby Cobras not arrived. The 1967-’69 L88 package finally made Corvettes competitive again, but by then no one was paying attention to what happened from 1960-’62. Somewhere in the mid-’70s, after the car outlived its usefulness as a corporate display piece, it was converted back to a street Corvette, and used as a customer attraction car at a Cadillac dealership.

The car’s pedigree was almost lost when photographer and author Richard Prince found the Grady Davis car in 1990 and restored the car back to the configuration and livery of the 12 Hours of Sebring race. By the time the car arrived at the Mecum Auctions’ Dallas 2012 event, the car was awarded the NCRS American Heritage Award, was inducted into the Bloomington Gold Great Hall and was part of the Bloomington Gold Special Collection. Mecum Auctions stated on the Lot Description page that the company PROVE IT had verified that the car to be auctioned is the restored 1961 National Champion Corvette, as claimed, and would provide the full report upon request.

Famous old, name race cars are always a popular attraction at the big car auctions. Corvette race cars will likely never generate the mega-millions that the exotic Ferrari and Porsche cars get because there are so few of the European exotics built compared to the large production of Corvettes. Plus there’s the stigma of being “mass-produced” for the Corvettes, verses “hand-crafted” for the European exotics. It took three times “on the block” to auction the Grady Davis Gulf Oil Corvette. At the 2012 Mecum Kissimmee Auction in January, bidding stopped at $850,000 and did not meet the reserve. Later at the 2012 Mecum Dallas Auction in September, bidding stalled at $1,100,000, so as they say at a Mecum Auction, “The bid goes on …” Finally, at the 2013 Mecum Monterey Auction, Lot S156 “Sold” for a whopping $1,400,000!

Restored old race cars must have a serious racing pedigree to pull in the big bucks. The Grady Davis A/Production 1962 327 Corvette won 13 races in 1962, plus the SCCA A/Production Championship. When the fully restored car went on the block at RM Sotheby’s Fort Worth, Texas, auction, the car sold for $1,650,000! Yet at the 2015 Mecum Monterey Auction, the fully restored John Greenwood Sebring 1975 stalled at just $300,000. “No Sale!” Even though the Greenwood Corvette had the honor of being the Top Speed Record Holder at Daytona for almost two decades with a speed of 236 mph in 1975, the car only won two races in 1974: the Talladega 200 and the Daytona Finale, plus four pole positions, but no championship—hence, no big sale at auction.

What is most amazing about the Corvette racers of the early 1960s is just how “stock” they were. And yet, with the right parts, preparation, driving talent and luck, Corvettes slayed Europe’s best.