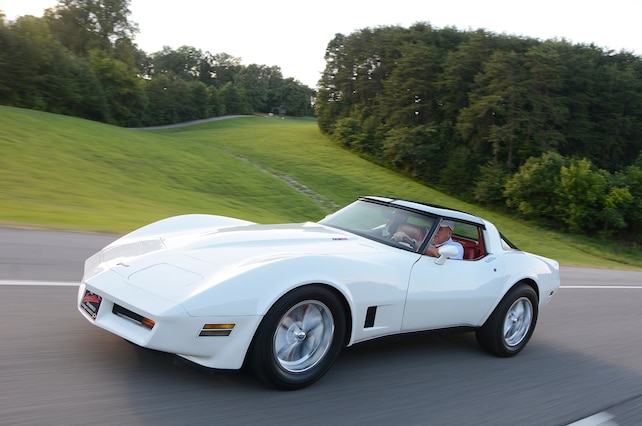 If you’ve ever restored an old car, you know that it’s never as quick, cheap or easy as you might’ve hoped. Usually, when we mention rebuilding a car from the ground up, we’re referencing a Corvette from the 1950s or 1960s. The fact of the matter is that the cars from the 1970s and 1980s need the same amount of attention to detail—sometimes more, when you add a little bit of technology into the mix. The 1980 Corvette in front of you is a prime example of a late-model C3 that needed some refreshing, but like most automotive tasks, it snowballed into a full-on rebuild. The car belongs to Terry Beaty of Cleveland, Tennessee, and he started the build a few years ago.

Terry has built a number of vehicles through the years, and when he purchased this Corvette from a family member several years ago he wanted to upgrade it to modern standards. Leaning in the direction of an LS engine swap, he consulted with Ryan Martin at LSX Power and Development, a local shop that specializes in LS swaps and high-performance builds. Terry didn’t just stop with the fresh engine and transmission—he went all out with a full suspension rebuild and a host of items to make the car accelerate, stop and handle better.

Underneath, you’ll find that the only thing Ryan Martin didn’t modify is the original frame. Up front, he added Hotchkis lowering springs to bring the car two inches closer to the ground while also increasing the spring rate. Bilstein Touring shocks offer excellent spring control and a larger sway bar from Eckler’s keeps the car level in the corners. As a part of the LS swap process, Ryan added a Detroit Speed power steering system and made it work with the original steering box. Out back, he replaced the stock spring with a 330-lb/in fiberglass monoleaf spring and added a sway bar. Another pair of Bilstein shocks control the ride in back, while adjustable strut rods help stabilize the rear suspension and get rid of the dreaded wheelhop.

The heart of Terry’s revitalized Corvette rides beneath the stock hood, and the efforts of Ryan Martin resulted in a factory-appearing engine swap. All of the lines, hoses and brackets look like Chevrolet should’ve made it this way in 1980, and the fact that it’s making nearly four times the horsepower it did in stock trim is enough to keep a smile on Terry’s face. Ryan used a BluePrint Engines 427ci LS3-based stroker engine for the base of this killer setup. The bottom end is made up of a Callies 4.125-inch crankshaft, which slings a set of Callies Compstar 6.125-inch connecting rods and Diamond Racing pistons into motion. Atop the 427ci stroker is a set of LS3 cylinder heads from BluePrint Engines and they’re packed with Brian Tooley dual valvesprings, Comp Cams pushrods and stock rocker arms. A custom-grind blower cam from Comp Cams motivates the valves to take advantage of the Edelbrock E-Force supercharger that rests on top of the engine. Ryan plumbed the fuel system starting with an original-style tank, twin Walbro 255-liter-per-hour fuel pumps and all new lines. Ignition consists of a GM Performance Parts engine management system, while In-Tune Motorsports handled the tuning using HP Tuners software. With 12 psi of boost from the supercharger and a tank full of 93-octane pump gas, this setup is good for 750 horsepower.

The supercharged LS engine offers an aggressive exhaust note thanks to Sanderson headers, which lead to MagnaFlow mufflers and a 2 1/2-inch exhaust system fabricated by Jimmy’s Pro Muffler in Dayton, Tennessee. An aluminum radiator keeps the engine cool, while a Vintage Air system keeps Terry and his wife, Patsy, cool in the summertime. Inside, Terry grips a Hurst shifter, which is connected to a TREMEC TKO-600 five-speed manual transmission. Ryan used an American Powertrain kit to adapt the late-model overdrive transmission to the 1980 Corvette, and utilized an LS7 clutch. Moving farther back, the rearend is a cast-iron centersection with 3.73:1 gears from a 1977 Corvette.

In terms of aesthetics, Terry’s Corvette is a plain white wrapper with a stock body and a Classic White paintjob. Bobby Ledford at Cleveland Collision Center straightened the body and laid down the fresh paint. Inside, Kyle Wilson at Fully Loaded Interiors refurbished the interior with OEM-style red and white two-tone upholstery. The dash is a Mid-America remanufactured unit while the stock radio was tossed in favor of a Kenwood CD player.

After a major overhaul and approximately 750 horsepower of supercharged LS madness, Terry is finally enjoying some seat time in his 1980 Corvette, which feels more like a new ZR1. The modern powertrain gives this car plenty of grunt, while items like an updated air-conditioning system provide just the right amount of comfort for this wolf in sheep’s clothing. Even though the restoration process spiraled out of control, the finished product makes it worth the time and money that it took for this snowball to reach the finish line.

Jeff Monchilov's 1980 Chevy Corvette C3/C6 is a different kind of hybrid. Click here for more details on this great car or check out the April issue of Vette Magazine

In this feature article VETTE takes a look at Tony Zappia's 1980 Chevrolet Corvette, which has been restored and is powered by a stroked ZZ4 small-block Chevy engine - Vette Magazine